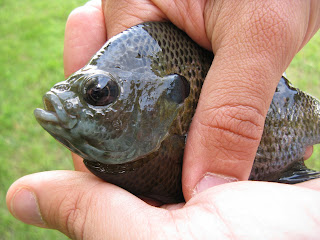 I've always had this secret interest in fishing. Fly fishing specifically, because it looks so rad, but fishing in general has always drawn me.

On Memorial Day, I finally had the chance to try my hand at it. Drew and Alicia invited us to join them at Drew's classmate's mother's house, which is about an hour from Chapel Hill in the middle of nowhere. This family maintains a large pond with fish, and they gave the Whittiers a generous invite to come use their poles and fish. Here are Drew, Alicia and Korven. They actually know how to fish, and were good at it. 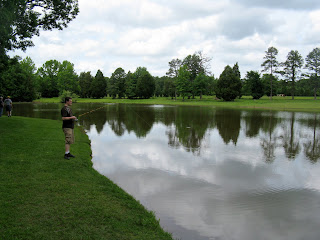 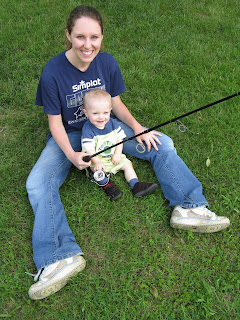 The following is a photo of me and the fish I reeled in. Drew and Alicia were generous and said that whoever reels it in caught it, but really, the fish was already hooked when I picked the pole off of the ground, and completed the arduous task of rotating the thingy that reels in the fish.

I also strategically placed the fish much closer to the camera than I was, so that the angle would expand its size. In reality, the fish is shorter than the length of my hand. Clever, right? 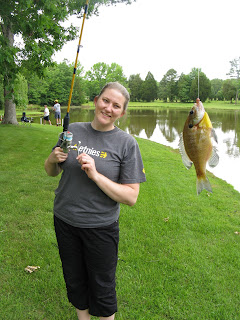 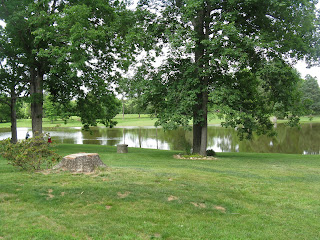 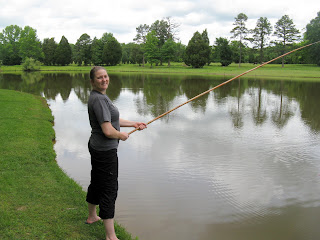 Sadly, fishing was not my thing. The whole sitting and waiting and doing nothing part was a bit too sedentary for my wiggly self. Even when Alicia suped up my hook with the last five worms so thickly that the thing looked like a popsicle, I was no good. The fish made off with my bait while I was busy looking around. The only thing I caught during the outing was a pair of trees.

My mom, on the other hand, had some real skills. She made her way around the edge of the pond catching fish after fish... 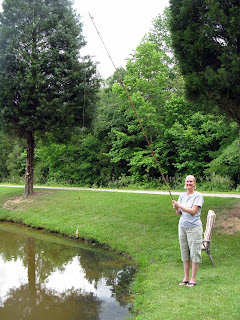 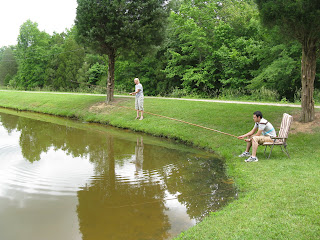 Marcos was also good at fishing, which didn't surprise me. After a long while of trying to get a bite, I let him have my pole for ten seconds to show me what I was doing wrong, and he immediately got a bite and caught a fish! Maybe I'll be better at fly fishing... 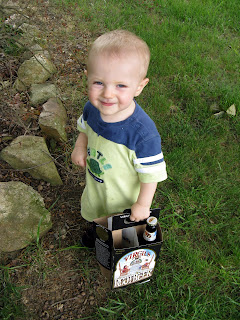 I love fish. I like growing them in the koi pond. I even like eating them (not the koi), but they don't like it so much. So I just look. Dad

What a great post! I, too, have a fascination with fishing, particularly fly fishing. (I think it all goes back to my love of the film "A River Runs Through It"... such a gorgeous film, and let's face it, there's something kinda sexy about fly fishing). :)

Anywho, sorry I haven't gotten back to you on our plans for next week yet! There have been a couple changes, so we're still trying to figure things out. I'll let you know soon, though! :)