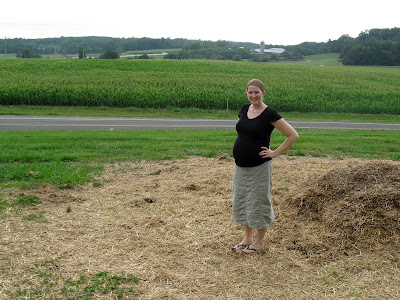 We have a few favorite local digs, and Maple View Farms for ice cream in the evening is one of them.  Last week we met up with friends for Family Night at the Farm, and I asked Marcos if he would snap a few photos so that I could record the fact that I am indeed having another baby.  If my frequency of taking photos this pregnancy compared to last is any indication of what it will be like taking photos of this new little guy compared to Gigi, he's doomed.  Last time I was fascinated by my growing body and took photos every step of the way, and this time I think I have had two taken of me.  The two featured here.  I'm banking on this baby being a lot cuter than me though, so I think we might be safe. 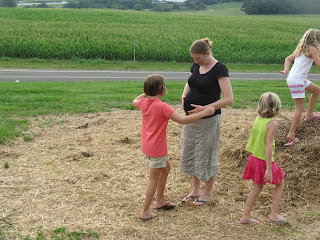 As you might have noticed, I'm fairly gigantic.  I see a look of worry in people's eyes when I say I still have three months until due date, but for some reason I love it.  For me, my main enjoyment is being past that "I ate too many cookies" in-between stage, when your body looks severely torn about committing to being pregnant.  I'm very committed.

In the photo above, the girls were trying to see if they could reach their arms all the way around my middle.  Awesome. 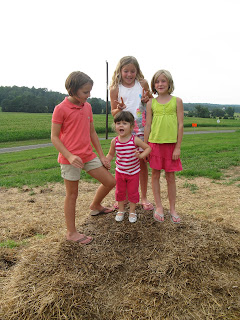 We're still working on a name for this little one.  Unlike Giovanna, who was named three years before she was born, we have had a hard time finding a boy name we both love.  We finally came to some top contenders the other day, and we're thinking about bringing our names with us to the hospital this time to see which one fits.  We have a few elements that we're set on, and a few that we will wiggle with, and we're not even that keen on sharing yet.  What a difference from last time, when Gigi became Gigi the day we had our ultrasound, and we had even picked out her personality... 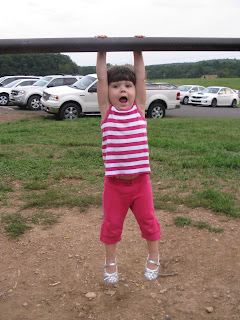 All in all, this has been a great pregnancy.  I've been a little more achy this time, but the first trimester was calm and now I get to feel him moving all the time.  Like the first time around, I have very vivid and crazy dreams though, which make me so grateful for my life.  I wake up, and suddenly I am back to sleeping with my love, my sweet little one is in her room singing to herself, and I have a normal job and good people in my life.  Vivid dreams have made me more grateful for my reality.
Posted by Metta at 12:44 PM 2 comments:

Moving in has been a particularly slow process this time.  Maybe the "unfinished" look is just starting to bother me less and less, or maybe after so many rentals I'm just feeling like the only walls I'm going to really care about someday are the ones I own. 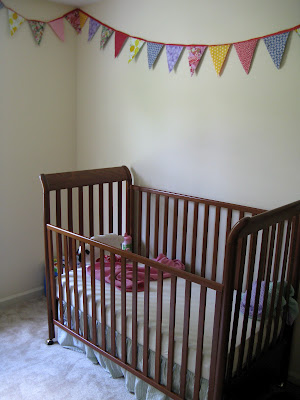 But in any case, piece by piece, room by room, things are coming together.  This move I knew it was time to pull Gigi's room together in a way that was going to support her developmental stage (i.e. she needed to be able to clean up her own toys in a safe way), and so I spent some time doing research on toy storage ideas that we could live with.  Eventually we decided to go the IKEA Expedit-designed shelving route, and I am so glad that we did.  The Expedit series is really sturdy, I love the birch finish, and there are so many options for compatible storage boxes that when we move this shelving into a public space someday I can get nicer baskets and dress it up.  The best features of course are that Gigi can pull out the boxes, clean up her own toys, and push them back in.  One of our house rules is that before she plays with a new toy she needs to clean up the mess from the last one, and she's been doing well keeping her space fairly tidy.  Who knew? 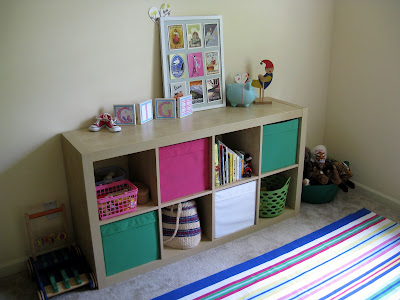 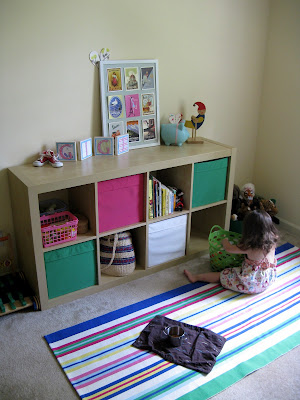 Bedroom-size wise, Gigi was the one to get majorly shafted in this last move, since her space is probably only half the size it was at the last place.  But she is oblivious to things like that, and it makes me so grateful to have a child in my life, to remind me which things truly matter.

But then again, it was she who had a melt down recently when I stirred her cereal into her milk, so I guess her wise moments are kind of hit and miss.

Yesterday we attended my officially least favorite church meeting ever.  After five years of living in Chapel Hill, North Carolina, and intentionally selecting homes at each move that were within the ward boundaries of the Chapel Hill 1st Ward, the boundaries were shifted around us and now suddenly our part of town is in the Chapel Hill 2nd Ward.  Did I mention that we've been trying to avoid this for five years?

I wore all black to the meeting because I suspected a disastrous change, and I cried, and swore at Marcos when he said I needed to put on a happy face, and then left the meeting to get some fresh air and walk around the building a few times. The wife of our new Bishop gave a wonderful talk about the difficulty and beauty of living in a breathing growing church, and the heartache that comes with these types of shifts. She said exactly what I was feeling. Especially after serving in the Relief Society presidency these last three years, and stretching way beyond what I was really able to do, or wanted to do, I felt incredibly sad to lose my weekly contact with so many women that I had rubbed shoulders with, and received feedback from, and given feedback to, and been frustrated and angry with, and been so impressed and moved by, and with whom I had grown together.

Sometimes change is so abrupt.  How could I even begin to say thank you, or good bye?

But the mourning lifted, and at night we went to visit our friends who live in the Chapel Hill 2nd Ward and their fine neighbors, and they all gushed about the wonderful energy of our new ward, and the great leadership, and the kindness and activity of its members, and a part of me became excited for this new adventure.  I left their home feeling refreshed and hopeful that this will be a great new experience for our family. 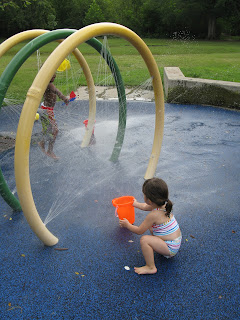 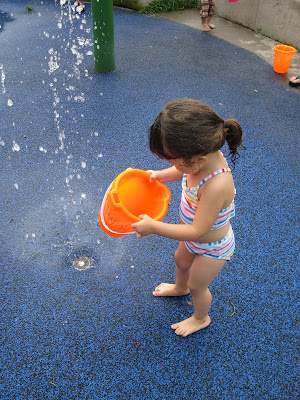 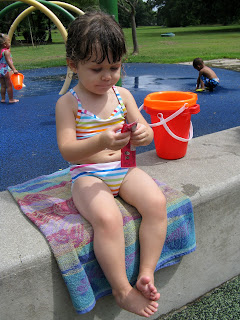 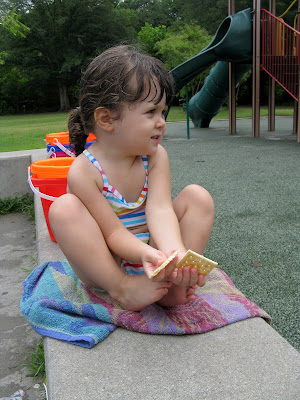 Oddly, this year we found ourselves rolling up on the Fourth of July with no big plans for how to spend the day.  Friends we had celebrated with in past years had other plans, and we realized too late that maybe WE should have taken the initiative to host something special.  A patriotic brunch after catching a parade?  Fireworks?  Picnic lunch out at a park?  But I need not have worried about our day being full of fun.

The night before the 4th, we took Gigi to a Princess Party for our 4-year old friend Aleah.  Back in February I found a scrap of pretty seersucker fabric at the Durham Scrap Exchange (a huge warehouse full of scraps and used junk), and after more than a year of eying a tutorial online I decided to roll up my sleeves and make Gigi a skirt for the Fourth of July.  So, all that to say, Gigi went to the party as "Princess America".  I know it was a stretch, but all she had to do was yell "I am Princess America!" a few times around the house and it felt real.  I was crossing my fingers that we wouldn't show up at the party with every girl and boy in royal garb more reminiscent of a Disney movie, and we were in luck.  It was a pretty good mix of royalty, and normal everyday clothes.  Gigi fit right in. 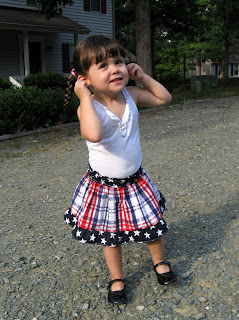 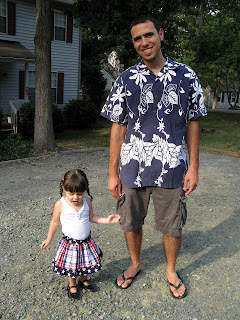 And then, because I was channeling the holiday vibe, and we all know that my brain became more holiday oriented after my first child was born, I decided to make some treats to take to the party.  They were YUM and fun to take, although they were quite a labor of love and I may not ever make them again.  Who knew that having sticky webs of melted marshmallows and rice crispies stretching from your fingers could be so traumatizing?  But right when it looked like a losing battle I finally beat them into submission. 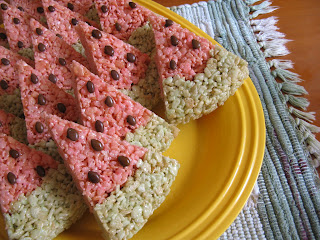 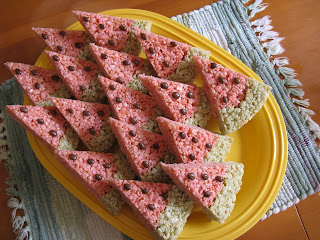 After a great birthday party, and a late night to bed for Gigi, we woke up early on the Fourth of July to play American football at the park with friends.  Marcos and I played for a solid hour and a half, while Gigi caused general mayhem on the sidelines with abandoned shoes and hats. 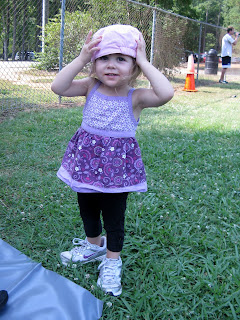 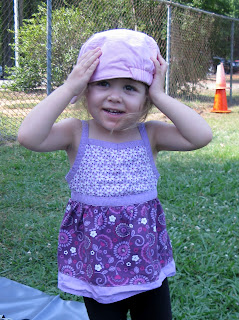 From football we rushed home to prepare sandwiches, and took a picnic lunch over to our friends the Bush's house to share for a holiday celebration.  My mom came with brownies and watermelon, and it was so nice to eat lunch with our friends and family.  We don't get to see the Bush family as often as we used to, and we were reminded how much we love them.  And Gigi played so seamlessly with their kiddos...  it was dreamy to be able to be present with the adults without having our attention somewhere in the next room monitoring her social interactions.

From lunch, it was home for long afternoon naps, and a break from the heat of the day.  Then up for an early dinner, to Tutu's pool for fun swimming time in the evening, and then to UNC hospital decks to watch the fireworks at night.  Our chosen location for fireworks wasn't great, since most of the fireworks didn't actually clear the tops of the hospital roofs and we only saw maybe a quarter of the total show, but it fit Gigi's attention span perfectly, and we were able to enjoy shows over in Carrboro from our vantage point.

And really? After hearing about what happened over in San Diego this year, I felt like our fireworks show was just. right.

Happy Fourth of July everyone!  I love how Rosa Swanson said it at church last Sunday - although America has her flaws and we have work to do and historical wrongs to right, what a privilege and blessing it is to live in a country where we have the freedom and liberty to try for improvement and progress and to live free and become the people we want to become...
Posted by Metta at 11:12 PM 1 comment: