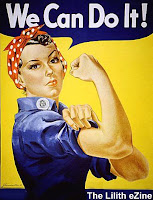 One thing I loved about being a student was that I had access to the perks that come with being part of a University. Whenever there was an interesting lecture going on, or a cultural event, I usually heard about it and tried to be there.

One of the lectures I attended this past semester that left an impression on me was a part of a week-long series of workshops and lectures hosted by the Carolina Women's Center called "The 'F' Word", which was all about feminism. The particular lecture that I attended was about Third Wave Feminism, and it was a total eye-opener.

You see, I've always had feminist leanings, because to me it makes sense that women should have access to the same legal, political and health benefits in this country that men enjoy. But the title never seemed to fit me perfectly, because the word "feminism" comes with all of the baggage left over from Second Wave Feminism. Baggage that doesn't really fit me. But whoa, whoa, whoa, whoa... third wave? Second wave? Let's review.

In the history of feminism, the movement is typically broken up into three genres or "waves". The First Wave of American feminism occurred at the end of the 1800's and the beginning of the 1900's and was led by suffragists such as Elizabeth Cady Stanton, Susan B. Anthony, and Lucretia Mott. Their fight was for equal property and contract rights, as well as access to the vote for women. At that time, women were virtually owned by their husbands, and so in some sense they were fighting for gender equality on a very basic legal level. In this day and age, I doubt we can accurately imagine how much courage it took for those women (and men) to stand up and be something and say something.


The Second Wave of American feminism moved alongside the civil rights movement of the 1950's and 1960's. When we think of Feminism, the images that come to mind are usually from this era: Bra burning, man hating, feminazis, Betty Friedan's controversial book The Feminine Mystique... all of these were relics of Second Wave Feminism. Women at this time were fighting for political equality and the end of gender discrimination, as well as freedom from the rigid gender roles that had played out in post-WWII American suburbia.

There are some very valid criticisms of this Wave of feminism, such as the movement being a middle-class white movement that largely excluded minority women, and that the movement did not take into account the varying aspirations of women - those who preferred to be homemakers, as well as those who despised the role. However, my feeling is that we have no idea how much ground was covered by those movers and shakers. As a twenty-something year old female in the year 2009, I have access to achieve virtually anything that I really, really want to achieve, and many of my streets lined with gold were paved by women (and men) of this era. 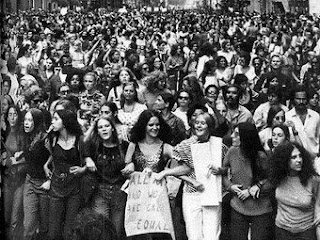 And then comes chapter three. Third Wave feminism is a child of the 1980's and 90's, and is sort of where feminism is today. In general, Third Wave feminism cuts across the boundaries that the Second Wave couldn't, such as the lines of racial and ethnic and sexual differences. I think what I like best about the Third Wave is that it recognizes that women can be active feminists, and NOT conform to a lot of the stereotypes that are associated with Second Wave feminism. For example, I may not be totally up to date on shaving my legs (which could get me an enthusiastic high five from a hard-core Second Wave feminist who believes that me shaving my legs is a sign of my bondage to the societal expectations dictated by men), but I also really like some typically feminine pastimes, such as cooking, sewing, and decorating my house. Third Wave feminism says bring it all! Bring your energy, and your activism, and your kids and your knitting needles.

This sounds more like my kind of movement.
Posted by Metta at 1:12 AM

I am standing right next to you on this one. Although, sometimes gavin suspects that my not shaving frequently is less of a social statement and more of laziness, i say it's BOTH. But, i still love hanging my cloth diapers on the motorcycle in the garage to dry. go girls!

I love this post. There are obvious differences, strengths and weaknesses, but we are all God's creatures, great and small. We should respect those differences and revel in this life.