Fatherhood at its best

Today at work I had an appointment with a family I meet with weekly. Lately I have been coaching the mom through playing with her six-year old son and teaching her how to use positive play skills to strengthen their bond. The mom and son live in a small home in a low-income neighborhood, along with two older generations of the family and a flow of loving people who seem to always be coming and going. 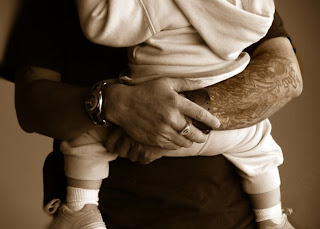 The father of the boy has been in prison for the past three months, so I was surprised to see him in the home today when I arrived at the door for our afternoon appointment. I had met him once before, and it was apparent that his son thought the world of him. So today when I was told that I would be coaching the dad through play instead of the mom, I was inwardly having a party. What can I say? Dads who play with their kiddos just give me a peaceful feeling about the future.

And sure enough, this dad was a born natural at making that one-on-one time with his son worth gold. He was fluent in the language of specific praise and positive feedback, and his enthusiasm was hard to beat. I stood in the doorway to the adjacent room, with the walkie talkie that I barely needed to use (I coach into a small ear-microphone that parents wear until they learn the skills by themselves), feeling so appreciative of this man who was locked up last week and was now on the floor playing with his son.

From my position in the doorway, I could not see the boy, who was playing with the matchbox cars on the other side of a large couch, but suddenly his little head popped up from behind the furniture. He flashed me two big thumbs up, and mouthed the words "This is going so good!".

yay for dads in general and yay for people who get out of prioson and BOOO for over crowded prisions that serve little purpose in our communities,

What a fulfilling role you have! I like how you said that dads playing with their kids brings hope for the future. So true. How much kids need both their parents with lots of love! thanks for sharing.