A craving for stuffed peppers...

Eight years ago the obsession started. While backpacking through Greece, my German sister Melisande and I followed an urge to climb a mountain and found ourselves in the warm kitchen of Katafigio Alpha, a hikers lodge nestled under the three peaks of Mount Olympus. Guests weren't allowed in the kitchen, but looking back, we were really only guests for about three hours before the woman running the lodge saw me drying dishes and asked us to stay and work for the next week or two. 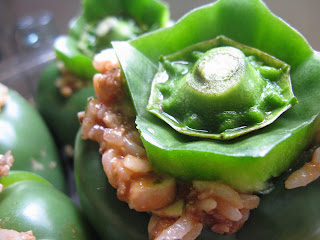 Our favorite part of life on Mount Olympus? That everything was Greek: language, culture, making music at night outside under the stars looking over the Aegean Sea, and FOOD! Maria, our friend and the chef at the lodge, made stuffed green bell peppers that my tastebuds have still not forgotten... 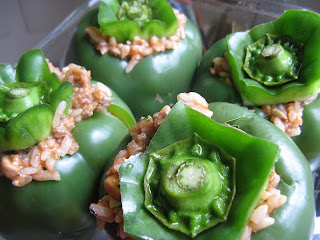 So, two days ago I attempted to bring the glory back into my life, and although it was a great meal, I still look forward to the day when I can watch Maria work her magic. Next time, I will take notes... 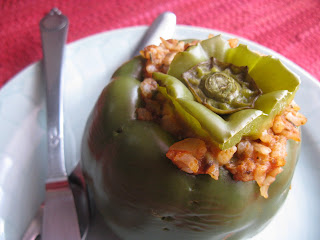 Stuffed Green Bell Peppers
Okay, who am I kidding? I don't really follow recipes when I cook, but I'll try to give a general idea of how I made these...

But the peppers! While scanning a zillion stuffed pepper recipes online to get an idea of the ingredients I should use, I came across the direction over and over to boil the peppers in salt water prior to stuffing and baking them. I will send kisses to the person who can tell me the reason for this, although I suppose that it has something to do with helping the peppers to retain their water through the baking process?

So, the order is: put on the rice (don't put too much water); cut the tops off of the peppers, de-seed and place in boiling salt water; attend to cooking the meat with onions or garlic, with seasonings and salt and pepper; and then pre-heat the oven for 350 or so. After the peppers have boiled for about ten minutes, lift out with tongs, tip out the water, and place in a pyrex dish. Mix together the tomato sauce, meat and rice, and taste it! Everything is already cooked, so this is a great chance to test for saltiness. You will probably have to add more salt, because the addition of the rice and the combination with the peppers will dilute your flavor a bit.

Once the mixture is heavenly, spoon it into the peppers, pressing it in lightly to make sure that you are filling in the pepper's valleys. Place the pepper cap on, cover the dish with foil and bake for about 40 minutes or so. Most recipes say longer, but I found that since the peppers had already been boiled, cooking time wasn't too long. We ate the peppers with parmesan, and they were delicious.

I'm so excited to try it out. You were always the best cook..I loved what you would whip up on the mission.
Your post reminded me of something I had forgotten...all your crazy stories. That summer in Greece, that one summer you went to Germany. I don't know how you cram so much into your summers, but they always make great stories.

Metta, these look so yummy. I have never had stuffed peppers, but have always wanted to try them. Thanks for sharing the recipe. I'm going to give them a try.......We're getting excited to see you SOON!!

I bought peppers the other day with the intention on making stuffed peppers. However, I had no recipe or any idea where to start. You have perfect timing. Thanks!