Each year at UNC, undergraduate and graduate students who are involved in research have a chance to submit an abstract for University Research Day. My friend Kate (a Ph.D. student) and I decided to apply with our project, and we were accepted. Here we are, trying to sound smart for the UNC "Daily Tarheel" journalist who wrote about us in her article for the university newspaper. 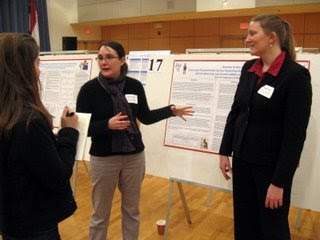 We have been involved this year in studying school success at a rural North Carolina school that is defying the Achievement Gap, to see what they are doing right.

But I'll back up... What is the Achievement Gap? Historically, free public education in the United States has been considered to be the great equalizer - the chance to give all kids equality of opportunity in life, regardless of their circumstances. Yet unfortunately, there has been a consistent historical discrepancy between white and racial minority (specifically African American and Latino) student's academic achievement since the early 1970s. This discrepancy, illustrated by the light green space in the graph, is called the Achievement Gap. 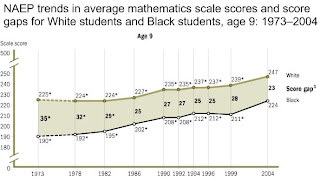 What is meaningful about the early 1970s? It was at that time that public schools in the United States were finally structurally desegregated, after two decades of wiggling through the 1954 Brown vs. Topeka Board of Education court ruling that declared that "separate is not equal". Before that time, the segregated academic playing field did not even approach a level of equality that could realistically be compared.

Why does the Achievement Gap exist? That is a wonderfully complicated question. Around the time of Brown vs. Topeka Board of Education, people vying for continued segregation used what is now called "scientific racism" to excuse oppression, arguing that there are inherent differences between racial groups that make some of us superior and some of us inferior. Now, of course, this way of thinking seems ridiculous. Flies are ten times more genetically dissimilar from one another than are humans across racial and ethnic lines.

So, what is it? Ultimately, the answer seems to be money, which is often tied to questions of power. When schools were segregated under Jim Crow laws prior to Brown vs. Topeka Board of Education, black African American schools received about 60% of the funding that white schools received. Now, although things are not so blatently unjust, inequality of funding is still a problem. American public schools are funded on a local level, with property tax dollars from neighborhoods supporting local education. Wealthy neighborhoods with big homes feed into wealthy schools with copious resources and opportunities, and low-income neighborhoods feed into poor schools, without resources and with a lesser quality of education. And thus cycles of poverty and the achievement gap continue, undisturbed. 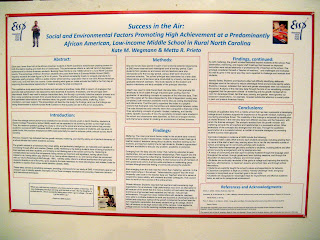 So, when we came across Gaston College Preparatory (GCP) middle school in rural North Carolina, our interest was piqued. Demographically speaking, students are about 90% racial/ethnic minority, from low-income, rural communities, and the school is designated as a public charter school. Our research exploration was: what are they doing in their school that can explain the incredible success of their students? Everyone at GCP seems to be excelling.

Our findings suggest that there are many things at play. Some of the most applicable, pertinent points were the following:

Coming out of the process of studying this school, my excitement about GCP and other similar schools is growing. Some aspects of the school are difficult to replicate - for example, they have an extended school day - but there are simple things that create an culture of success and high expectations at that school, which can be employed in other struggling schools with similar demographics and funding sources.

Our next step? To take our findings and disseminate them as far and wide as possible. 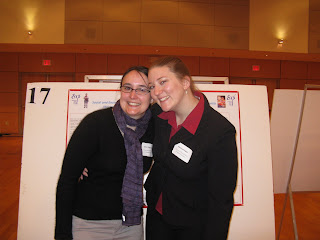 Good work! Imagine a world where every child has an equal chance at an education... Let me know when this is published so I can read it.

Sweet! You two look like sister missionaries in that pic.