Saving money... one creative thought at a time.

On Friday night we had a chance to take care of the Whittier's boy Korven for a few hours so that his parents could go out for a birthday date night.

Korven is the absolute poster child for anyone deciding whether or not to have children; he's happy, curious, calm and is totally okay being passed off to other people. Did I mention he was curious? Whenever either of us were in the kitchen preparing dinner, he was unsatisfied being held with his belly against our body, and kept twisting around so that he could see everything that was going on. If he wasn't being held facing out, he wasn't satisfied, but that was very tiring for the arm after a while. This was the position he settled on: 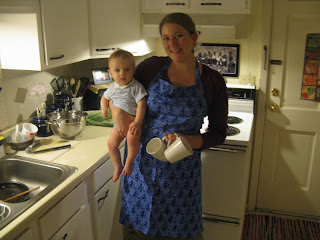 After a few minutes of juggling the boy, Marcos disappeared for a few minutes and emerged with a sturdy scarf. He tied each end around Korven's legs, and hung it over his neck, like so. 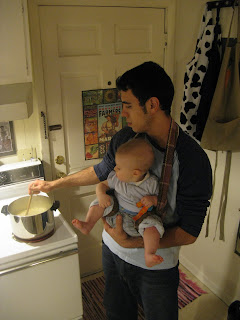 Korven was so content being suspended by his chubby little legs. Although I wouldn't try to patent this form of carrier - there are some obvious safety concerns with the rough model - it just makes me think about how much money can be saved through a little creativity... 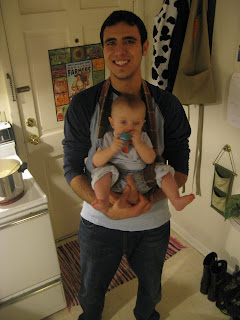 You guys make me laugh. Seriously, the out loud kind. Not just a pretend LOL, it's the real deal. You're both so cute. I wish you could babysit for me. See ya!

That is clever of Marcos to make that suspender?! looking thing. I wonder if the baby was really comfortable.

By the way, I love the book Alchemist. A few years ago, I bought it for Mike because I really liked it. We might have a similar taste in books?

Hey Metta! I just saw this post and reminds me of a book I've seen at the MCA shop. It's called Babygami and has all sorts of folding options for wrapping up the little nino. It made me laugh, but also make me want to photocopy heaps of the options!!