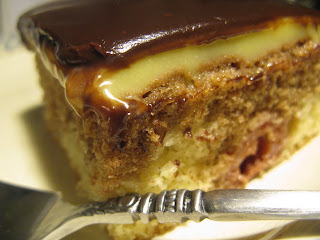 A friend of mine with a popular foodie blog posted an invitation last week to join her in an Inaugural Baking Party from home, and wanting to do something fun to celebrate President Barack Obama, I signed up to join the baking festivities.

Did I mention that I lack all baking skills? No really, there's no modesty here, I really am just awful at baking.

But being the type of person who dislikes not following through with commitments, I racked my brain for days trying to find the perfect baking idea. I looked at dozens of "Obama" cakes online, and leaned towards making a simple yummy round cake and decorating it with a flare.

That's where I should have stopped searching.

But then yesterday a new idea came to me, like a word out of thin air: "Donauwelle". As a high school exchange student in Germany, I once ate a slice of Donauwelle cake, and the memory of its deliciousness to this day has not left me. As of yesterday I couldn't even remember what type of cake it was, but I remembered one thing: that it had changed my life.

Luckily, my computer genius husband had trained me well, so I immediately sat down and asked Google some questions: what is Donauwelle, and what are the ingredients? Google was more than happy to respond, but there was unfortunate news: Apparently I was the first American to ever wonder how to make the Donauwelle cake. (Correction, there was one recipe listed in American English, but I grieved when I read it because it reminded me how unsophisticated we are sometimes, particularly in the global baking sphere. The entire sacred recipe was dumbed down, and revolved around opening mixes, making them according to the three-step ingredients on the box, layer it with a can of already prepared such and such, and then voila!). But griping aside, after reading through the few German and British recipes available, and thinking that I could probably take the parts I liked from each, I determined to try baking Donauwelle.

Donauwelle ("doh-nau-ve-la") means "Danube wave" in German, and like the waves of the Danube river, there is a wave in the cake of vanilla and chocolate batter, which are layered and then marbleized a bit to give a gorgeous cross-section. Typically, the two layers of cake are dotted with tart cherries, baked, and then covered with a vanilla cream layer, and then a chocolate ganache layer. 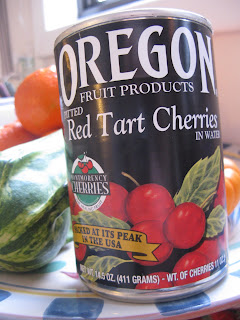 To cut to the chase, I totally bombed this recipe. Okay, maybe not totally, but there is definitely a point in the baking process after which I will no longer include any photos. Let me start as if everything went fine...

Batter: (I had to translate this recipe, and so the ingredient amounts are somewhat approximate, because they were originally written in grams, etc.)

Preheat oven to 325 degrees. Beat butter and sugar until smooth. Add eggs. In a separate bowl stir together the flour and baking powder, and fold into the wet mixture. Spread one half of the batter onto a well-greased cookie pan (traditionally this cake is not baked in a cake pan, but it is possible to make in a pan with sides). The batter should be somewhat thicker than usual cake batter. Add the cocoa powder to the remaining half of the batter, and spread the chocolate layer on top of the vanilla. Run a spatula or kitchen tool vertically through the cake in figure eights to create a marbled effect. Place tart cherries on top of the batter in rows approximately one inch away from each other. Bake for 25-30 minutes. Let cool. 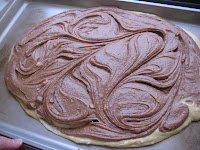 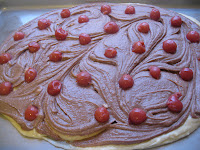 The next layer was the vanilla cream goodness. I quickly discovered that even though I thought my friends in Britain and I were using the same ingredients (I followed a British recipe for the vanilla cream), we weren't. It was mildly catastrophic.

The final layer of the Donauwelle is a chocolate ganache, which I only partly ruined. I used a (very) large amount of heavy cream for the recipe, and had to scrounge around the house looking for more chocolate to toss in, so that the tendency would be thick enough to set nicely. It is amazingly delicious, but I am stuck now with the need to bake again, in order to use up the other quart of it.

So, if you are brave enough to try this recipe, I would suggest starting with the batter recipe I've provided, and then search online or in trusted cookbooks for a vanilla cream, or even a pudding-ish type dessert, to layer on top of the cake (one of the German recipes called for lemon juice and zest in the vanilla layer, if that sounds yummy to you). The final step is to locate a ganache recipe you adore, and spread the chocolate on top of the cake.

P.S. My favorite part of the entire baking fiasco? The tart Oregon cherries, which I discovered are delicious! In the grocery store I stared at the can sitting on the shelf for a solid minute before braving the purchase, which rang in at $3.75 for ONE CAN! Ah, the price of paradise...
Posted by Metta at 6:40 PM

Ha ha ha!!! Metta, you made me laugh! First, YOU ARE a good baker. So if you say your not just being humble, then you better at least tell everybody that you're a liar! And now that you've made a PKU Dora cake and D.......(sp?), you better say you're an expert. I say you're an expert at least for trying, because I totally would have gone for the Americanized, prepackaged stuff. Way to go!
Happy Inauguration! It was pretty cool, huh.

I'll put it up today. It totally looks good!

wow, that does look really tasty. I want some!