3 surprises named Bad, Good, and Whatever...

1am last night: Just to be thorough, I whipped out my syllabus before going to bed, to check up on the requirements for my 10-page final paper for my Couple's Therapy class, due Wednesday. It was 1am, and oh. my. gosh. According to the revised version of the final paper requirements, the paper was due Tuesday at 5pm. Not Wednesday at 5pm, which had been written on my calendar weeks ago. Because I had it in my head that I had two days left to write it, I had not so much as written the title. Now here I was in the wee hours of the morning, looking at a day of torture ahead of me.

2pm: After a few hours of braindrain I was starving and asked Marcos to make me a hotdog. He mumbled consent from the next room. I had been envisioning a simple hotdog, in a bun, with ketchup and mustard. Half an hour later, my belly juices were starting to get antsy, when Marcos emerged from the kitchen with...

Brazilian hotdogs. Has anyone ever had one? Mashed potatoes, sauteed corn and onions, and a perfectly cooked dog. Oh yes, I could have kissed him! I hope I did! His kindness was sooo needed. 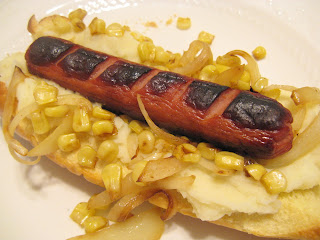 5pm: So, the clock rolled around to deadline, and I was still working on my very last round of edits. It was not a paper that will be passed down through the generations by a long shot, but I had pulled off the ten pages and fulfilled the requirements! Miracle! I emailed in the final paper at about 5:10pm, and wrote a little apology to my professor for the paper being in a few minutes late.

My professor emailed back ten minutes later, rounding off the day with...

Her email read: "Metta - I got it. Its not late. Someone in class pointed out a discrepancy in the dates and I said the later date (tomorrow) would be ok". I couldn't help but laugh at the irony of it all. An entire day of writing and busting my buns to meet a new deadline, when I had been right in the first place.

That stinks! At least you got it done and can relax today!