And we are back to our September European adventure...

There was only one stretch of our European journey where our Eurail passes didn't perform how we were expecting. We had been planning for months to take an overnight train from Paris to Florence, but when we arrived at the train station in Paris a few days before our planned departure date, they informed us that the overnight beds to Florence were totally booked, and, by the way, so was everything else. 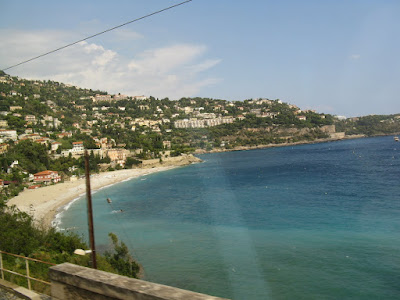 By some stroke of great luck, we managed to book train seats that would take us to Italy over the course of the following day, but the catch was that we would have to switch trains a few times, instead of riding one non-stop ride throughout the night. A few times? We ended up traveling with 8 different trains that day! The unexpected bonus was that our route took us southward, stretch by stretch, through the entire country of France to the Mediterranean coast, and along the coast Southeastward to Italy. For a few hours our train ran shoulder to shoulder with the coastline, and we were able to enjoy scenery like this... 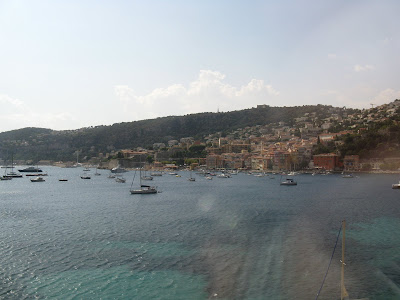 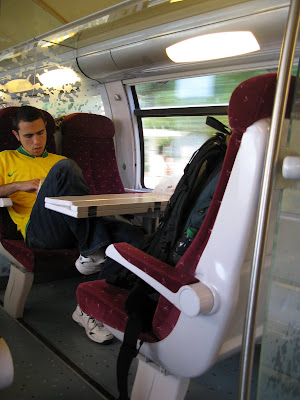 And finally, after train-hopping all day, we pulled into Florence at ten minutes 'til midnight. Our first destination the following morning was De l'Accademia to see Michelangelo's David, and the best buns in rock. Photography was not allowed, but I stationed myself clandestinely behind Marcos and got a few really great flash-free photos of this massive, incredible work of art. Isn't he beautiful? 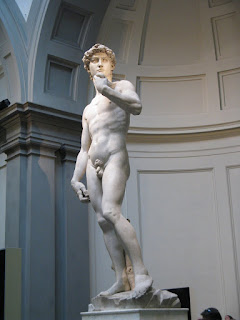 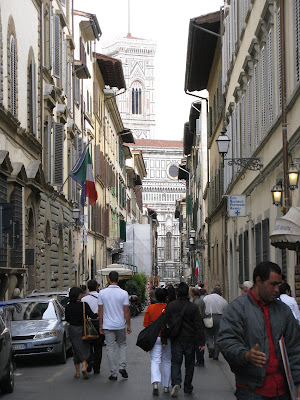 Unlike Munich and Paris, Florence is small; everything you would possibly want to see in the city is within 20 minutes of walking. From visiting David, it was literally just two or three blocks down the narrow street above before we bumped into the famous Florentine Duomo... 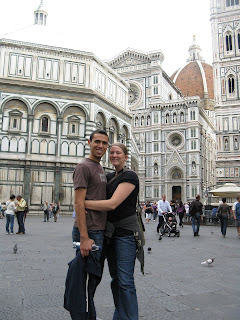 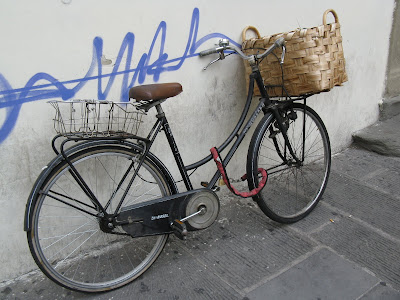 Looking back over our photos of Italy, I have noticed that the things we were least fond of when we were visiting the country have made these photos the most interesting of the entire trip. After spending time in clean, efficient Germany, and breathtaking, romantic, gorgeous Paris, Italy seemed to dim a bit in comparison when we arrived. The country simply does not have the same capital as its more northern counterparts, and the infrastructure, the organization and cleanliness of the country were not comparable.

However, in hindsight, these pictures seem more interesting to me than the others. Despite my being pick pocketed in Florence, the crummy Italian trains we rode, and walking past a man urinating on the wall of a beautiful old building, Italy just seems to have a personality that is hard to beat. 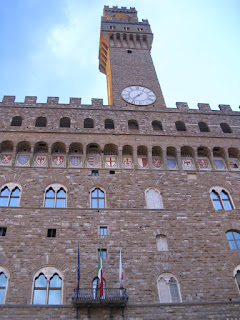 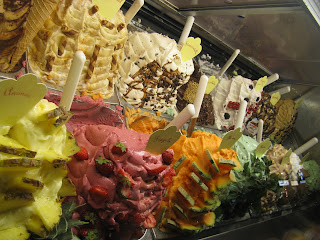 Gelato! We patronized numerous gelaterias in Florence until we settled on our favorite, and on occasion Marcos would order one, and then another, and then another in the same sitting. Our favorite flavors were baccio (chocolate hazelnut) and mango. The best gelaterias mound their gelato into giant hills, and cover the mounds with the fresh fruit, nuts, or chocolates that correspond with the flavor. Mama mia! 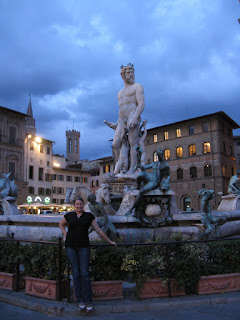 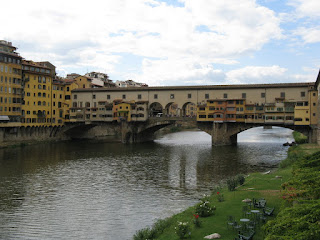 Most famous cities in Europe seem to have a river running through them. In Florence, the Arno river divides the city, and the Ponte Vecchio ("Old Bridge") is its most famous bridge. It was the only bridge left standing after the retreat of Hitler's army in 1944, and although it used to be the center of butchery during the Renaissance era, the Medici family ousted the butchers because of the permeating smell, and it is now a center of jewelery. Below are padlocks connected to a gate near the center of Ponte Vecchio. Lovers write their names on the padlocks, and then throw the key into the river as a symbol of their eternal bond. 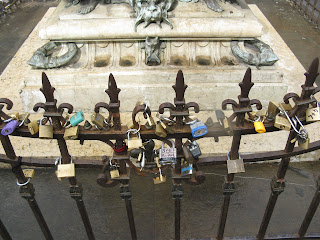 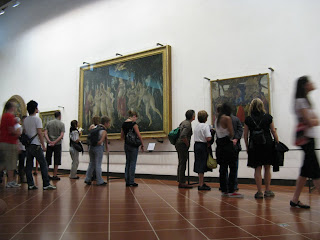 Two photos taken in the Uffizi Gallery, which houses a handsome collection of important Renaissance paintings. Above is Botticelli's Primavera, which is quite beautiful. 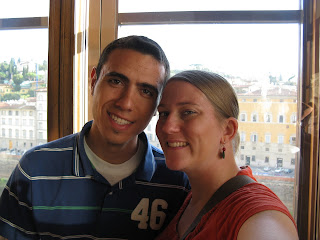 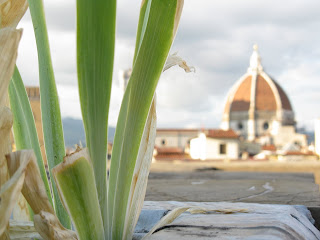 An artsy shot taken from the top of the Uffizi across a few roofs to the Duomo. See how close everything is in Florence? Below, a fine sweets shop window displays marzipan fruits. Marcos bought me a few as a surprise so that I could try them: wonderful, but I prefer to look at their pretty shapes and colors. 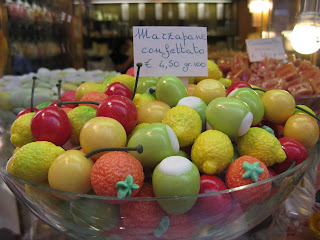 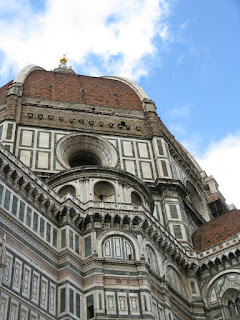 One of the highlights of our trip to Europe was climbing up to the top of Brunelleschi's dome, at the peak of the Duomo in Florence (how did pregnant body do this? No idea...). For most of the kazillion steps upward, we were in a narrow passage way that sandwiched us between the layer of frescoes on the inside of the dome (photo below), and the outer layer of red brick that is visible from everywhere else in the surrounding Tuscan hills. 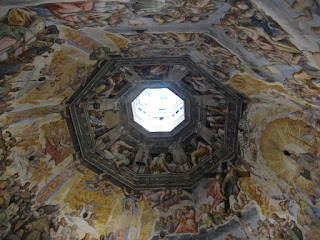 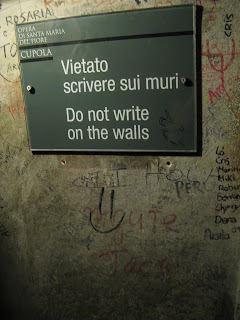 And at the top? Heaven! Florence is nearly completely covered with red brick roofs, which look stunning against the haze of the green Tuscan hills that surround the city. We spent a long time on top of the world, taking pictures, sitting in the sun, and sending paper airplanes with love notes written on them off of the top of the duomo... 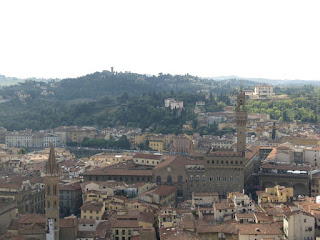 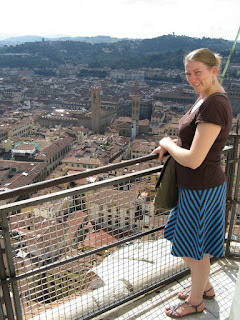 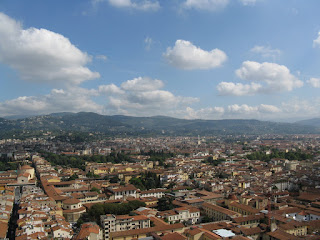 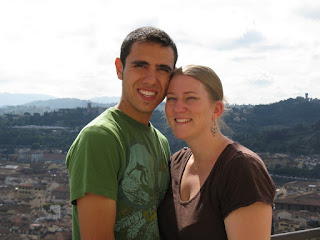 For our final evening in Florence, we walked to the outskirts of town, and climbed a hill to Piazzale Michelangelo, which is even more tightly tucked into the Tuscan hills. It was so beautiful looking out over the city... 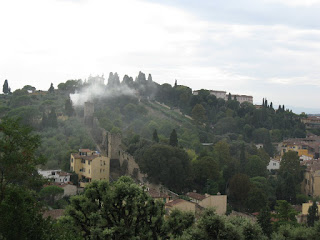 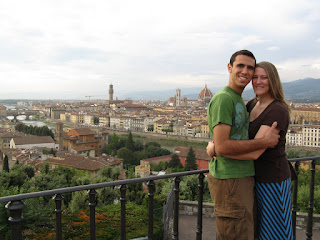 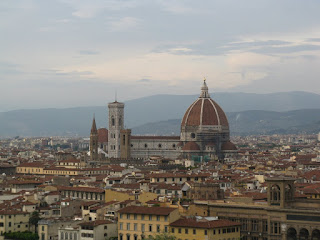 ...and ending our visit to Florence with this view.

But we couldn't leave Florence without a bang. After enjoying the views, we wanted to spend our last night in Florence at a fancier restaurant enjoying a last, great quality pizza, and so we found a nice place in a secluded street on the outskirts of the city.

Soon after we arrived, I left our table to find the restroom, and was surprised to see a camera-looking fixture in the upper corner of the ladies room. I tried not to imagine that the waiters were in the kitchen, watching me. After a minute of nervously doing my business, the lights in the restroom went out, and I found myself in complete darkness. Part of me was fearful, and part of me was relieved that the waiters on the other side of the camera wouldn't be able to watch me any longer. I fumbled at the wall to find the light switch, and pulled the closest thing to my hand: a long cord hanging from the ceiling.

As soon as I pulled the cord, a deafening sound broke the silence of my darkness, and I realized frantically that I had set off an alarm throughout the entire restaurant. On the other side of the door, I could barely make out the voice of our waiter yelling in broken English, "Push ze white botton! Push ze white botton!". In the darkness, fully exposed and with an alarm going off in my ears, I hit every button in that bathroom until I finally found the one that disarmed the alarm. The restaurant felt huge as I made my way back to our table with everyone staring at me with very amused looks on their faces.

A few minutes later Marcos left to use the restroom, and when he returned he whispered to me, "I used the ladies room just to check it out, and that wasn't a camera in the corner, that was a motion sensor. The lights are on a timer, and if they go out, you can wave your arm and turn them back on again".

I would totally pay to get to Italy just to eat the gelato and then come home. Soooo jealous..

Remember, If it gets dark, just wave your arms...

I heart Italia! Part of my heart is still there actually.
Kalani and I did all this in Florence together to. But with our first baby on the oustide. Leina was 4 months old.

I didn't know that you guys went to Italy! Nice. So, are Florence, Paris and Munich all pretty small like you said? I was picturing those cities like Tokyo...