Last night Marcos and I enjoyed the fun of participating in our neighboring ward's November Relief Society activity. Our friend Frank was lined up to demonstrate to the ladies how to debone and stuff a turkey breast, and Marcos did what he usually does: he volunteered to help. 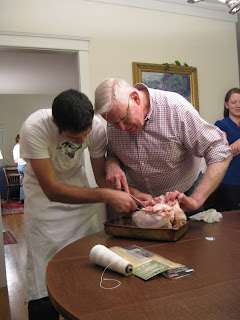 After showing the unknowing females in attendance an old school Saturday Night Live skit of Dan Ackroyd playing Julia Child (yeah, the one where "she" debones a chicken, and cuts her finger, which gushes blood all over her food and workspace until she passes out - the boys felt this was an appropriate segue into their demonstration...), they showed us how to work the magic.

At the grocery store, Frank had purchased two sets of turkey breasts, which come with the bones lining the meat at the ribcage on the inside, and skin covering the outside. Starting with the breast side up, they flipped it over and basically cut the meat away from the bone carefully, so that the ribcage came out of the center and the breast meat fell connected at the middle into a large rectangular layout of meat, covered on the bottom with skin. 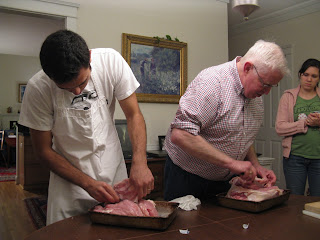 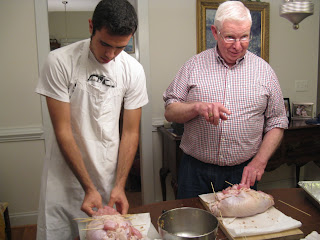 Then came the fun part. Once the bone was removed from the bird and the breasts were flattened out, Frank showed us how to mix up a stuffing, and lay a thick line of it down the center of the meat (where the turkey's cleavage would be, if that is helpful). When the stuffing was patted down into the middle of the bird, the breasts were folded up on both sides, and skewers were used to "staple" the sutures together. They made sure that the skewers were stuck through the skin of the bird, so that the meat wouldn't tear... 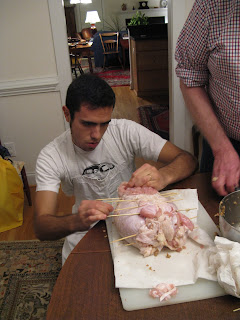 The final step was to "sew up" the gap where the stuffing was... well, stuffed... Using a strong string doubled up, they laced up the bird like a shoe, starting at one end, and winding the string around the skewers, and then crossing them and pulling tight so that the stuffing was well wrapped in the meat. Once the string was tied off, the skewer ends were trimmed, the stuffed bird was flipped over, and placed in the pan ready to bake! 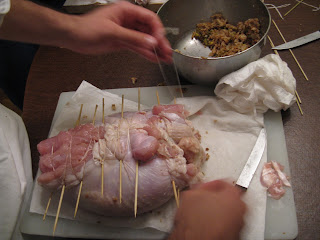 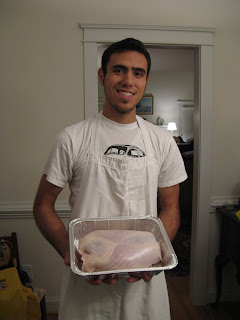 Thank you Frank for showing us an affordable way to prepare a large meal of turkey and stuffing! If the smells wafting from the oven right now are any indication of how it will taste, we are in for a real treat tonight!
Posted by Metta at 2:42 PM