It's getting hot in here...

I've been thinking about something lately that is really bothering me. 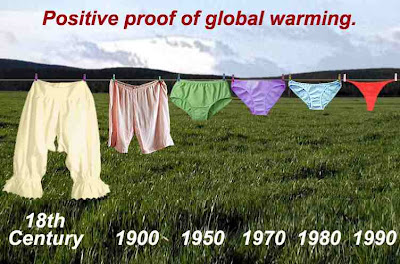 I really wish this had never become a political issue (I suppose I feel that way about a lot of topics), because it usually means that about 50% of Americans choose to be for it, and 50% against it, completely regardless of the evidence. Don't we just want to know the truth about what is going on and do the right thing?

But I guess not. My friends at NPR have been saying lately that there is a recent decline in people caring about global warming. Why? Apparently, because people look outside their homes in the winter and see snow falling and think to themselves that because they are not noticing any change, there is nothing to be worried about.

So, I want to know: who is in charge of sending out the memos? Even though the original drastic predictions of global warming may have been, well... drastic, there is ample evidence that things are changing (more than the usual changes the earth goes through in its process of cyclical coolings and heatings), and it looks like things are changing differently than usual because of our influence on the atmosphere. I am about to have a baby, and I would like to be educated about the world I am presenting her with. If this planet is going to be different in 20 or 30 years, I want to know so that I can make a decision about whether or not I'm okay with the direction it is going.

So, am I all for changing the country's sources of power and energy and immediately jumping on that band wagon? Honestly, I'm not there yet; I lack information, and I have a lot to learn before I can make a judgment about the best way to go about things (and much smarter people than me are still trying to figure it out). But I do want to know who in the scientific community raised their hand and volunteered to communicate general findings about what is going on at the poles and how that will effect us much closer to home in two or three decades. I want to know, because judging by the general disagreement among American consumers, I think that those volunteers are...

An interesting and recent article from the New York Times
A very thought-provoking article from the L.A. Times
Results of a survey from the scientific field in a CNN article
Posted by Metta at 8:54 PM

PLEASE PLEASE PLEASE... promise me that you will NEVER bring this subject up in a conversation with Dwight when I am around!!! Specially if you're going to quote your NPR friends and the NY/LA times.
THANKS!

Nothing I have read, and I try to stay updated on this topic, has suggested that scientist's dire predictions have gotten any less dire. In fact, if anything, the opposite. I am also frustrated angered, confused by the many people who think the whole thing is made up. Although I don't pretend to understand the whole thing, to doubt the life work of a overwhelming majority of people who have dedicated their life to this study seems to me very proud, in the worst biblical sense of the word. I used to not be very partisan, but as the republican party has drifted further and further from reality, it seems like there isn't much of a choice. Basically, we're all in car being driven towards a cliff, and the people driving think the cliff is a hoax. Even if there were only a small chance it would happen, the consequences are so severe, that it would still be worth doing something about. Sorry that isn't very reassuring, but I really have no idea what to think. Right now the situation in congress is as good as it can ever be expected and the energy bill is so much less than we need and even then it may not even pass. And it certainly looks like it won't happen before December, so our chances of reaching a global agreement in Copenhagen are pretty slim. I hope something will happen, but I'm not holding my breath.

Hi Metta. This topic is always on the agenda in my geography classes. People on the global warming bandwagon often don't realise that the earth has gone through similar cycles since its creation. Global warming is a natural process. I agree that human influence speeds it up - but this will only speed up the inevitable in my opinion. I'm not saying that I don't care about it - I do greatly. I just think we need to be concerned about educating people to care for what we have, and to instill in our children a respect for their earth and for each other.
The world will never go green, because there is not enough money in it! Coal is the highest export from Australia. If we turned to green energy approx 30% of our population would be affected - loss of jobs etc. Of could there would be new jobs - but not to the same extent, and of course the money would be gone as you cant really export solar and wind energy.
Wow - looks like I've got on the bandwagon too. I never usually get into this type of stuff, but I thought you might like to hear what someone on the other side of the globe thinks about the issue.
Much love to you
xxx