"Yeah, thanks for that Christmas recipe... that came a few weeks too late"

Whenever my inner domestic Goddess needs to give a roar and express herself, I generally have an undeniable urge to take photos of whatever I'm doing. When I was young I was rather tom-boyish, and rejected most typically feminine things, and so I'm still working out my identity as a wife and figuring out how much of that role needs to be feminine, if any. Part of that "figuring out" has become my love of photographing typically feminine things that I do, just to remind myself that I was there.

In Provo a few days ago Lindsay and I put on some old school Christmas music and made Cranberry Wassail concentrate, and jarred the liquid as gifts for her neighbors. Yes jars, like in the olden days. We didn't hermetically seal them or anything, but there was a certain thrill that came from spinning on the lids of those Ball jars, and feeling very in-touch with past generations of canning-women (I made that part up... my paternal grandmother was actually a Women Airforce Service Pilot of WWII, so my connection to Rosie the Riveter is actually a deep genetic thing).

But enough of my genealogy. Here is the recipe for Christmas Cranberry Wassail, which was handed down to Lindsay by her friend Tia. Hooray for tried-and-true recipes! This one is a winner. 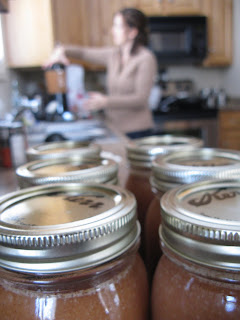 POUR INTO CANNING JARS. Each blender full of the concentrate perfectly fills four pint-sized jars, which usually come in packs of ten or twelve jars. 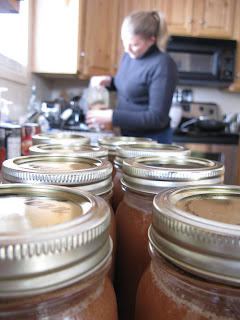 ENJOY! It's a simple recipe and such a nice addition to a cold winter. Lindsay gave out the jars with the recipe for the concentrate as well as the directions for how to use it. "To serve: fill a mug with a quarter cup concentrate of wassail mixture and fill the remainder of the mug with hot water". From the jar that she gifted our family, we were able to drink about five or six mugs-full of the delicious goodness... 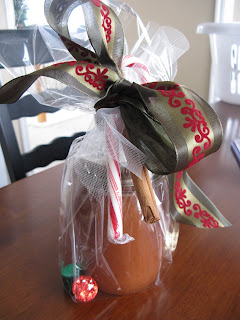 That sounds delicious! and look at how cute and crafty you are :]

yum. I've never even heard of this but it sounds super good. I'll have to try and make some.