A bite out of the Big Apple!

Having a delightful camera is a mixed blessing. Last year, as part of our Thanksgiving road trip up to dad's house, we spent the Saturday after Thanksgiving in New York City. Because our camera was only mediocre, we took a few awesome shots of the city, a whole slew of rather unimpressive ones, and then moved on with life.

However, this year we were a little more tech savvy. For Marcos' brother's wedding in July we researched and bought a camera that we love (Canon PowerShot A720 IS) , and so this year's trip to New York City yielded some rather cool pictures. Not so cool that this blog actually merits 24 photos, but I really couldn't whittle it down any further... so here you go.

Please, get comfortable. You may need a mug of hot apple cider or some cookies to get you through this one! 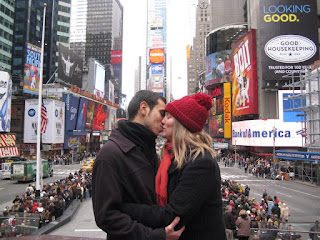 M&M smooching at Time's Square. The two lines on ground level were people waiting for a Broadway box office to open! The theater district is only one block over... 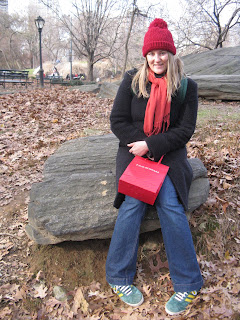 Last year Central Park with all of its autumnal glory was distinctly more bright and beautiful than this year (an early cold spell caused all of the leaves to drop prematurely), but that didn't put too much of a damper on our stroll through the park. 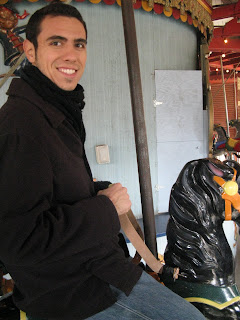 Yes! The carousel in Central Park! We were planning to go ice-skating, but after looking at the price of nearly $60 for both of us, suddenly the $2 carousel looked really fun.... (stay tuned for a video we made on the carousel... future blog entry). 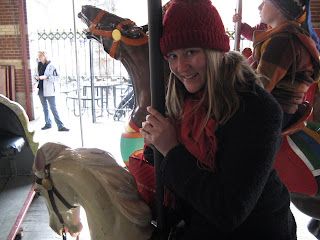 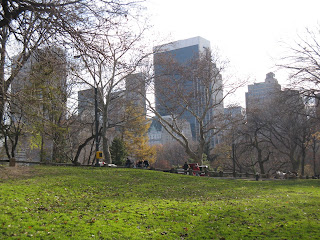 When we arrived in the city on that Saturday, the weather was rather drab, but by mid-day the sun came out and I fell in love with that grass and the carriages in the background. 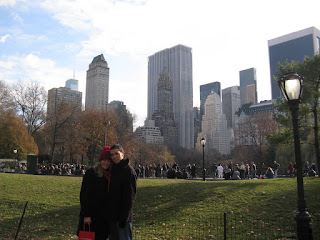 One of the by-far most marvelous things about Central Park is that it feels like a little haven of slow-movers, families, and happy people strolling, yet looming over the park is the New York City skyline with it's massive greyness and importance and fast pace. I rather love the juxtaposition! 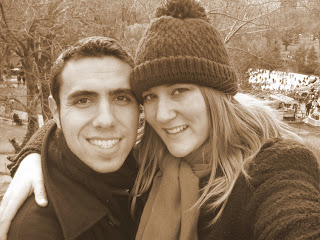 Our favorite together-picture of the day. Notice the miniature ice-skaters in the background... 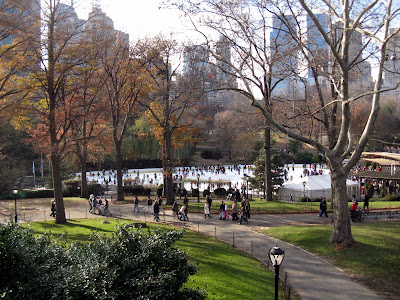 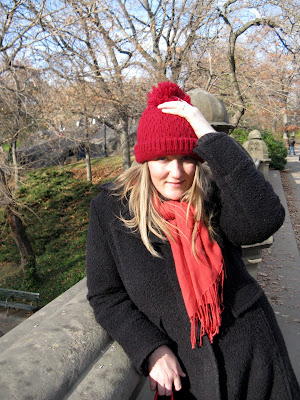 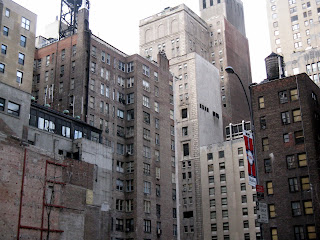 So, we've moved on past the park now. This picture makes me happy, because I love all of the patterns and textures of the buildings all piled on top of each other. Want to play I Spy? Click on the image to enlarge the picture, and see if you can find a wreath in one of the windows! 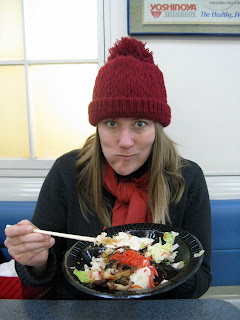 Late lunch at YOSHINOYA!!! Marcos and I thought that we had died and passed into a place much better than earth... We ate at this restaurant often when we were serving a mission in Japan, and although apparently there are also restaurants in California, we had no idea that Yoshinoya had migrated to the US. Here I am displaying my lunch of teriyaki chicken, Japanese white rice, and "beni-shouga" (red pickled ginger). When we sat down to eat, we were slightly exhausted, and there could not have been a happier sight than those rice bowls... 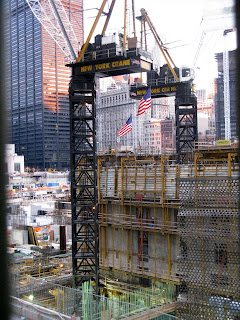 After lunch we hopped on the subway to Downtown, and visited Ground Zero. People from all countries were there to pay tribute to those who died on 9/11, and it was an impressive crowd considering the fact that there is little to see besides a large construction site. Here's Marcos. (I could tell he was having a hard time deciding whether or not it was appropriate to smile at such a place...). 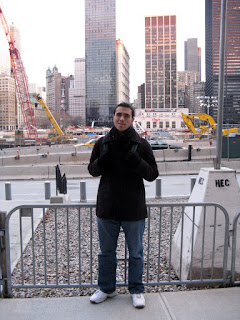 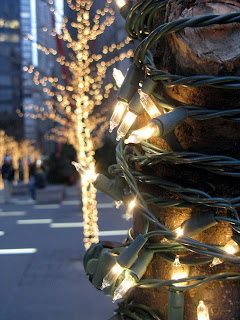 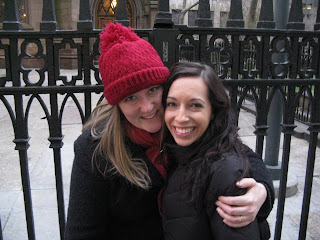 Kimmy Allred, who was one of my mission companions in Tokyo! She's currently at NYU pursuing her Masters in Social Work, and she met us downtown for a very nice tour of the South end of the island. She took us to Wall Street... 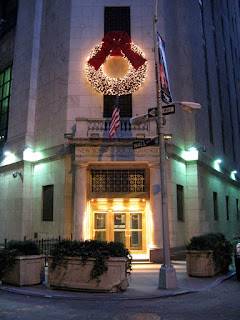 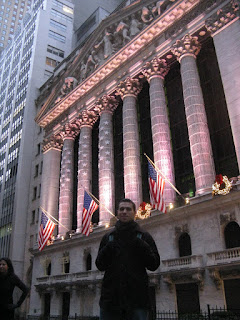 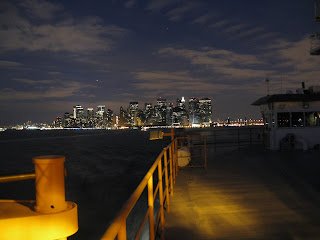 ...and the Staten Island Ferry. What a thrill to see the NYC skyline at dusk from the ferry! We were amazed that any of these pictures came out clear enough to enjoy, because of the movement of the boat. 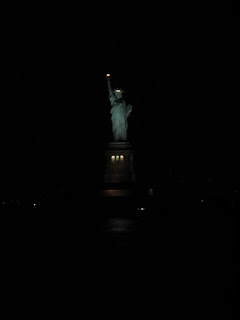 Interestingly, in Tokyo, on two separate occassions in two completely separate towns, I was told by Japanese adults that I look like the Statue of Liberty. I am still not sure if that is a compliment or not, considering that I have no idea what she looks like. I assume that if I were walking down the street and passed her, the green tinge, robe and torch would be a dead give-away, but our education sadly lacks images of the face of the symbol of freedom. 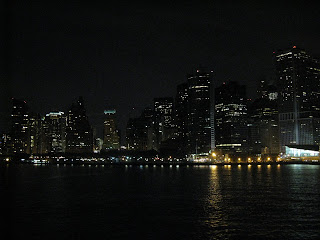 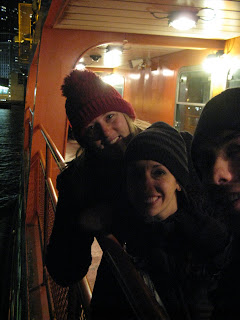 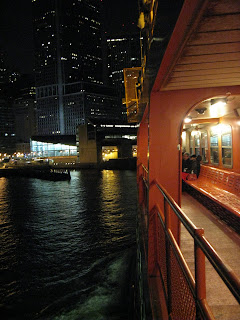 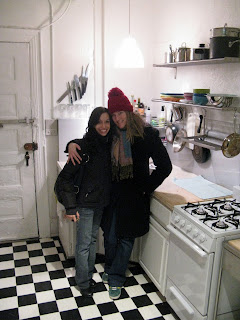 Kimmy lives in Little Italy on the main drag above Bella Ristorante. Just to demonstrate how far $900 rent goes in NYC, she had us come up to her apartment and check out its size. She pays a fairly good price by New York City standards, to share a miniature apartment with a somewhat slanting floor and her own teeny room, and no living room or hang-out space besides the kitchen. It definitely passes the definition of "cute", but she says it gets old having so little space to move and breathe. Hmmm... I wonder how long we would last in a place like New York City. 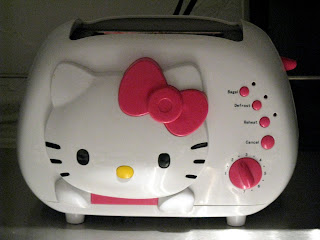 There, you've made it to the end of the entry! As a celebration, I've included this picture of the Hello Kitty toaster in Kimmy's apartment (yes Belle, we took this picture for you!). Not only does it toast bread, but it also stamps Hello Kitty into the side of your slice. What more could one want out of a kitchen appliance?
Posted by Metta at 10:39 PM

Love the pics. You mentioned Sister allred's rent. Was that 900 a month, or a week or what?...I'm a little curious so I can compare it to Aussie standards.
Love ya
xx

I <3 NY!!!
I miss living so close to it. It used to be just a bus ride away :)
ALSO, i found the wreath without even enlarging the pic. I know... I'm pretty awesome.
Seriously though. You guys are so Adorable, and i really enjoyed the pictures. (I drank a pepsi instead or cider :)

Ah man! Your times square pic is WAY cooler than ours! Wish we could have met up with you some how. Looks like you guys had an unforgettable time. (I love the whole eating Thanksgiving dinner in the greenhouse thing, by the way).