The Prietos in NYC

Back tracking a month or two, I'm putting Christmas on pause, and taking you back to Thanksgiving weekend when we went to visit my dad and Emili in New Jersey for the Thanksgiving Holiday.  (I'm a wee bit behind).

The Saturday after Thanksgiving we have historically gone to NYC for the day, as a yearly adventure to the Big Apple.  Since we had skipped a year when Orion was a newborn, we had never actually attempted the trip with two kids, and there were a lot of things that made us nervous about traveling to a cold city with the two littles - would the kids be warm enough, would the double stroller hold up well, would it be worth the cost?  And honestly, I don't think it was until we hit Times Square that we were for sure glad that we had come. 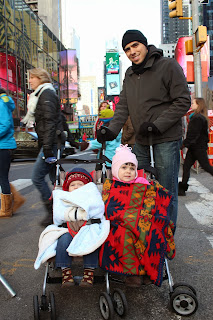 We set off mid-morning from NJ via train, and luckily we had thought through all of the details.  When we arrived at Penn Station, we unpacked the double stroller and bundled the kids as well as we could.  In the photo above, we were still not sure if this was a smart idea. 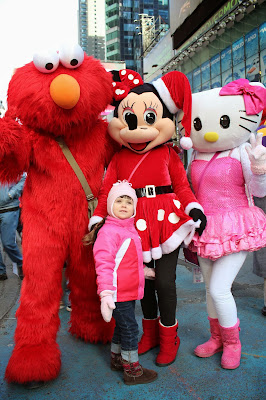 But then we walked up to Times Square and oh, the magic!  Gigi was immediately bombarded by people in oversized costumes wanting money for a photo, and she worked it far beyond the stretch of our $3 in one dollar bills and hugged everyone for free.  Multiple times.  (And a nice Brazilian couple took our photo). 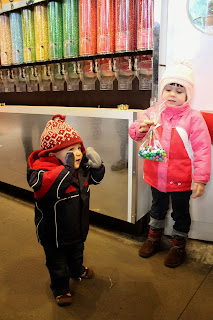 Since it had been two years since we were in NYC we knew that even Gigi wouldn't remember much, and so we planned a simple walking route and stopped anytime we saw something that caught our eye.  Knowing my kids and their sweet tooth, I voted for a stop at the M&M store, and it was the best idea ever.  You know when you stumble upon a completely accidental parenting idea, but it turns out to save the day?  That, my friends, was the M&M store.  Gigi helped me to pick a colorful bag of M&Ms, and the entire day we shamelessly used the M&Ms to get a whole host of good photos.  "Gigi, smile for an M&M!"  Such a morale booster!

From Times Square it was a lunch stop where Gigi shared our M&Ms with the boy at the next table, and then up to meander through Lincoln Center, and pause in front of the Manhattan LDS Temple... 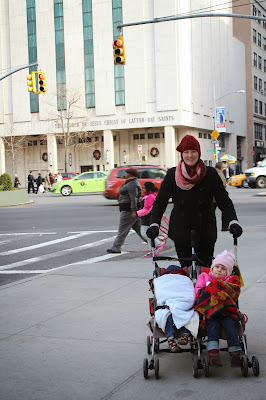 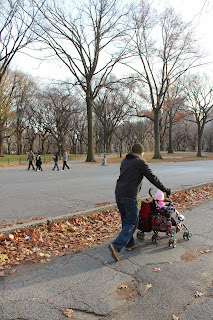 ...and then we made our way over to Central Park for a saunter in the beautiful afternoon.  The park never gets old - always a break from the pace of the city, always enjoyable for kids, always a chance to slow down, hold hands and try to remember what life was like back when we were romantic. 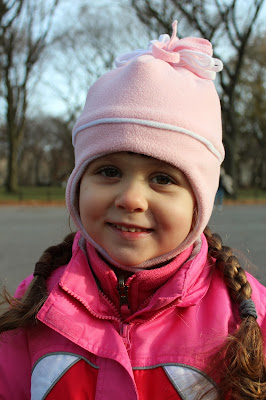 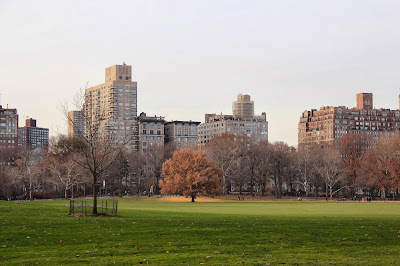 Since Orion was taking a nap in the stroller it was particularly peaceful.  We were surrounded by the kind of scenes that sell you on the crazy idea of wanting to leave the luxuries of suburban life and live in this city, just for a year.  Or maybe two. 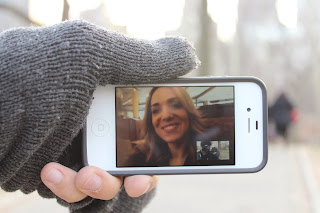 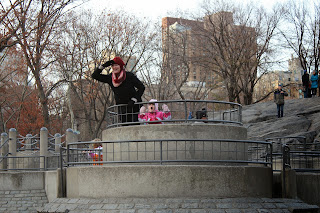 ...and visited Heckscher Playground, and the Central Park skating rink.  This is one of my favorite photos of the day - Gigi and Marcos watching the Zamboni machine clear the ice, with the city in the background. 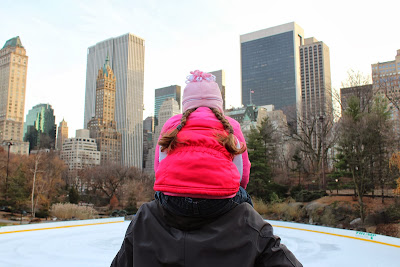 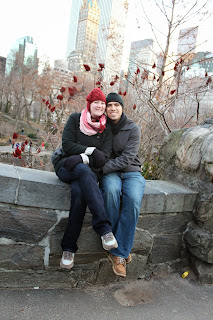 The only regret in our day was trying to maneuver through F.A.O. Schwartz.  The toy store has been an important stop on our NYC rounds every single year we've visited the city, but this time it was too much.  Without a place to leave strollers, we were stuck hauling both Orion and a collapsed double stroller around the store, and with throngs of people and barely space to fully exhale, it was not worth the effort.  Maybe at some time in the future we will come back, when the kids are older and can enjoy it more, and the prices don't feel so far above our pay grade. 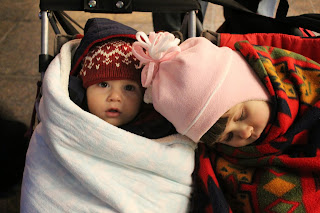 So we packed up again as we lost our last bits of sunlight for the day, and Gigi promptly took a snooze.  We walked down 5th Avenue to our favorite comfort food Japanese restaurant called Katsu Hama on E. 47th, just off of 5th, and there we met with some friends for dinner.  And by friends I mean, MISSION COMPANIONS!  Woohoo!  By some stroke of brilliant good luck, we were all in the same city at the same time - Hitomi and her family live in Brooklyn while her husband works for a big accounting firm in the city, and Desi moved from Austin, TX to work in the city while her boyfriend is at Culinary School.  It was so, so great to see them again, happy and going places in life.  These two were, coincidentally, my final two companions in Japan in a great city called Ushiku, so my memories with them are full of hard work and being so happy, and so exhausted.  I'm not sure if their memories of me are as fond (I might have been a bit of a taskmaster), but they sure do hold a special place in my heart.  There is just something about struggling together for something you believe in, that has the power to make people friends for life.  And the fact that Hitomi and Desi are smart, powerful, serviceable, incredible women doesn't hurt one bit. 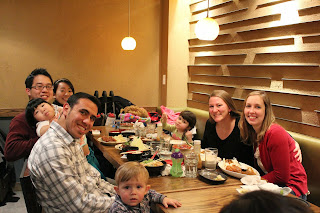 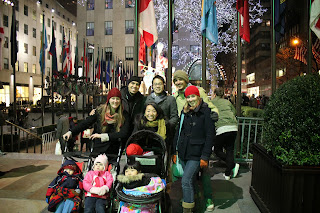 Our final stop of the night was Rockefeller Center with our friends.  If you haven't been to New York at Christmas time, you might want to make that happen.  It is magical.  Especially if you have someone to hug... 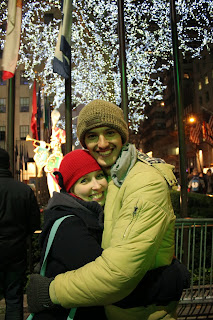 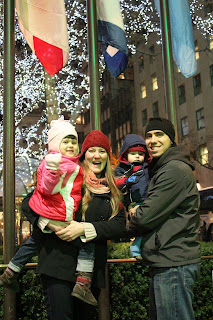 ...or lots of people to hug.  And that, my friends, is NYC 2013.  For all of our worries about the logistics of coming into the City, it was a fairly relaxed, totally enjoyable day with the family.  And these ladies were the cherry on top!  Happy Thanksgiving! 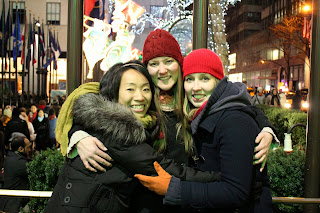