Moving into a new place is a way to recreate a home, to give a fresh spin on your living space, and for me it is a chance to get my creative juices flowing and see what I can make with as little money as possible. Here are a few projects I have finished in the past week or two, that are one by one making our house a home.

#1: The window bench cushion. In our new kitchen, we have a big window and lots of light. I love the window, and I love that there is a built-in bench under it, for sitting and reading, eating breakfast, or talking with the chef. I knew when we moved in that I wanted to have a cushion in the window nook, and after researching the exorbitant prices for a custom-sized cushion, and imagining myself hand-making a lumpy pillow, I did what I sometimes do in times of true desperation: I went to Walmart. In the sale section I bought an ugly outdoor bench cushion that I knew would be too short, and I found a basket with a lid at World Market that fit perfectly in the gap, and that would offer me storage space for Gigi's bibs, reusable grocery bags, water bottles, etc. I used a Hawaiian print sundress my mom bought at a thrift store in Hawaii, and sewed it into a cover to fit the cushion. I am slightly in love with our Hawaiian kitchen corner. 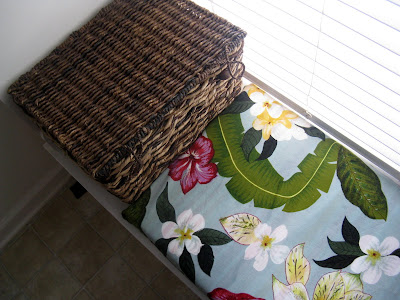 #2: The backsplash frame. For this home I did something I have always wanted to do, but have been too chicken: I bought a print from an etsy shop. It is a Julia Child quote that reads, "People who love to eat are always the best people", and my friend Damaris introduced me to it through her foodie blog. Because the print is 11" by 17", I was left with a slightly awkward selection at the craft store for frames. Luckily, they had a plain black frame, which was what I wanted, and it was only $6, which is all I wanted to pay for it. But problem: I got home and the look of the solid black frame against the taupe and yellow of the print was too harsh and had that icky look of a staged house. How could I change it, I though to myself. And then, an idea from the days of crafting with my friend Abby: decoupage! (Which is a fancy word for "glue some things onto other things"). To soften the frame visually, I ripped up an old newsweek magazine and used just the text portions to mod podge onto the frame in slanted strips. The end product really enhances my cooking. 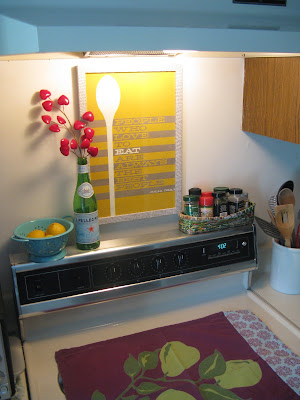 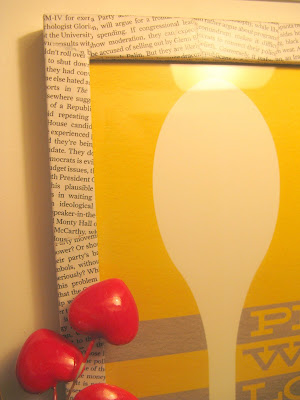 #3: Gigi's pennants. So, I know that they are a trendy way to decorate, but I have always liked pennants (triangle flags), but have never had any good reason to make them, until now. In the room we designated as Gigi's room, there is a high shelf on the wall that I like to call a real "man job": fully functional, never let you down, but boy does it lack something aesthetically. Before we moved in, I thought and I thought and I thought about how to add something that would make it pretty and cover those darned exposed brackets, and during that time we went to a wedding party where the entire ceiling was draped with pennants made from the most exquisite fabrics (after some sleuthing I discovered that the sister of the groom works for a company that prints people's designs onto fabric, so each of the fabrics really was exquisite). I came home from that party, and in two days I had made a stretch of pennants in little girl fabric scraps from my collection, that was the exact length of the shelving around Gigi's walls. With the wooden block letters my sister Lindsay made for Gigi, and the collection of beautiful stuffed animals I inherited from a friend, Gigi's room has become personalized, simple and splashy. Just how I wanted it! 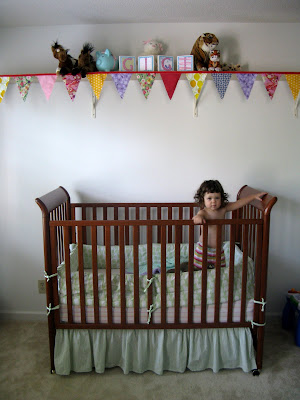 Up next in the "em casa" episodes: the saga of redoing the walls in the bathrooms.

Way to go, Metta, this all looks so wonderful. I can't believe how creative that frame is and how great it looks!

Wow! Great work, Metta! Love the Julia Child quote, love the pennants, and I laughed out loud at your Walmart comment. :P Too funny! Looks like you guys are doing a great job at enjoying your summer! From you I would expect nothing less. :)