We are entering the countdown: on the 10th Gigi made 11 months old, and we are coming up on a birthday party!

But we shouldn't get ahead of ourselves. Let's talk about Gigi at 11 months old. 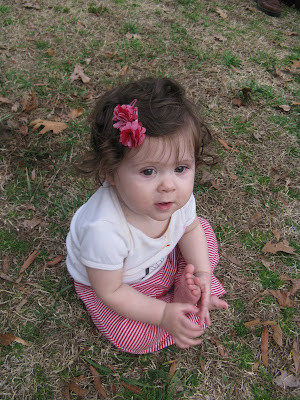 Unlike her tenth month, this eleventh month has been fairly eventful:

This month she got tubes put in her ears by our friend Alisha West, who is an ENT surgeon at the UNC neuroscience hospital. The procedure lasted about 15 minutes, and although Gigi was disoriented and unhappy coming out of general anesthesia, with a snuggle from mommy and some time with the boob, she sacked out in my arms and slept most of the day. This is us in the hospital just before we separated for the operation. Thankfully they whisked her away and said, "see you in a few" instead of letting us engage in a long, drawn out farewell. In general, our experience with this process was speedy and satisfying. 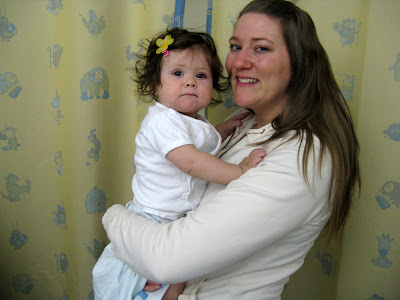 A few days after the procedure, Gigi had a few fussy nights, and we were hoping beyond hope that it wasn't more ear issues. Then one day I noticed that she had a new white ridge of tooth poking up from her gums, right next to her other two teeth. And that explained that one. (Good thing none of us can remember that first year of life - it's just one pain after another!).

But since her operation we feel like we have our happy, curious, sweet little girl back. She is such a social rock star. She waves at people in the grocery store, sometimes she says "hi" in her little voice, she loves to wave and point at people, and she flirts and smiles at strangers. Our favorite new development this month is her musicality: any time we play music and the song is particularly catchy, she rocks back and forth, bops up and down, or claps her hands to the rhythm.

And like her mama, this girl is independent. She plays extremely well by herself, and enjoys her daily ritual of ransacking every corner of our small apartment. Pull all of the books off of the elephant bookcase? Check! Take all of the things out from under the bathroom sink? Check! (Don't worry, we removed the saw and the lighter fluid). Destroy the toy corner? Check! Check! Check!

And then there are some very sweet hours, when we get to peek at our sleeping baby... My friend Lauren told me that watching a baby sleep is like baptism, because no matter the messes and tantrums of the day, when babies sleep their sweetness and innocence wash away any feelings of frustration. 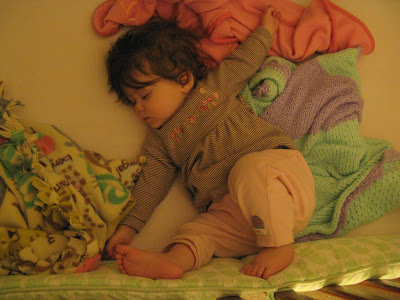 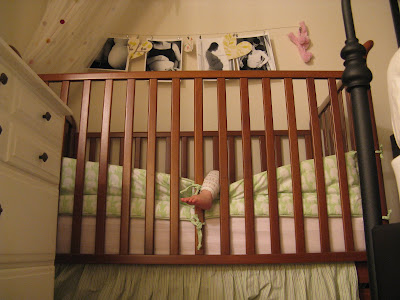 love that thought...sleeping is the parent's baptism!

Glad the tubes went in well. You'll keep on watching that sleeping girl for years to come.

a) how did i only now find your blog!?
b) love the foot dangling out of the crib.