Gigi is eight months old. For the first few months of her life she was such a mellow baby that I always wondered when I would meet the busy, active child I had felt when she was in utero. Now that she is crawling and pulling up to her knees and sometimes even to her feet, our calm baby has blossomed into the busy, active girl I was waiting to meet. She is always on the go. 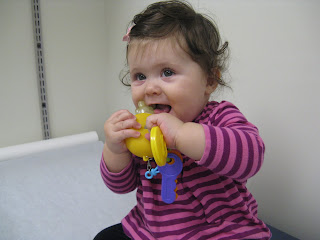 This month took us to the Doctor's office with her first double ear infection - remnants of a little cold. Gigi was not a fan of the amoxicillin, but it seems to have done the job. This month Gigi also cut her first tooth. It is on the bottom in the middle, and it looks like a tiny sharp ridge. She is still our little text book baby, and hits most milestones right at the "average" time. 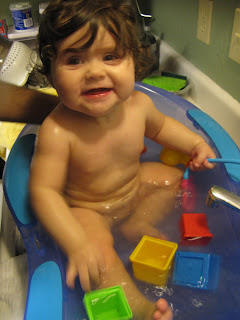 Gigi is extremely curious, not very cautious, and loves to beeline it for whatever is novel in her space so that she can taste it, climb on it, or use it to pull herself up. She still sucks on her two middle fingers and loves to bring soft things (like blankets or an article of clothing) up to her face to snuggle with when she falls asleep. My favorite time is during her night feeding when she slumps limp against my body and falls asleep snuggled into my chest. She is a real snuggle buggy.

An area where I think she excels is in quick learning. She is so inquisitive and learns things so fast. I often wish she would fall asleep and wake up having forgotten a few things (like the location of the computer cords and waste paper baskets, for example), but of course she is up in the morning ready to begin where she left off. 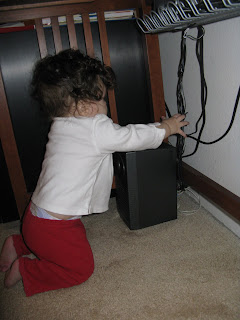 Recently I started reading through a book about using sign language with babies, and I decided to introduce just one sign to begin with: "milk". The Doctor who wrote the book said that after a month or two of using the sign consistently, your baby will spontaneously use it one day, and that will be the most thrilling day of your life. Well, Gigi used "milk" in context within four of five days, no joke (and it was thrilling). She doesn't use it consistently in a way that makes me think she quite gets the concept of exchanging communication, but she really impresses me and I am encouraged to introduce a few more signs.

A tricky area with Gigi has definitely been eating "solids". I had no idea that moving food from the front of your mouth to the back and then swallowing could be so complicated! I know that she won't be breastfeeding until she's 20 years old, but on bad days, I sure feel like we're heading that direction. Some days she eats well and I am encouraged, and other days are very discouraging. In general, she is independent and more apt to be curious with foods when she can pick up the food and put it in her mouth herself, but of course that zings her straight to foods that are chunky and grabbable with little fingers, and... I need her to get good at eating first with things a little less choke-hazardous. Suggestions? I love advice.

And that is Gigi in her 8-month old nutshell. Yummy, yummy, yummy is the best way to describe her.
Posted by Metta at 8:52 PM

I always gave my girls their own spoon when I fed them. It made them feel more in control (I think) and also distracted them a bit so I could get the food in.

I go get the organic brown rice cereal from the health food store and use it to thicken up the fruit and veggie purees I make. It makes it more solid so it doesn't just slip right out.

I hear ya..Livi is taking her sweet time as well. (Actually I would probably fret more about if Emerson weren't her older bro.)

Giving her her own spoon is a good idea. They make baby snack puffs that dissolve really fast - you've probably seen them - which she might like since she can pick them up herself. Liam liked plain puffed brown rice, too (cheaper, healthier, but perhaps more chewy).

http://www.babysafefeeder.com/purchase10.htm
have you seen these little handy things!? they have been really great with other babies I know, you can just pop a piece of apple or even sweet potato or anything in it, and they just naw on it without big chunks breaking off in their wind pipe! I bet you can get them at babies R us or something like that.
aloha!