Thinking back on this Thanksgiving makes me think of traditions and how some of them transition over time. Some traditions we transitioned this year, and some we are already planning to transition next year.

For example, one of our transitioned traditions this year was location. Those of you who are long time friends know that every year, we do thanksgiving in New Jersey with my dad and co., and our Thanksgiving meal is always enjoyed in the green house in dad's backyard. This year, however, we were not even near the green house or dad's backyard. In fact, we were near the beach. 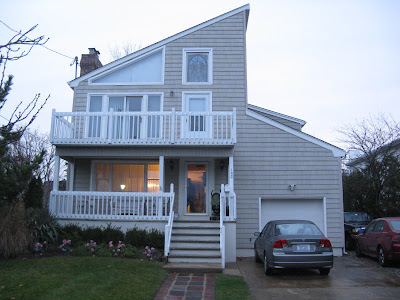 This is the beach house dad and Emili rented one block from the Jersey Shore in a perfect little town named Spring Lake. The house slept 20 people, so the 16 of us that stayed all five nights were very comfortable. In fact, the teenagers of the family played musical beds and rotated each night just for fun. 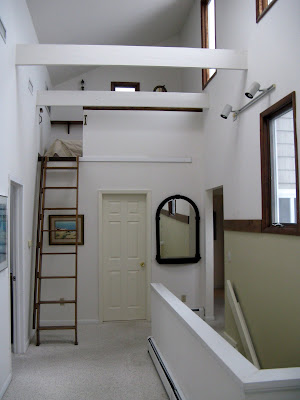 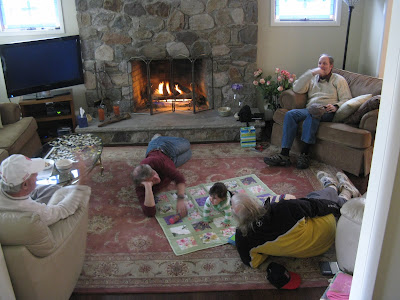 Last year at Thanksgiving I was about 4 months pregnant, so having Gigi around for the festivities this time around was very fun. Being the only person under 13 years of age, she was very popular. My dad, Emili and pretty much Emili's entire family are either psychologists, doctors, veterinarians, or pharmacists, so common comments about her went something like, "Wow, her social development is very advanced" or "that might get lodged in her esophagus".

One of the finest things about our location this year was that with the wide sprawling blocks of Spring Lake, the beautiful lake at night, and the boardwalk on the beach, we had ample destinations for walks or bike rides. Each day, a few groups of family members would spill out of the house bundled up against the winter ocean wind, and go for walks to enjoy each other's company and walk off lunch or dinner. Although the beach was really pretty, my favorite destination was the lake at night. The lake was small enough to walk around in an hour or so, and at its narrow points there were two bridges spanning the lake which were lit up with beautiful lights that reflected off of the water. It was really quite magical. 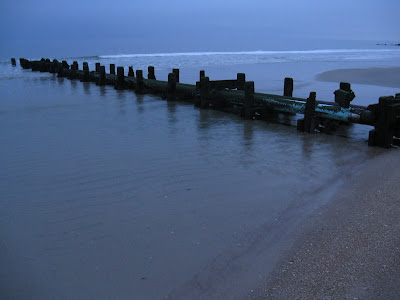 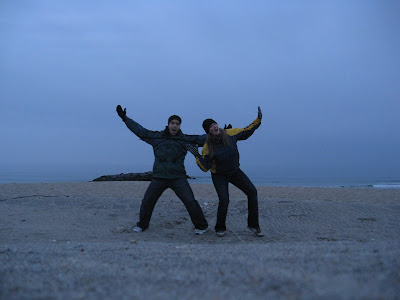 And on to the Thanksgiving feast! Our beach house had a dining room table which perfectly sat the entire group, and I have to admit, being indoors was a bit more comfortable and warm than the green house experience, although the green house is hands down the more charming of the two. One of the traditions that will be transitioning next year? No more roast beast! Yes, we are officially cutting the turkey out of the menu. I guess the seitan and tofurkey that the vegan and vegetarian cooks prepared this year outdid the roast beast, and so it is being ousted. 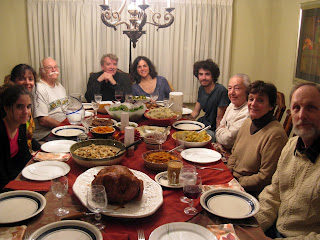 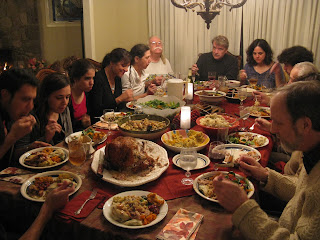 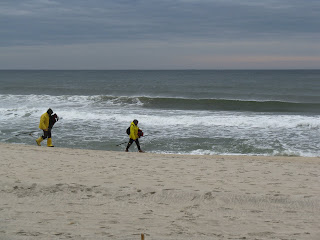 What a beautiful beach! On the day after Thanksgiving, my dad and his friend Mike went on a walk with Marcos and me and we walked the length of the boardwalk. 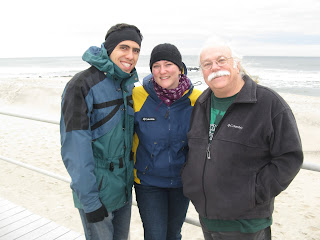 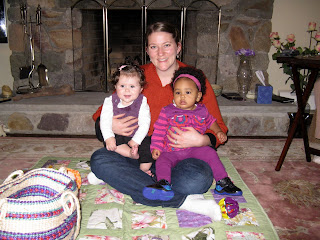 On Friday afternoon my dad and Emili hosted some friends they had invited to join us at the beach house. One friend who came had a little girl named Sophia, and she was very close in age to Gigi. Watching the two of them reminded me how busy Gigi is! So curious, so busy, so much movement!

And then on Saturday, true to tradition, we headed to New York City. This time Marcos drove, instead of us taking the train in, and let me just say I'm glad it was him and not me. He was remarkably calm even in the chaos of people pulling into our lane just inches from our car, while I was busy having heart attacks in the passenger seat. 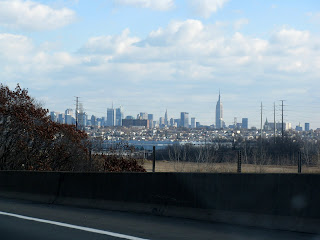 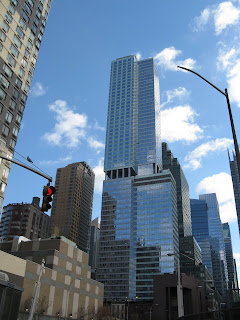 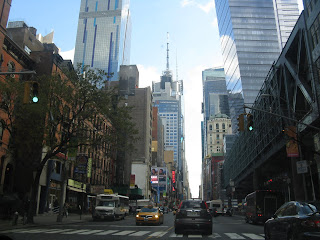 Over on 69th street, just a half a block from the West side of Central Park, we found a parking garage that held our car for 10 hours for $22. It was such a steal for New York City. Below is our little bear bundled up. It was bitterly cold, especially in the wind, so Gigi got to ride in our friend's umbrella stroller in her bear get-up. We were a little nervous about how things would be this year, with a baby in tow. 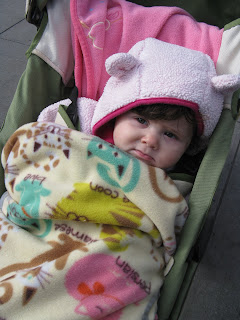 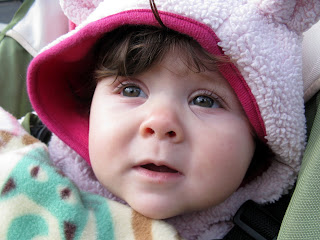 One of the things I really wanted to do this year in New York City was find and EAT famously good food. I mapped out Magnolia Bakery, and we made it! Our favorite was the key lime cheesecake. 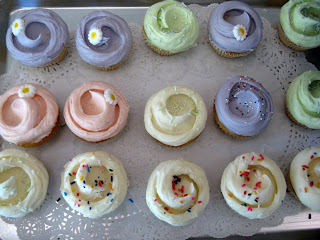 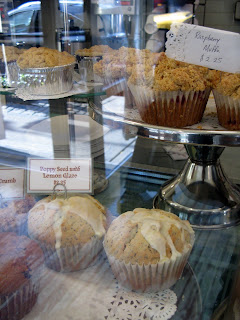 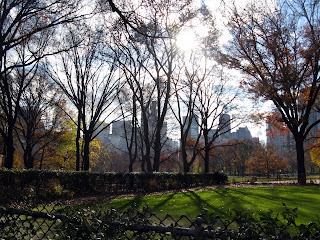 And then {ahhh} Central Park. I would live there, if living in Central Park didn't mean that you were homeless! 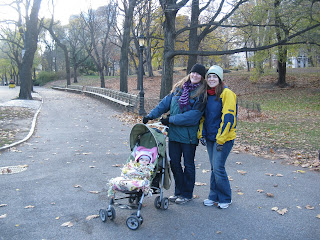 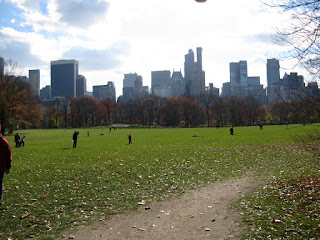 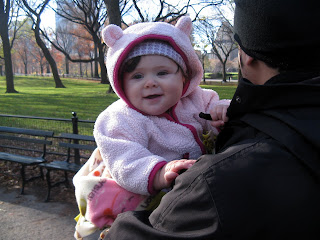 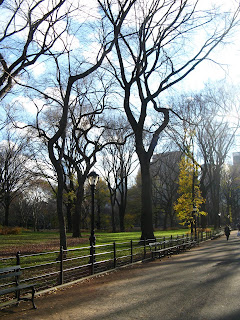 One of Marcos' Daddy Dreams was to take Gigi to the Carousel in Central Park. I think that her reaction was sufficiently satisfying. 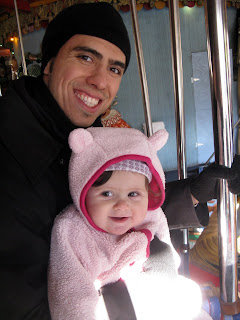 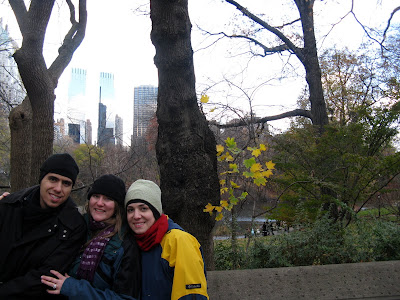 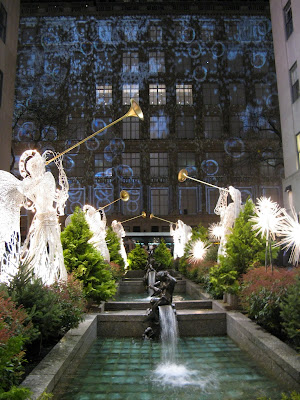 I don't know whose brainchild this was, but Saks Fifth Avenue had an incredibly cool light show projected onto the facade of their building. We were just minding our own business in Rockefeller Center when the show started, and it was frankly pretty amazing. 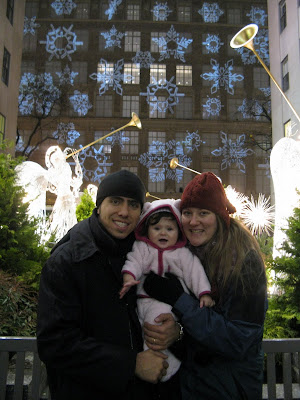 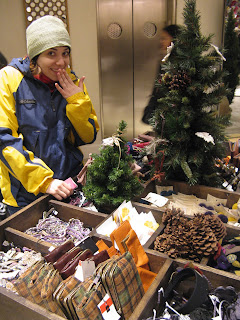 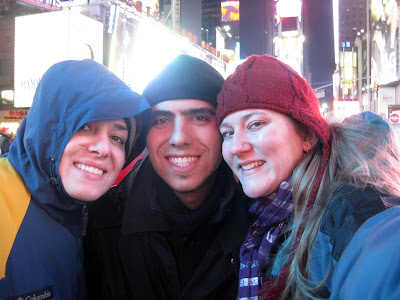 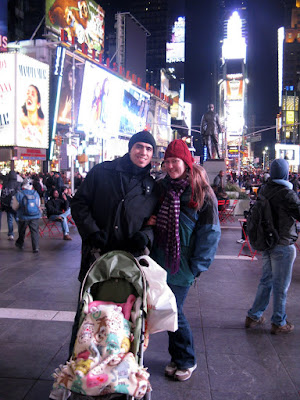 To finish off our evening, we ended at Time's Square, which is as bright as day in the middle of the night! Fortunately Gigi had fallen asleep by that time, and we were able to walk slowly back to the car and say farewell to New York City with a final dose of insane car maneuvering on our way out of the city. And you know, after four years of Thanksgiving hurrahs, we may not be back next year. We've been thinking about having Giovanna as a 20-month old in NYC, and we might opt for a new city or decide to do something entirely new.

Did you try the banana pudding at Magnolia?

What a fantastically cool Thanksgiving! I am very jealous! And I second your statement about Anthropologie.

I LOVE this post!! Metta, you are seriously so fun! I love all the details you included about your family and friends, I love the pictures, I love the sights you shared and of course, I love that little GIGI!

Sadness that Abbie was out of town that weekend! That would of been A DREAM for me to read about!!!

Love the close-up of Gigi in the stroller. That's precious.