Today we went in for Gigi's 6 month check-up appointment with Doctor Goldbach. These appointments are something I look forward to for months. Gigi? Maybe not so much. Each time we go, she gets about four shots: two in each thigh. After doing my research, I'm a bring-on-the-vaccinations type of a mom. I understand that not all parents feel that way, and that's fine.

Before we went to the appointment I told Marcos that I didn't think she would be in the 90th percentile anymore for weight, and she wasn't. She has been slimming down a bit, and by "slim" I mean that she still has cellulite on her buns, but her activity level is starting to thin her out. Thankfully, she is still breastfeeding exclusively on my Häagen-Dazs super premium breastmilk, although sometimes I am concerned that I won't be able to keep up with her much longer. 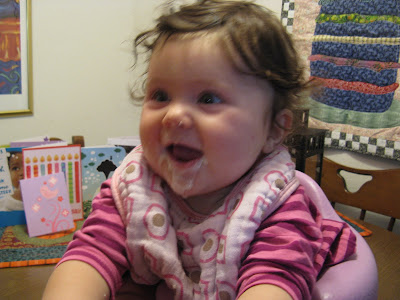 And rice cereal! Six months means that we have started very slowly rolling out the rice cereal. We tried a few weeks ago, and nothing stayed in her mouth, so we gave it a break and are just now starting up again with a once a day evening feeding. After just two or three days, we are quite impressed that by the last feeding, a few spoons full of cereal actually stayed in her mouth. Progress!

Six months also means that our camera is frustrating me more and more. The Canon point and shoot we bought before our last trip to Brazil has served us very well on all of our travels and our colorful life for the past two years, but with an active and moving baby, everything is starting to come out blurred (see above for example). I keep eyeing everyone's D-SLR cameras, but at the rate we're going, we will only be able to afford one by the time she graduates from college.

And by then, she will probably have already learned how to sit still. 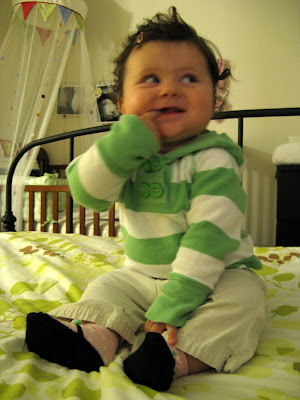 "Active" in the life of Gigi means that at six months she is rolling both ways like a champ, she can sit up on her own very well and play with toys in front of her, and she is starting to experiment with pushing back just slightly onto her knees from a tummy position (in preparation for crawling, which I'm hoping is still a ways off).

Socially, Gigi is right on track. She smiles with her entire body, with her arms flailing and her body rocking back and forth. She thinks it's funny when people make loud kissy noises to her, and Marcos has taught her how to click her tongue, which she does proudly even though it is slow and laborious. She is alert and attentive, and although strangers don't scare her, she will sometimes knit her brows and stare at new people and soak them in before trusting them with her smiles and laughter. I have some amazing videos of her in action that I would love to post, but they are always too big to upload. 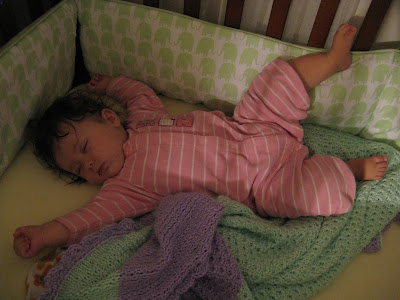 When she sleeps I want to yell, "Let the Wild Rumpus Start!"
She often has her hands in fists and her leg up like Max in the book "Where The Wild Things Are".
Currently my only worry about her, besides what we will eventually have to do to kick the finger sucking habit, is her hair. Her hair! I have already had to cut two tiny budding dreadlocks off of the back of her head where she rolls around and gets it matted up. Ay caramba!

And that is Gigi in a nutshell: a happy baby who eats and sleeps well. Sometimes they just come out that way. We have seen enough not to take any of the credit. We hope that all of our children will have such a lovely disposition, but for now we are just thankful every day that Gigi is ours.
Posted by Metta at 9:11 PM

Tip: I finally had to resort to youtube for my videos, they were always too big to load as well. I found that they have all sorts of security features I didn't know about...With our parents living so far away (and yours too) I really wanted them to see actual videos of the girls. It's worked out pretty well :)