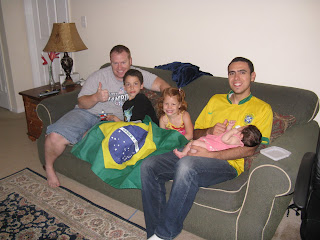 This is the first time I've been married to a Brazilian during the World Cup, and it has added an entirely new element of fun to our summer. We have a few friends with big-screen TVs and DVR, so even when our schedules don't allow us to watch the games live, we can still enjoy them together later the same day. The rules of the World Cup viewings with our friends are 1) if you know the score, don't say it and 2) no answering your phone during the game. 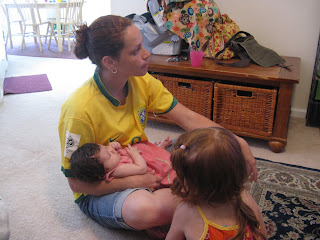 Our friend Aline is from Rio. 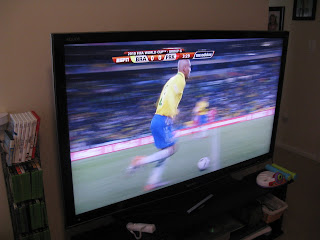 I consider myself a fairly decent fan, but Marcos tops most people I've seen. During one game I made the mistake of asking him to change Giovanna's diaper, and after taking off the old one, he watched the game for a minute or two, yelled a bunch, and then looked down to see that she had peed all over herself. When Donovan scored the final goal in the last USA game, Marcos was so excited that he jumped up off of the couch and threw his hands up, right into the ceiling fan. He didn't even notice until later that he was bleeding. 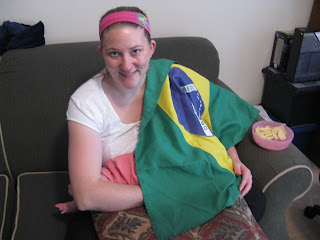 When I forgot to pack a cover for feeding Gigi, the Brazilian flag made a brilliant substitute. 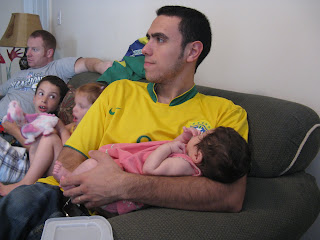 And if we think this has been fun, we will have to start saving now for the 2014 World Cup in Brazil. Anybody want to come with us? Anybody?
Posted by Metta at 11:18 AM