Back in April, something really fun happened - the Primary hosted a family dance for our ward.  For those of you who don't speak the Mormon lingo fluently, the "Primary" is the name of our children's organizations, and "ward" is what we call our congregations.  I am currently our ward Primary President, and so along with my counselors and secretary, our families, and some help from other talented friends, we hosted a really fun afternoon of dancing and games for our ward families and friends. 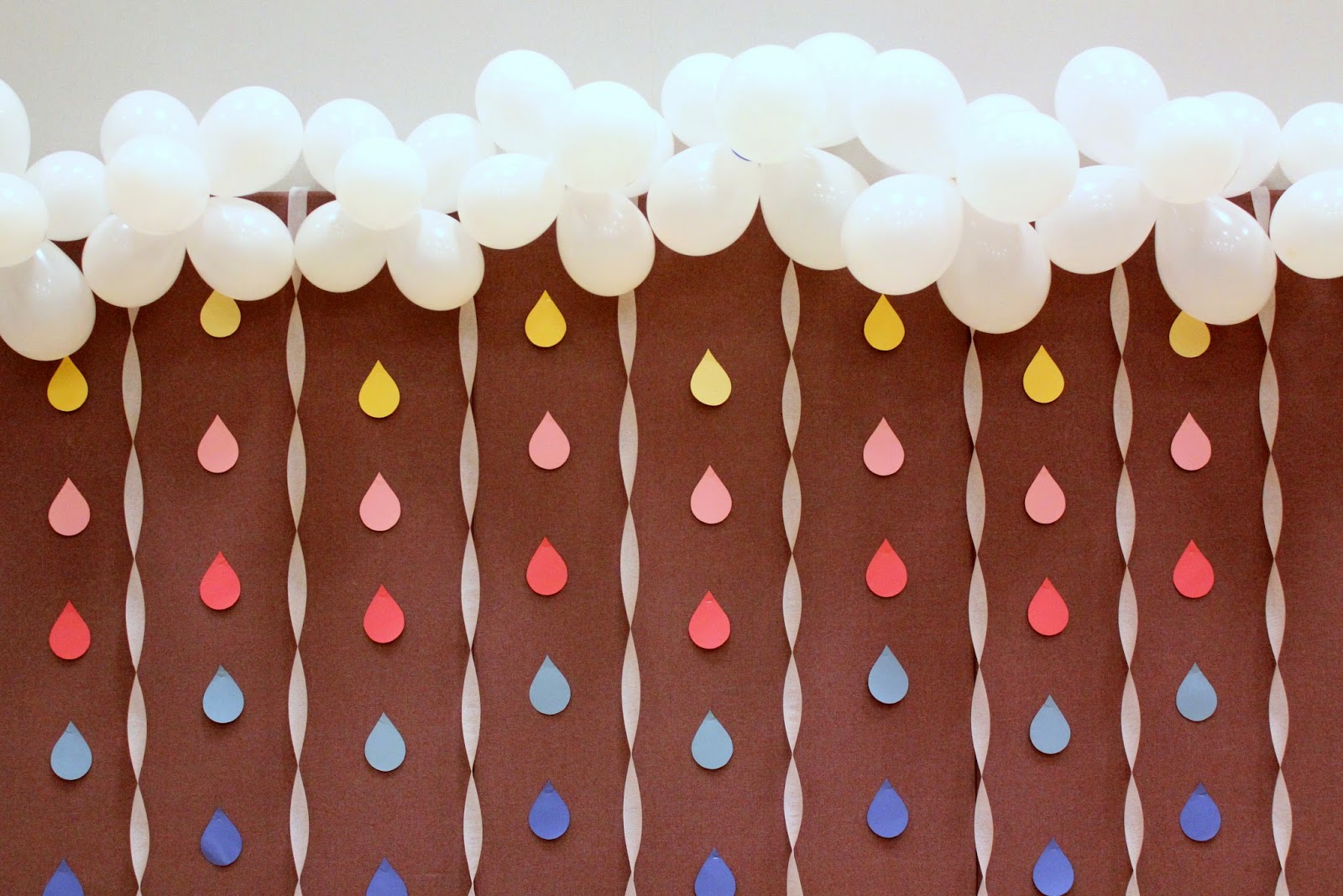 Now, I'm a firm believer in good documentation, detailed notes, sharing success stories, and NOT reinventing the wheel, so if you are also a person who likes to host dance parties or if you are a Mormon who may in the future be asked to plan an event, this post may be your ticket to happiness in the form of my notes for a successful family dance party.  And if you're not any of those things, this post may just be long and wretched and painful.  Consider this a warning.  (And I will not for a second be offended if you skim through the photos and go back to watching cat videos on youtube). 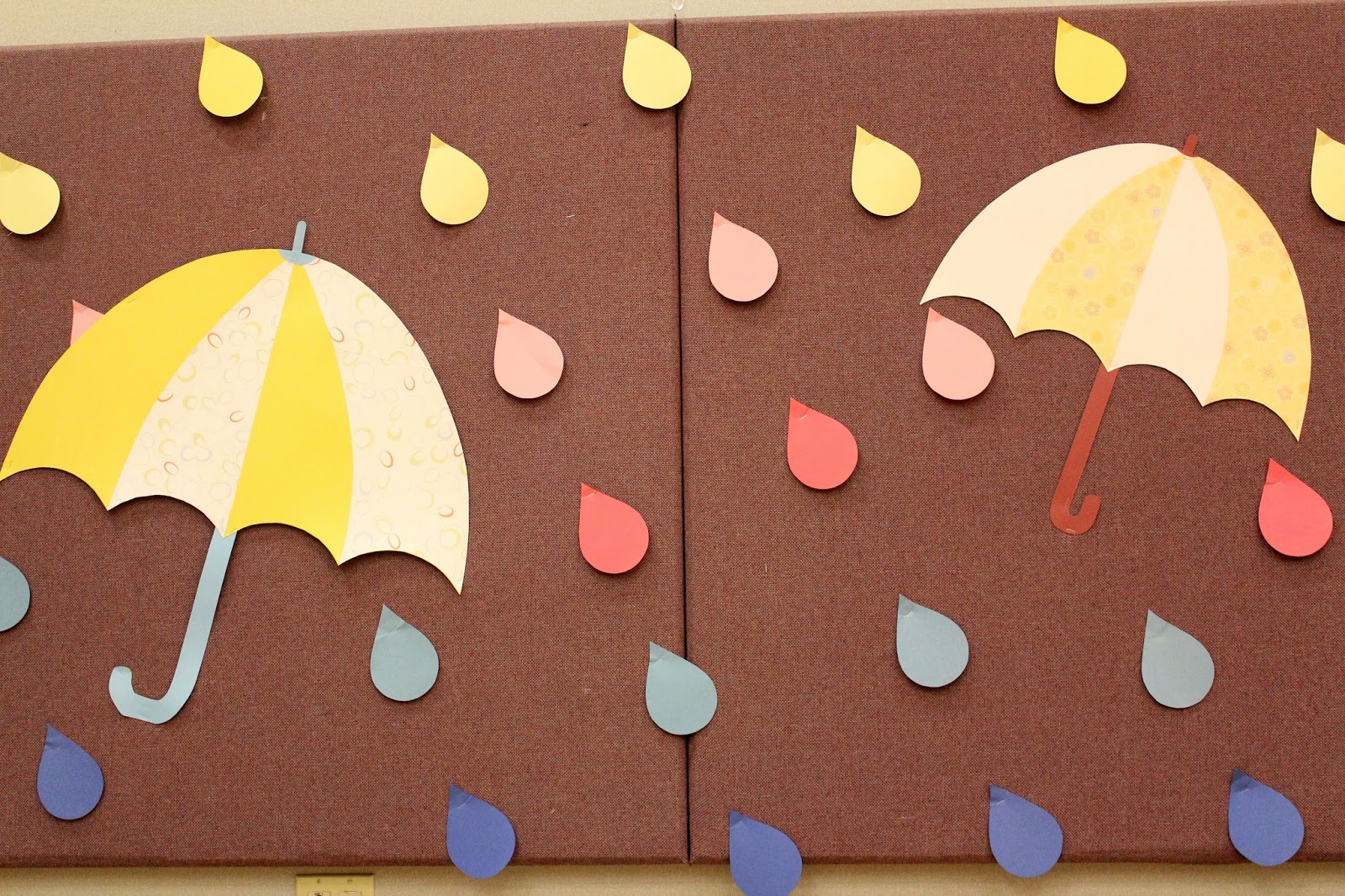 If you are still reading, this was our recipe for a fun family dance party.

Step #1: Set the date, get it on the calendar, determine a theme and recruit someone very talented to help with the decor.  As a Primary presidency we came up with the "Splash into Spring" theme, we thought of general ideas to pull the theme together without going crazy with our budget (umbrellas? galoshes? raindrops? balloons for clouds?) and then we asked our very talented artist friend Guenieve if she would help us as our sort of design guru.  She worked with the supplies we had, bought a few additional things to finish the effect, and it was perfect - simple and quite adorable.  Does your church gym have those mauve panels left over from the 90s up on the walls?  Yeah, ours does too, but with minimal fuss Guenieve transformed those puppies into something hip and happening. 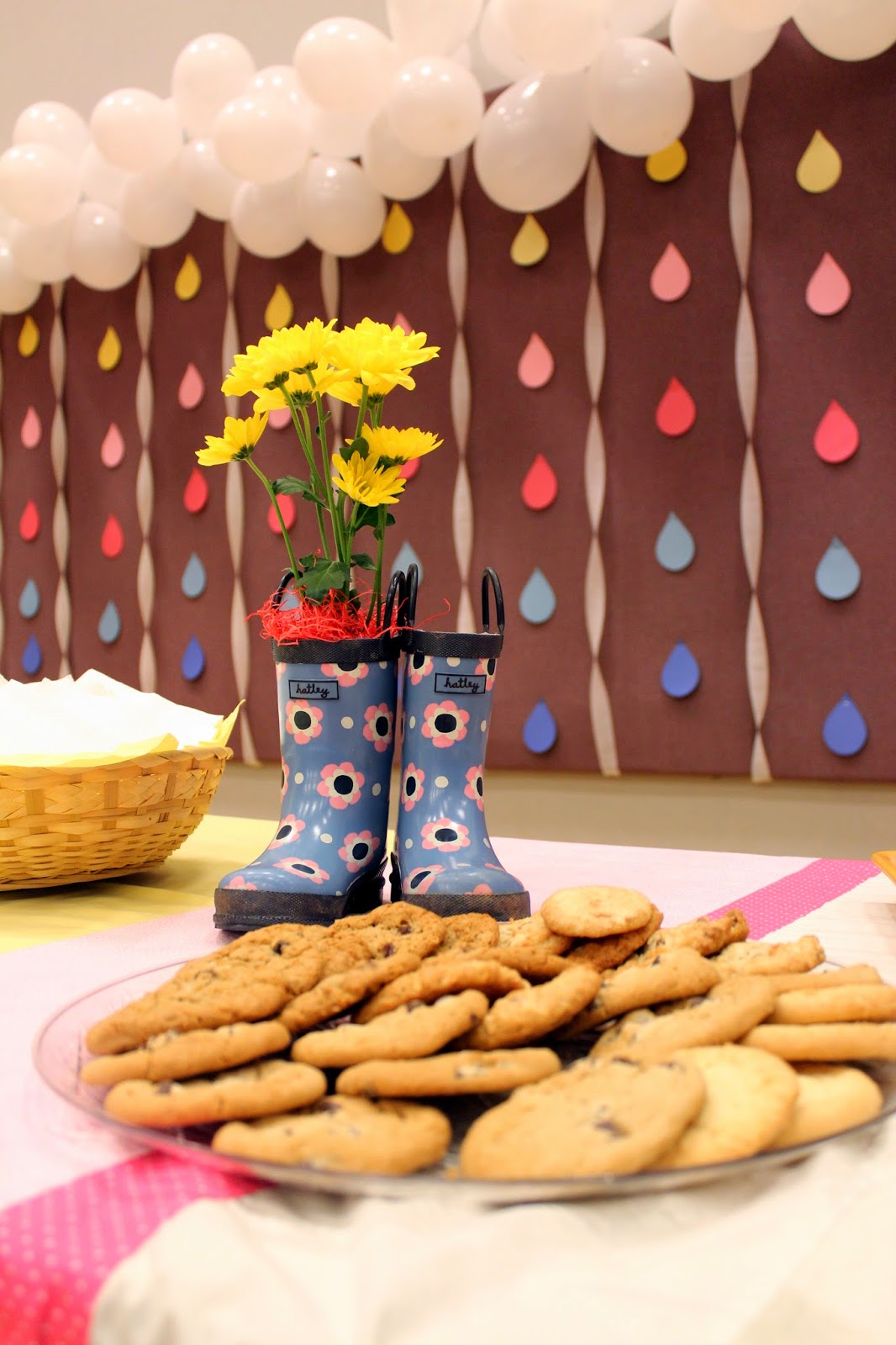 Step #2: Even more powerful than my firm belief in not reinventing the wheel is my belief in the absolute necessity of advertising.  What is the sense in putting energy into an event that is not well advertised and doesn't draw a crowd?  So, I send an initial Save the Date email to our ward listserv four or so weeks in advance of the event, two or three weeks prior to the event I put flyers on the bulletin boards around the church, the week before the dance I put small flyer inserts in each of the Sacrament programs, we talked it up in Primary to the kids for weeks, and two days before the event I sent out a reminder email to our entire ward listserv.  All of the advertising focused on the event being fun for all members of the ward, I advertised that there would be treats and games, and that it would be perfect to invite friends to.  Yes, advertising required a bit of effort and I used some of our budget to make nice flyers at Kinkos, but I looked through our photos after the dance and counted all of the people who showed up for our event, and including children and babies, there were 120 people in attendance, which is pretty great for us.  Good, upbeat advertising is worth every expense. 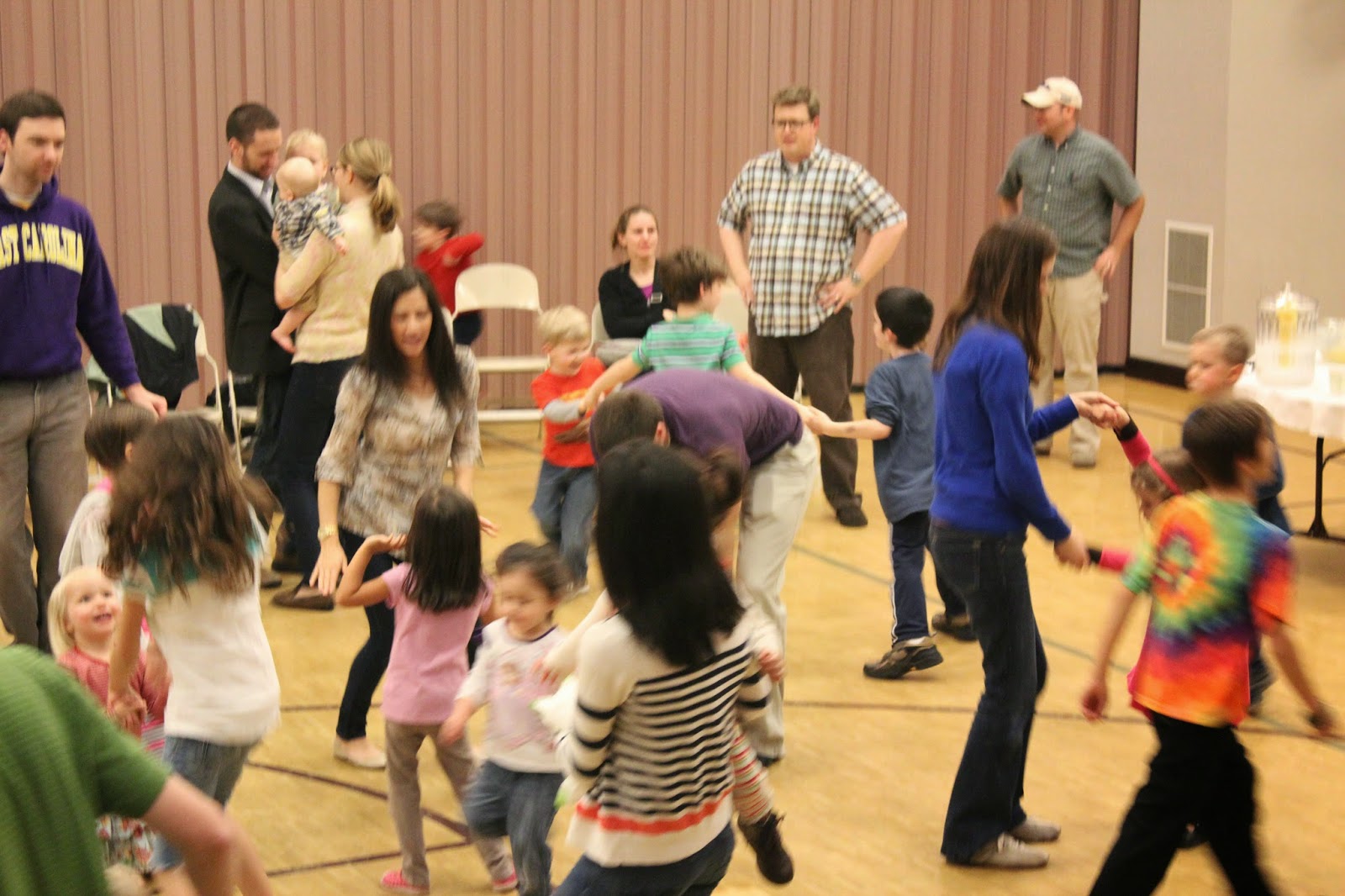 Step #3: So AH!  Now that you've talked it up, and made sure the space is going to look great even with a lean budget, how do you make sure that the dance is actually FUN, and not a big flop?  That's a really good question.  There are just a few elements to consider.

First and foremost, think about who would be a good MC for the dance.  This person's job is not only to welcome everyone and organize an opening and closing prayer, but this person has to inspire excitement at an event that honestly inspires dread in so many people.  I've been around for a few years and have made some friends and I'm pretty sure most of our ward came just because they wanted to support me and my Presidency and this event we had planned.  But afterwards I got the feedback that even though dances can go a few different directions - especially family dances that cater to a wide demographic - ours had been so much fun.  Your MC needs to be someone who will make everyone feel like they just arrived in Disney World, but in a non-obnoxious way.  Your MC will also lead the games, so they should walk through the details in their head and be comfortable with what they need to announce.  They also need to know technical things like how to pause the music and restart it, which is required of some of the games I will list.

Our approach from the beginning was to make sure that the dance was a good combination of "free dance" songs, and "game" songs.  I searched the internet for all dance party games, and pulled out the ones that would work best for our group, and this is what our final music line up looked like:

We started this music at 2:50pm to welcome early birds (the event started at 3pm).

The MC (me) welcomed everyone and we had an opening prayer at 3:05, and then we started our main playlist.

- Happy – Pharrell Williams – 3:53
- The Twist – Chubby Checker – 2:39
- Black or White – Michael Jackson – 3:19
- What Makes you Beautiful – One Direction – 3:18
- Limbo Rock – Chubby Checker – 2:25 (During this song we pulled out broom sticks and did a very fun limbo dance-off)
- Say (hey) I love you - Michael Franti & Spearhead – 3:56 (During this song we played the Bear Hug Game.  At random points in the song I paused the music and yelled out a number, and the dancers had to run and cluster in bear hugs with the number of people that I had called out)
- The Way I am – Ingrid Michaelson – 2:15 (This one I announced as a couples dance, so most of the kids went to get cookies while their parents danced - such a sweet, short song, and not too cheesy)
- Waka Waka – Shakira – 3:23
- Barbara Ann – The Beach Boys – 2:13 (I secretly don't like The Beach Boys music at all, but this number is really upbeat, so we used it as a chance to play our balloon pop game.  I brought out three huge trash bags full of blown-up balloons, and dumped them all over the dance floor.  The kids jumped on them to pop them all, and inside of each was a small paper.  Printed on three of the papers was the word "prize" and the kids who popped those balloons came up to claim a little prize).
- Clean Up Song - Barney - :33 (Um, Marcos' idea.  Hilarious.  The clean up song came on, and the kids picked up all of the balloon bits before we moved on with the party).
- September – Earth, Wind, Fire – 3:35
- Let there be Love – Nat King Cole - 2:47 (I announced this one as a Daddy/Daughter, Mommy/Son dance.  Totally sweet song that is vague enough to be about filial love!)
- Jump in the Line – Harry Belafonte – 3:45
- Celebration – Kool and the Gang – 3:36 (During this song we did the Snowball Dance Game.  I picked a couple to start dancing alone in the middle of the floor, and a little ways into the song I said "snowball!" and they split and pulled two new people onto the floor, then I said "snowball!" again and they all split and grabbed a new partner onto the dance floor.  We repeated the game until the song was over and the floor was covered with dancers).
- YMCA – The Village People – 4:41
- The Way You Look Tonight – Michael Buble 4:38
- Do you Love Me? – The Contours – 2:55

I then thanked everyone for coming and we said a closing prayer, after which we continued with our clean up party playlist!

- Let it Go – Frozen – 2:05 (This is when some real magic happened.  There was a general sense of exhilaration in the air and we were all tired and happy after a fun dance, but instead of fizzling out, it just got better.  As the adults started cleaning up, taking down decorations, sweeping, etc. some of the kids came up and wanted to sing into the microphone along with the songs from Frozen that were playing over the speakers.  So, we had a cute line up of girls and boys who belted it out into that microphone along to our cleaning party).
- Marry You – Bruno Mars – 3:50
- New Soul – Yael Naim – 3:45
- Wagon Wheel – Old Crow Medicine Show – 3:52
- It’s My Party – Leslie Gore – 2:16
- Closing Time – Semisonic – 4:34

And that was our general line-up.  If you do a dance party and want to use this playlist you are more than welcome to it.  If you want to change some songs you are of course very welcome to tailor your playlist to your group, but I have one word of advice: when you are thinking about putting in a new song, play it in your living room and have a few people dance to it right then and there.  Marcos and I have made a few playlists for dances since we've been married, and we've found that there are some great songs that are terrible for a dance party.  You want to find either a good fast-paced ditty that will keep you moving, or a specifically slow song.  The in-between tempo becomes really dull to dance to, unless it is an iconic song like YMCA that everyone knows and has actions for.  You'll notice that our favorite mid-tempo songs fell into the "clean up party" list after the dance was over, because by then the music was mainly for background enjoyment. 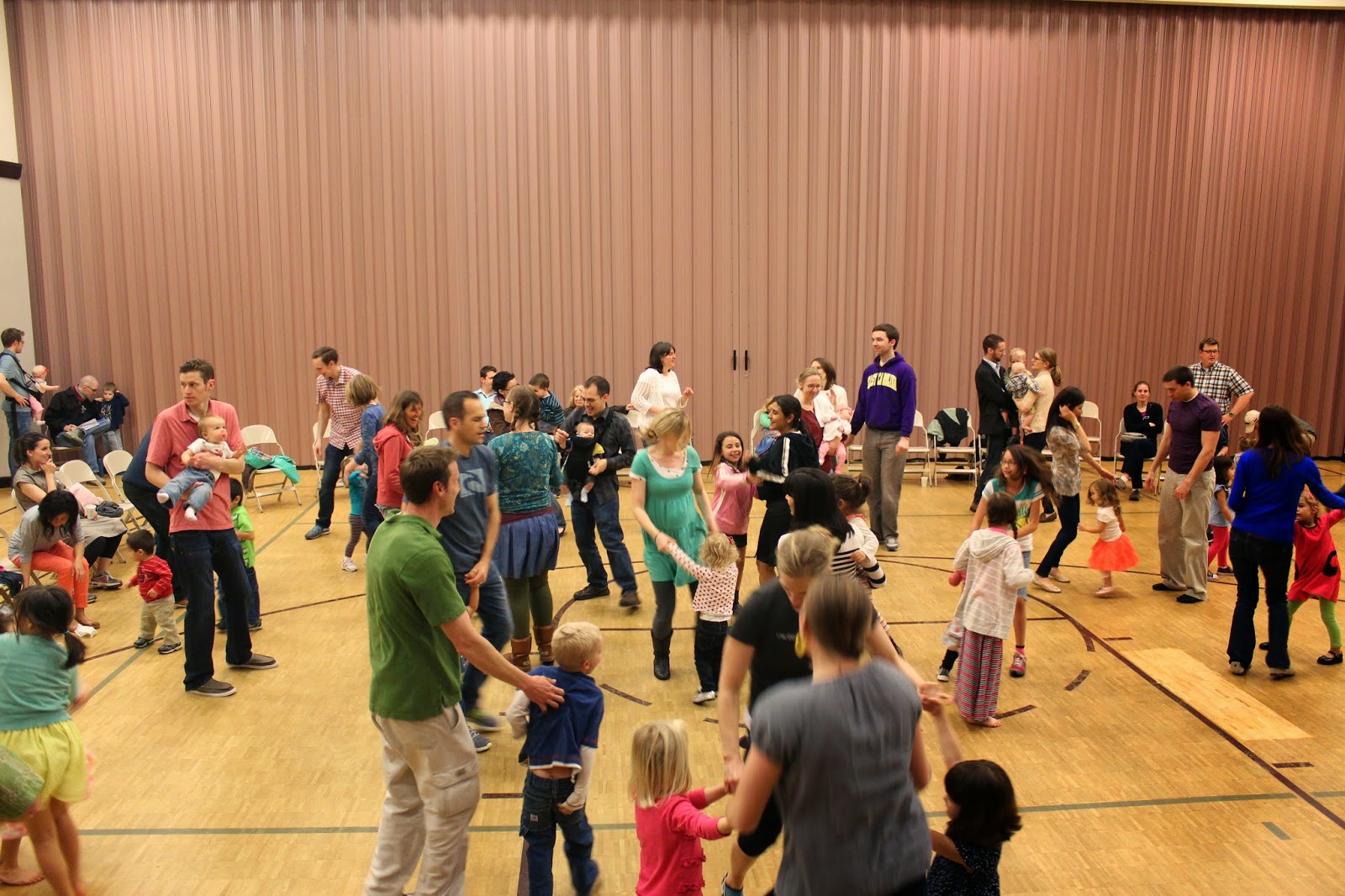 And here are a few more details, in case some day down the road I want to replicate this event in a new setting:

Budget?  $100, although we used more like $120 because I really wanted good quality flyers for our advertising.  We spent about $60 - $70 on all sorts - but mainly chocolate varieties - of cookies and drinks (that's ALL we served - so simple) and there were exactly 2 cookies left over at the end, we spent about $20-$30 on decor, and another $20 or so on copies of big flyers and small inserts for Sacrament Meeting programs.

Set up?  In preparation for the dance we had a balloon blowing party the night before to prep for the balloon pop game as well as the "cloud" balloons that were part of the decor, and we met at noon on the day of the dance to put up the decorations, set up the big semi-circle of chairs, set up the AV and arrange the refreshment tables how we wanted them.

And I think that's it!  If you're still with me, you deserve a prize.  Enjoy! 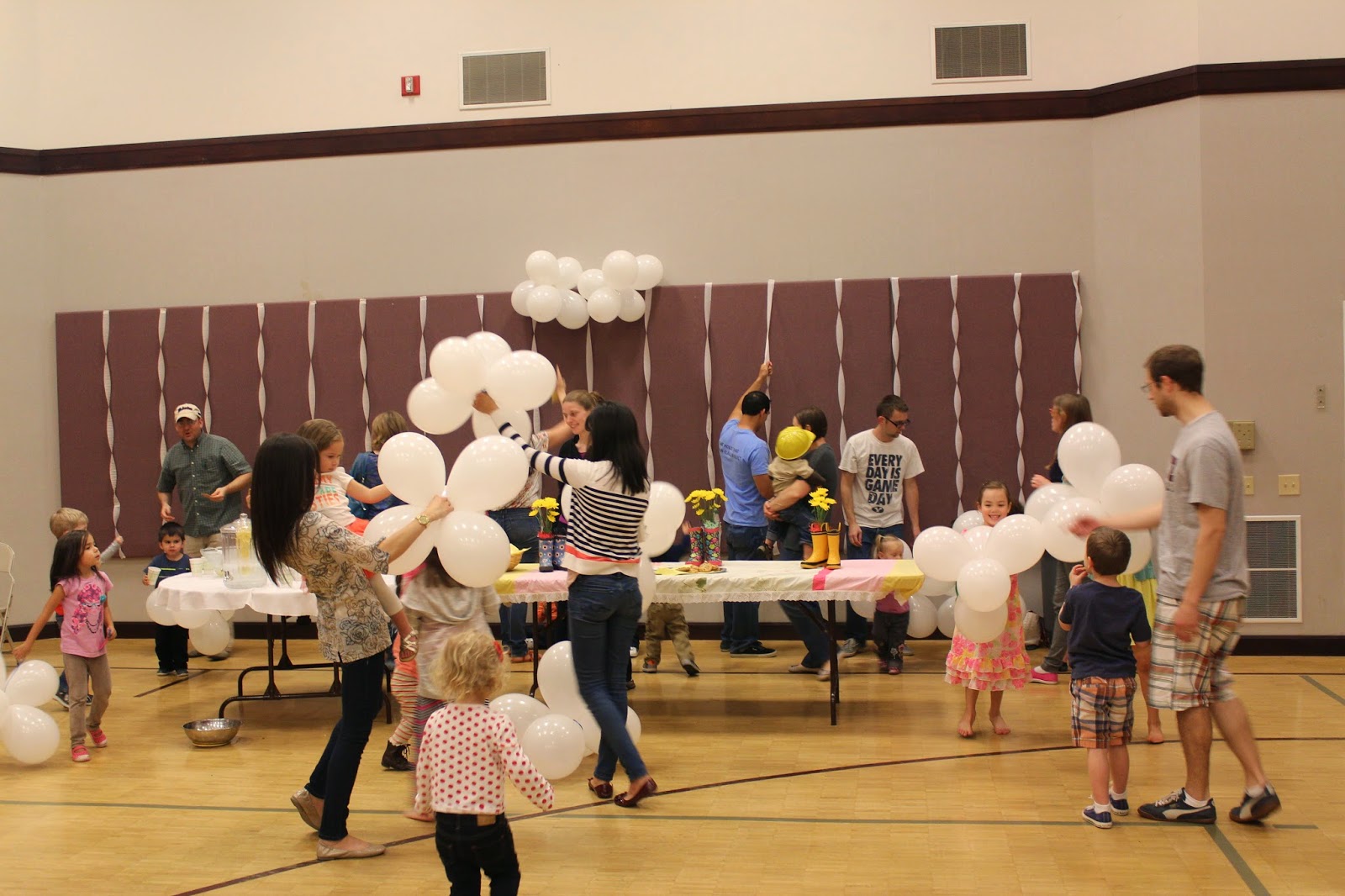 This is brilliant! Thanks so much for the playlist and the details of all your planning. Mwah!

I am so glad you posted this! What a great smashing success story! The boots on the tables are my favorite, and I love your playlist. Great job, Ms. President.

Great idea Metta. Could use something like this in our ward I reckon. Thanks for sharing xx