This summer we had the very unique situation of having a full two-month gap between Marcos' graduation from UNC and his start date for work at Fidelity.  My first thought was to take a lengthy trip to an exotic destination - Paris, or Sao Paulo to visit family, or, or, or - and then we realized that although it was a unique thing to have two months of zero obligation to really be anywhere, Marcos' first pay check would not come until after he started working.  Oh yeah. And that two month gap meant that our savings would essentially have to last us from the end of our student loans to the beginning of employment. Oh yeeahhhh.

So, enter Travel Plan B.  Washington DC!  A scenic 4-hour drive from Chapel Hill, and right at our budget. The first Monday in July we picked up my mom and set out in the morning, had a picnic along the way at a rest stop, and went straight for the National Zoo!  The Zoo in Washington DC is part of the Smithsonians, which are all free of charge, but we had failed to read the fine print about paying $22 for our parking spot.  Oh well, somebody has to pay for panda bear live cam. 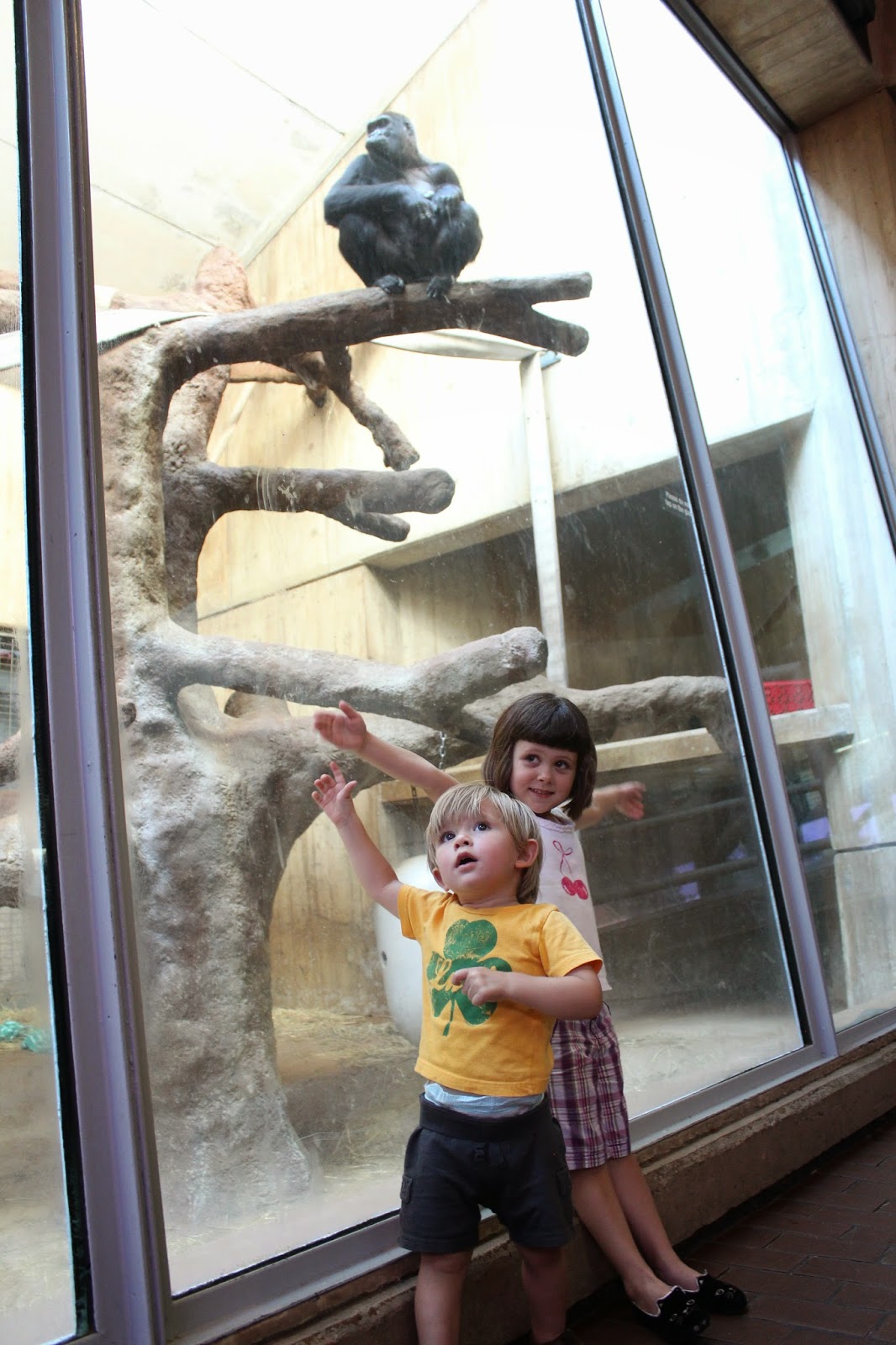 The gorillas were our first stop and they really are quite marvelous, except that they have such revolting habits.  I couldn't even wrap my head around what they were eating, and what part of their body it had come from.  Each time I watch an ape it seems to be more revolting than the last.  Do they think that about us too? 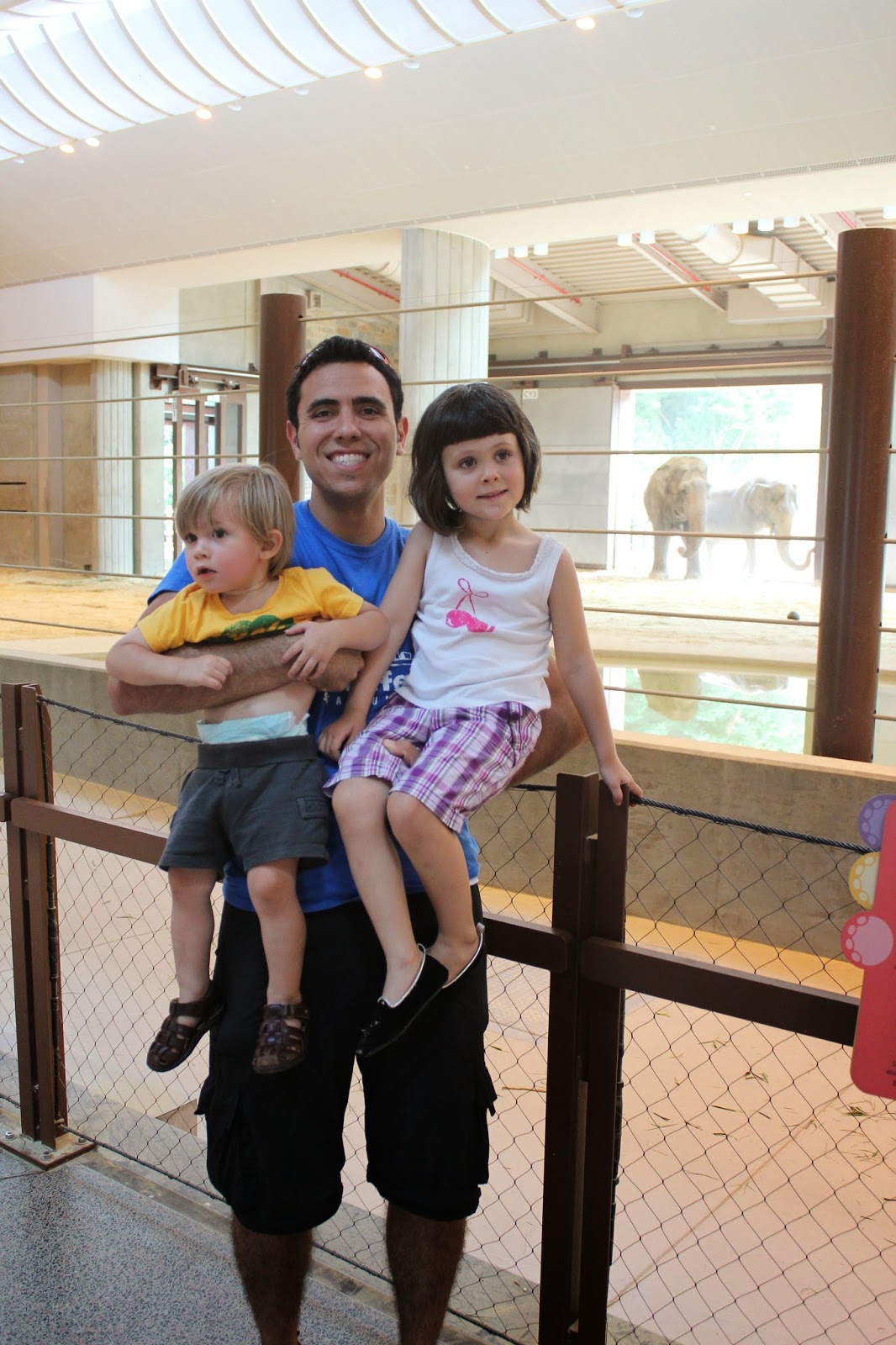 And then the elephants.  Peaceful, and gentle, at least when we were watching.  But I could not frame a photo without elephant poop in it.  It was impossible. 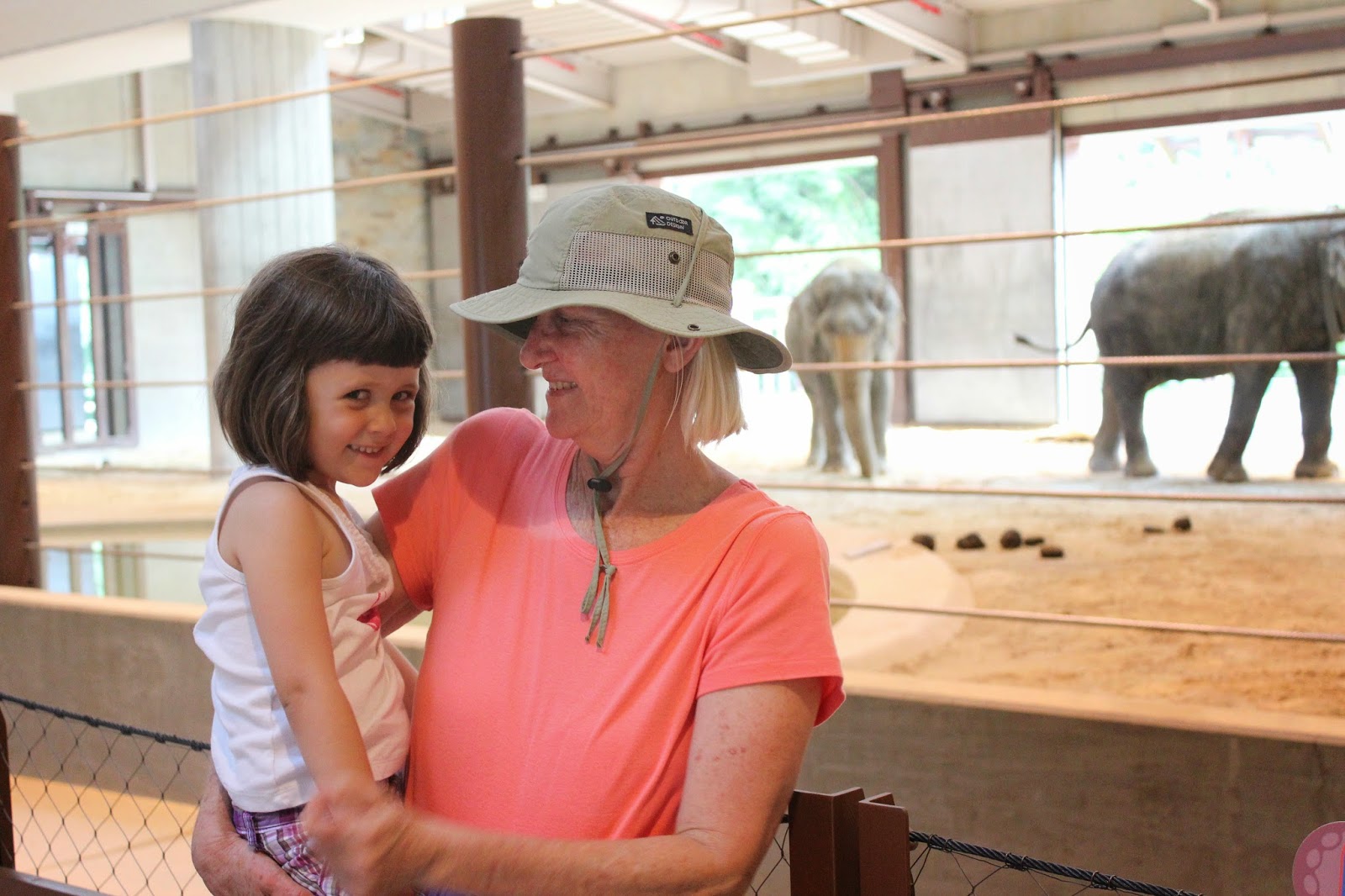 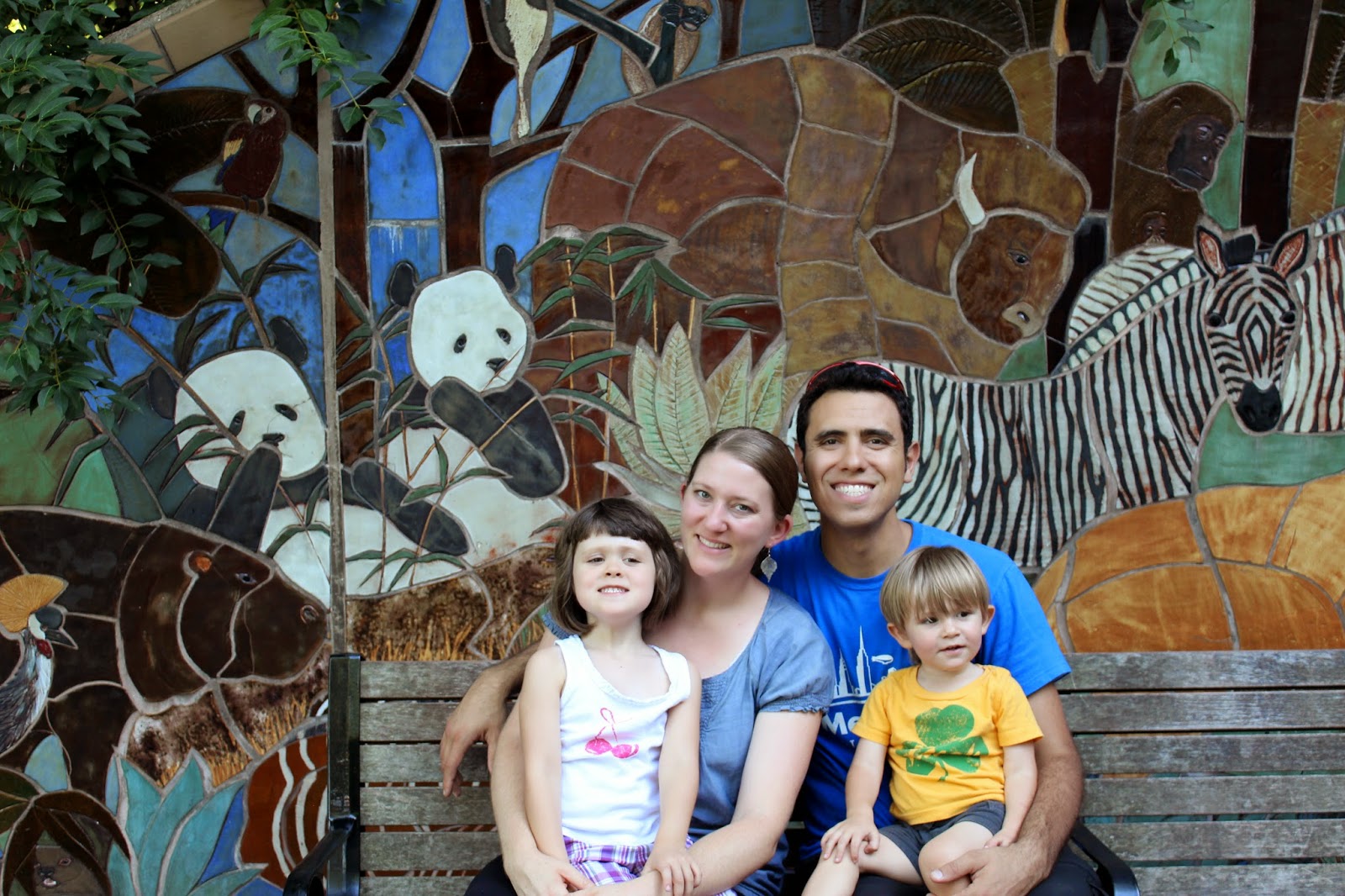 We had a good time at the zoo, but unfortunately we arrived just five minutes too late to see the pandas, so we captured them in mosaic instead.  I know, it is a little embarrassing that we went all the way to the National Zoo and missed the pandas, but I like to say that we leave some things unseen so that we always have a reason to come back.

After the zoo we went to dinner at our favorite Arlington "Bus Boys and Poets" restaurant and we were thoroughly exhausted after hours of driving and walking through the zoo on a hot day.  Luckily, our hotel room was nice at the Courtyard in Arlington, and late at night Marcos and I took a walk around the neighborhood, to wind down and have a few minutes together before heading to bed.

In the morning we took the metro downtown and visited the Museum of Natural History.  I wasn't sure which of the Smithsonian museums would be the most kid-friendly, and I think we did well.  The gems, the dinosaurs, and the ocean area were interesting, but it was the real dead mummies that sealed the deal for Gigi.  Are all 4-year olds so captivated by morbidity? 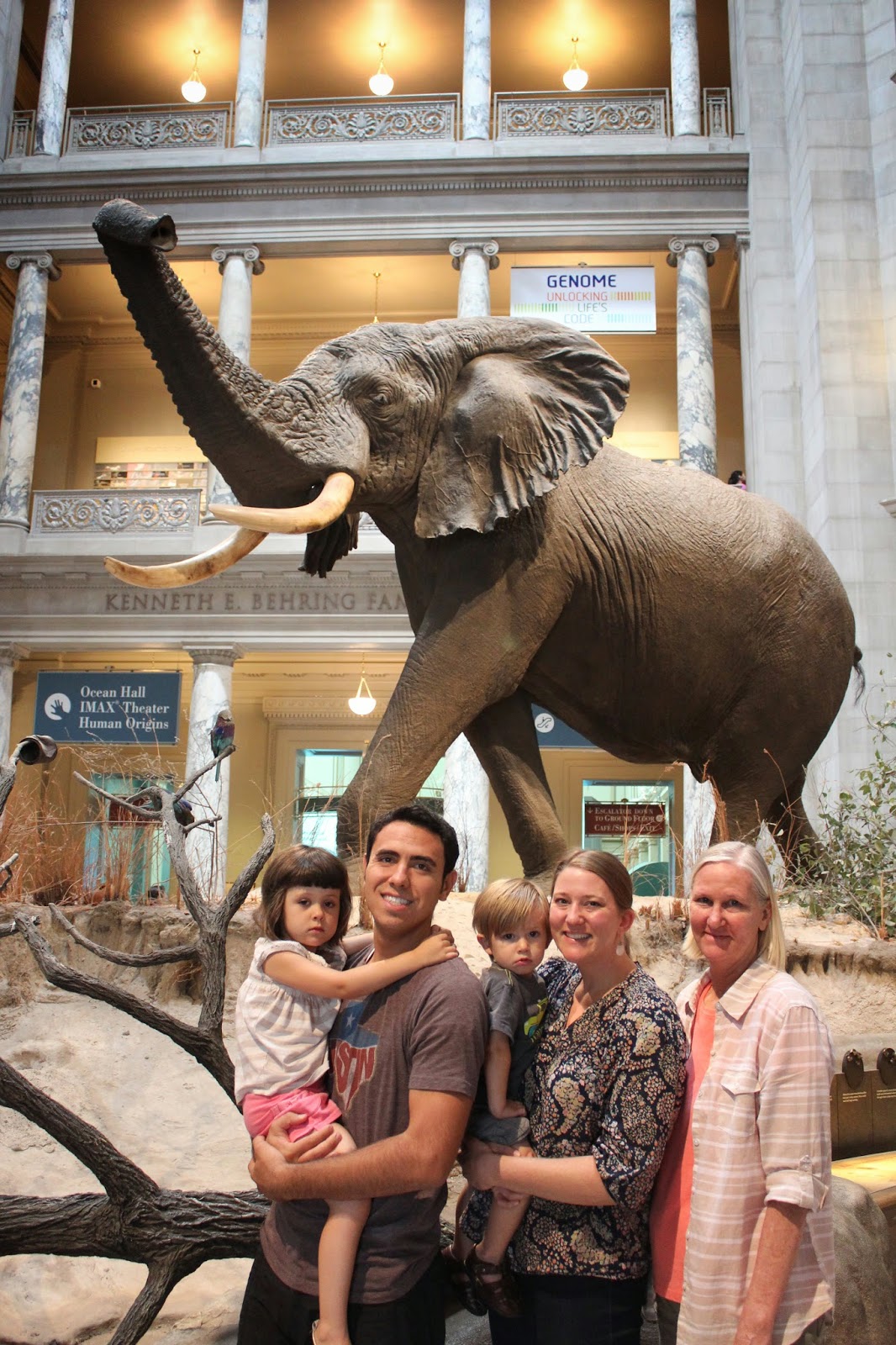 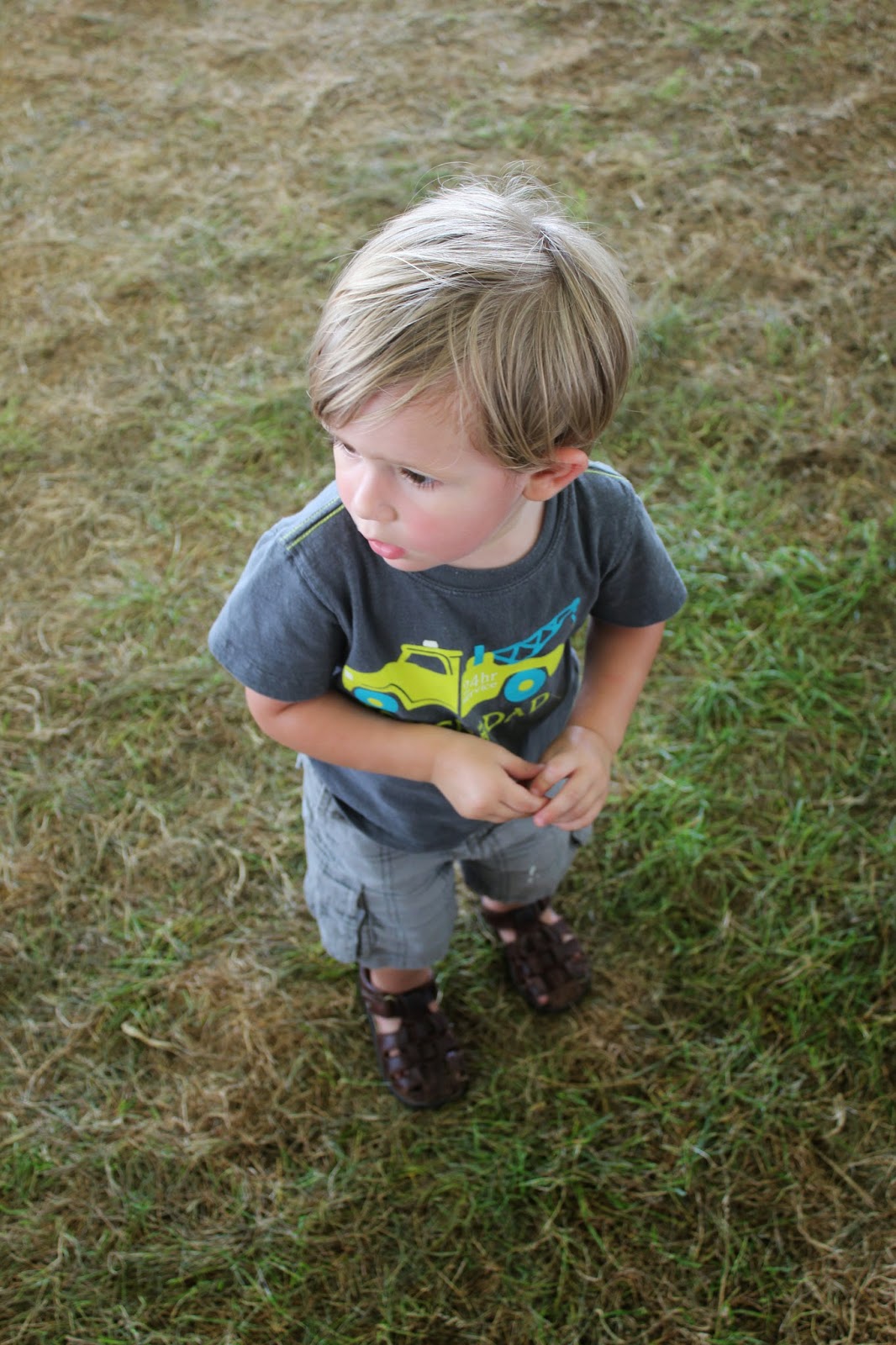 After the Museum of Natural History, we walked across the National Mall and stumbled upon a cultural festival and some incredible mabodofu, a Chinese dish we ate a lot in Japan.  One of the great things about DC, besides free entry at all of the Smithsonians, is that it is easy to stumble upon fun cultural things that are happening in the neighborhood.  As we ate lunch we enjoyed an informal opera concert under a big tent, and I just loved it.  I loved what I was exposing my kids to, even without any planning.

Then our friends the Coynes showed up, and things got really fun.  We have been friends with the Coynes for four or five years while Josh completed a Ph.D. in accounting at UNC, and they were staying in DC for a few weeks en route to Memphis, where Josh has taken a professorship at the university.  So, they took the metro into the city to sightsee with us, and it was really nice to see them again. 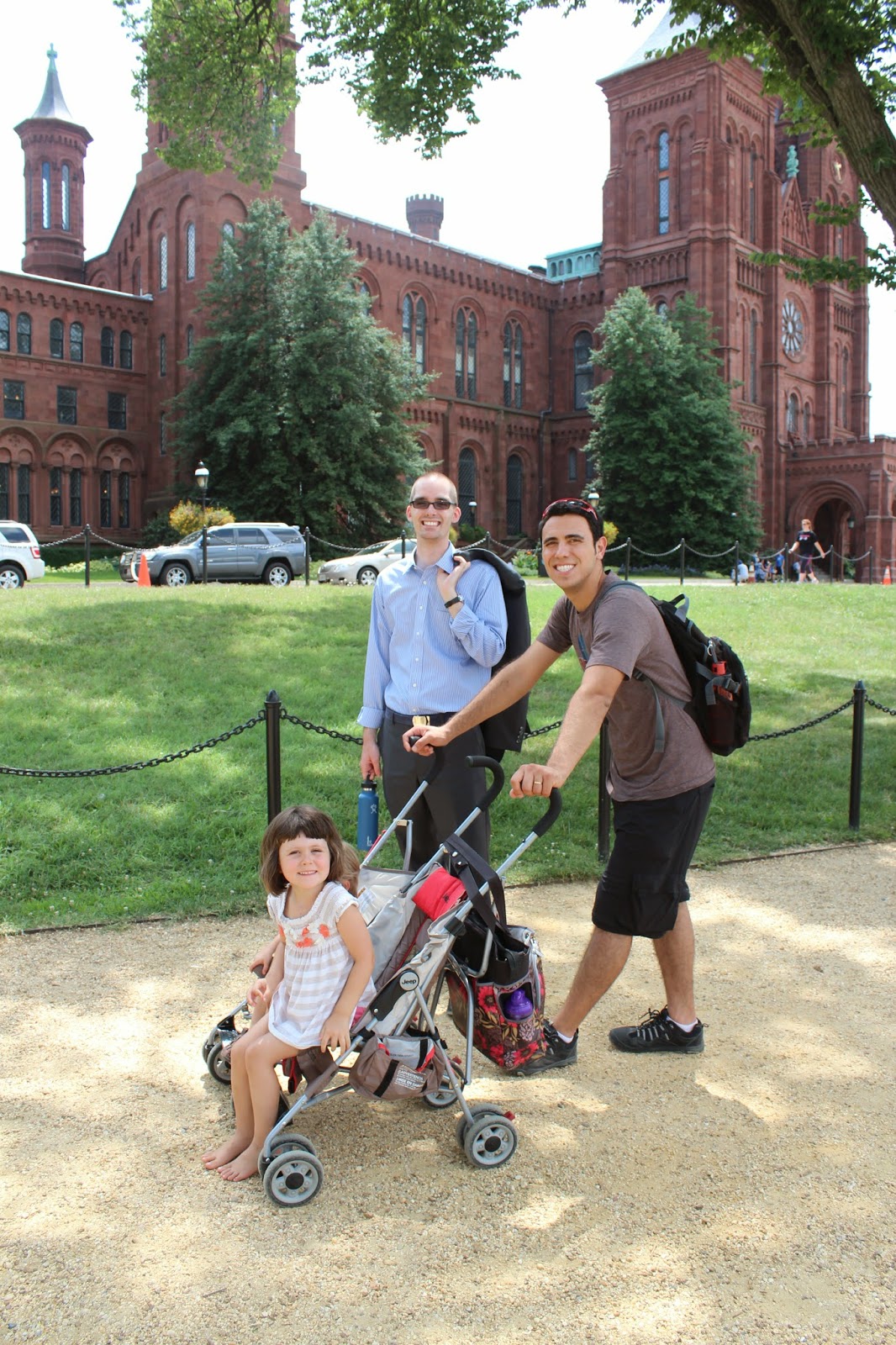 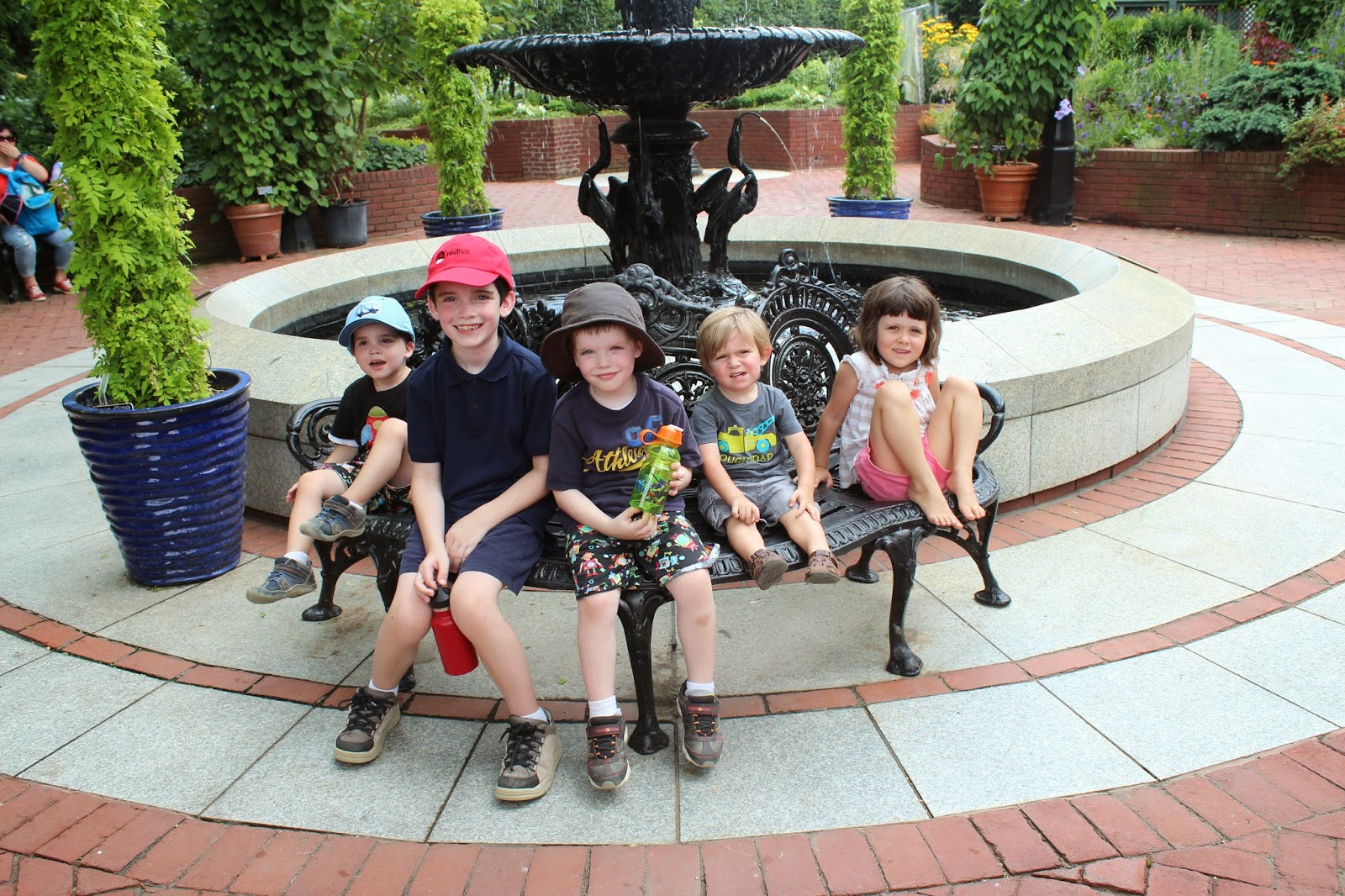 Axel, Guy, Leo, Orion and Gigi.  And Josh looked so dapper in his new clothes for work, so we had to capture him too. 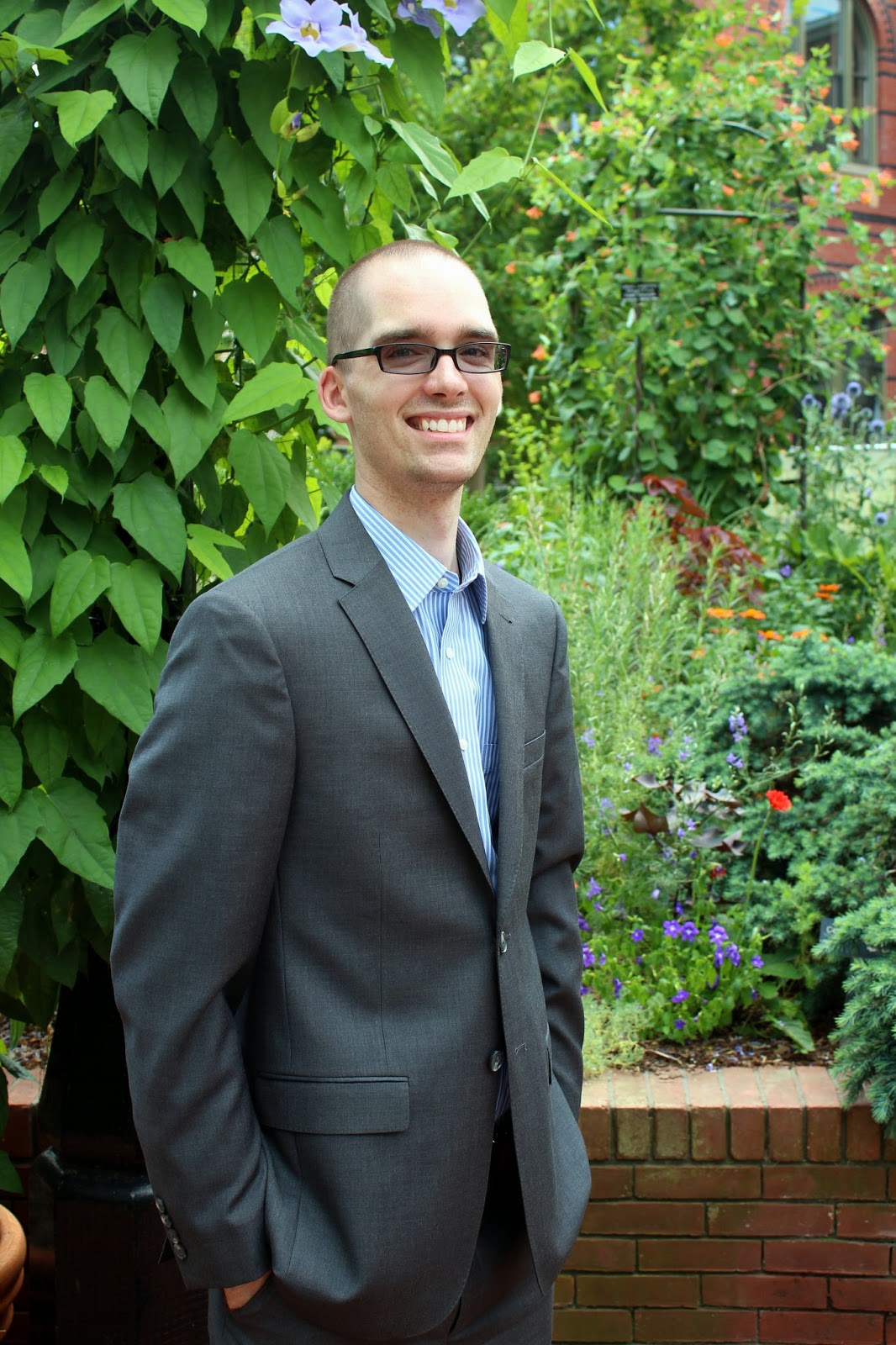 To beat the heat, we went to the Air and Space Museum, and there was a lot of eye candy for people who like aviation.  Emily's dad is a real rocket scientist, so it is always fun to hear what space craft he has contributed to, or what he is currently working on. 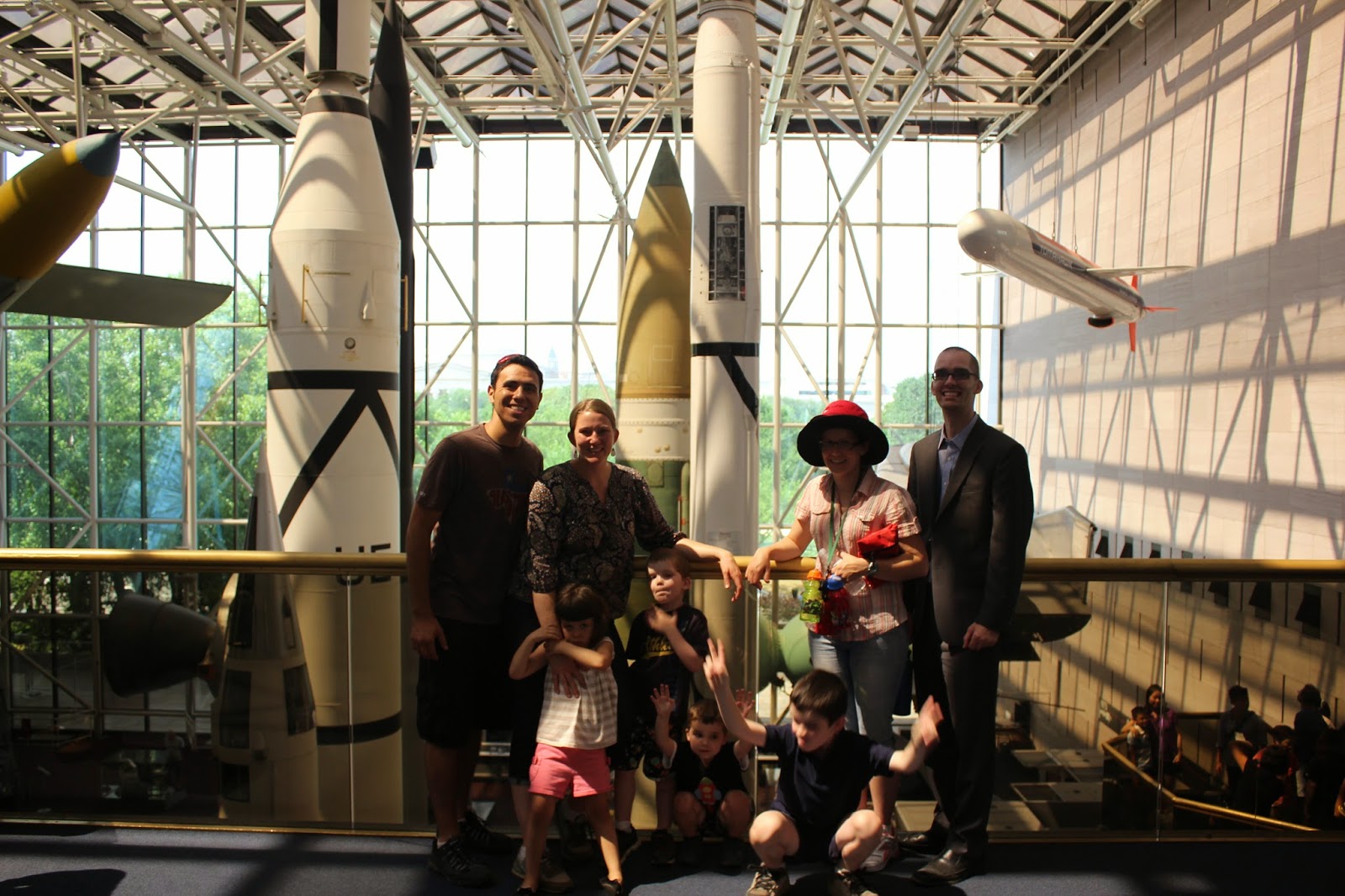 After an afternoon with the Coynes, we took the metro back to Arlington, and met one of my best friends from graduate school at the Lebanese Taverna. Katherine has lived in DC since we graduated in 2009, and we have been lucky enough to see each other quite a few times over the past few years.  Catching up with Katherine is always a happy time.  Good company over great food was double bonus!  One of our goals this trip was to have some great ethnic food, and we chose the perfect place.  Yum! 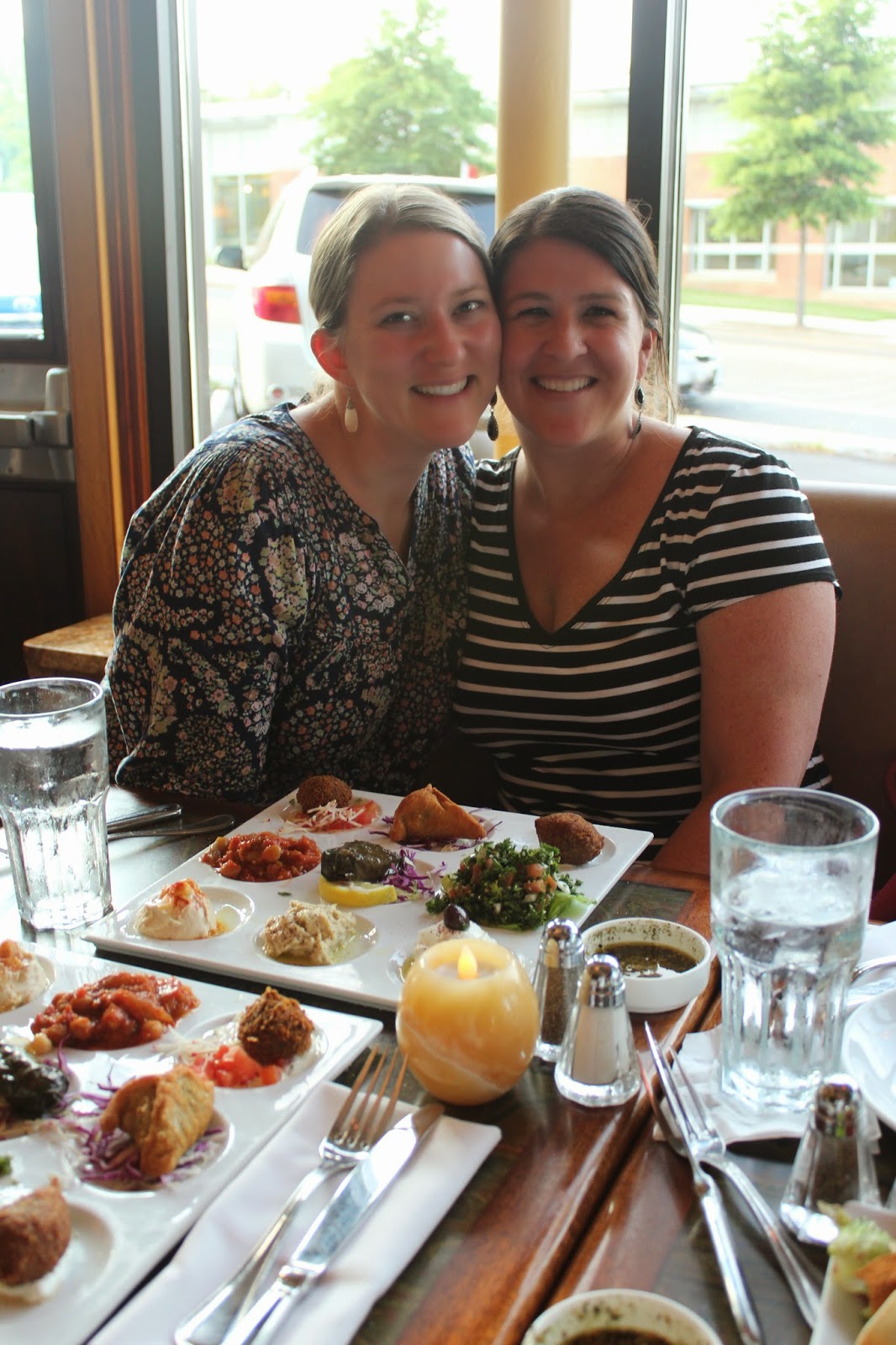 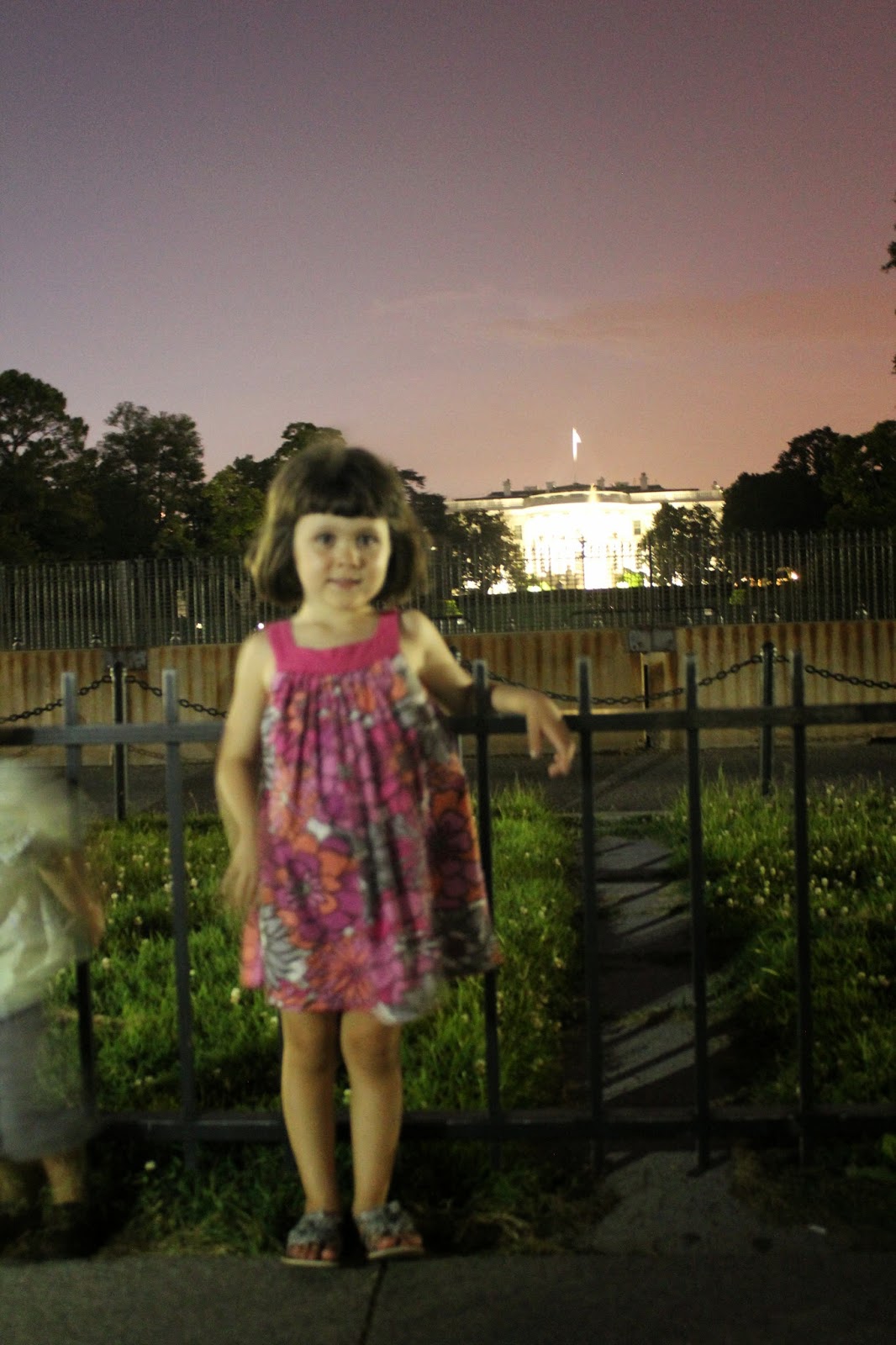 After dinner with Katherine, we drove back into the city and got to see it by night!  The photos obviously suffered from low lighting, but it was much better timing for us.  We had planned to walk up and down the mall that day, from the museums to the Lincoln Memorial, but that stretch, with kids, in the beating sun, is pretty long and miserable.  So, we decided to come back in the evening.  We parked roadside and walked the kids over to the White House, and then drove over to the Lincoln Memorial.  By then it was nearly 11pm, but we were in good spirits, there were so many people milling about that even the lateness of the hour didn't make us feel unsafe, and it was so pleasant in the warm evening.  As a mom, there was just something spectacular about showing my daughter these major national monuments. 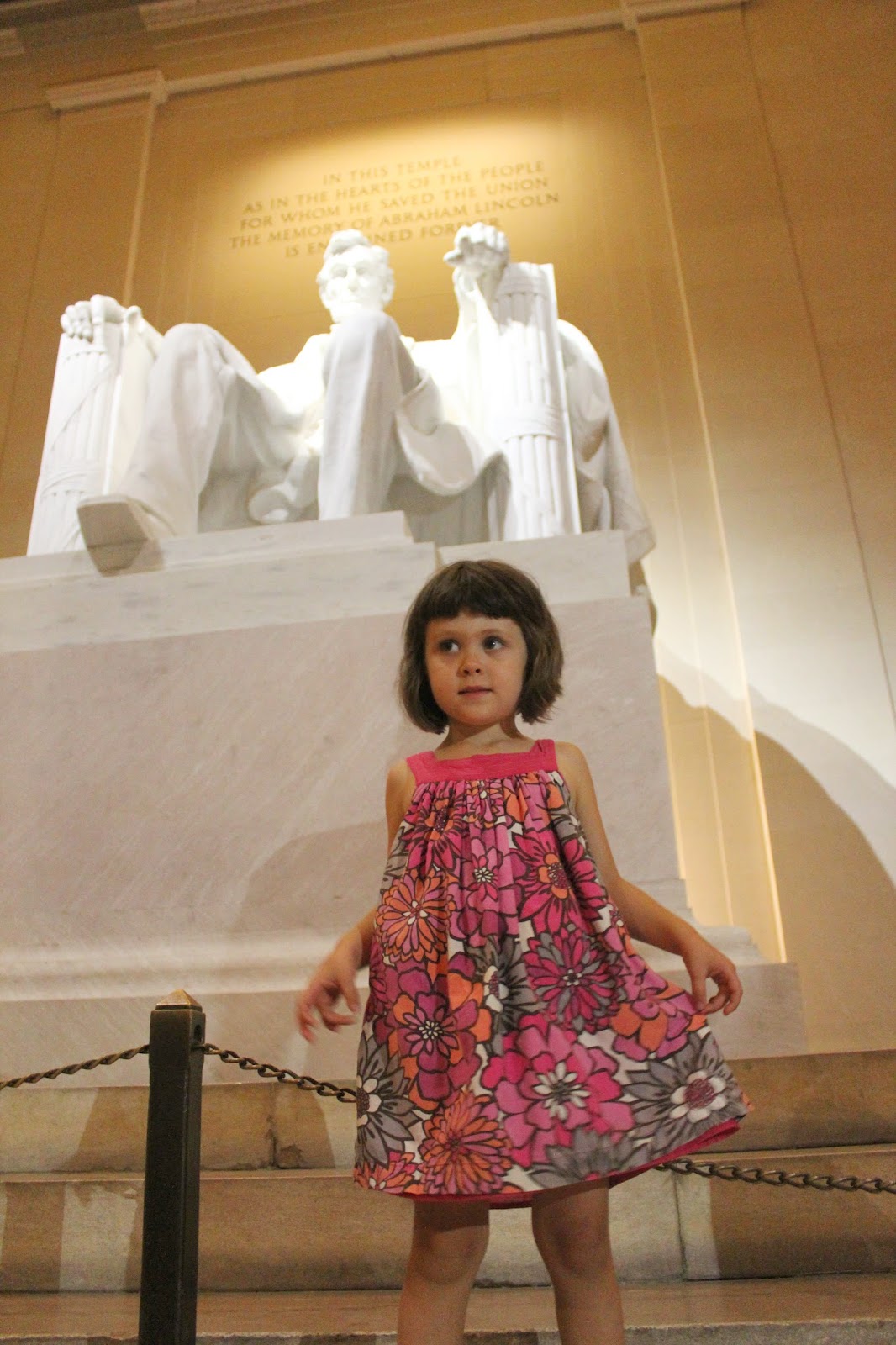 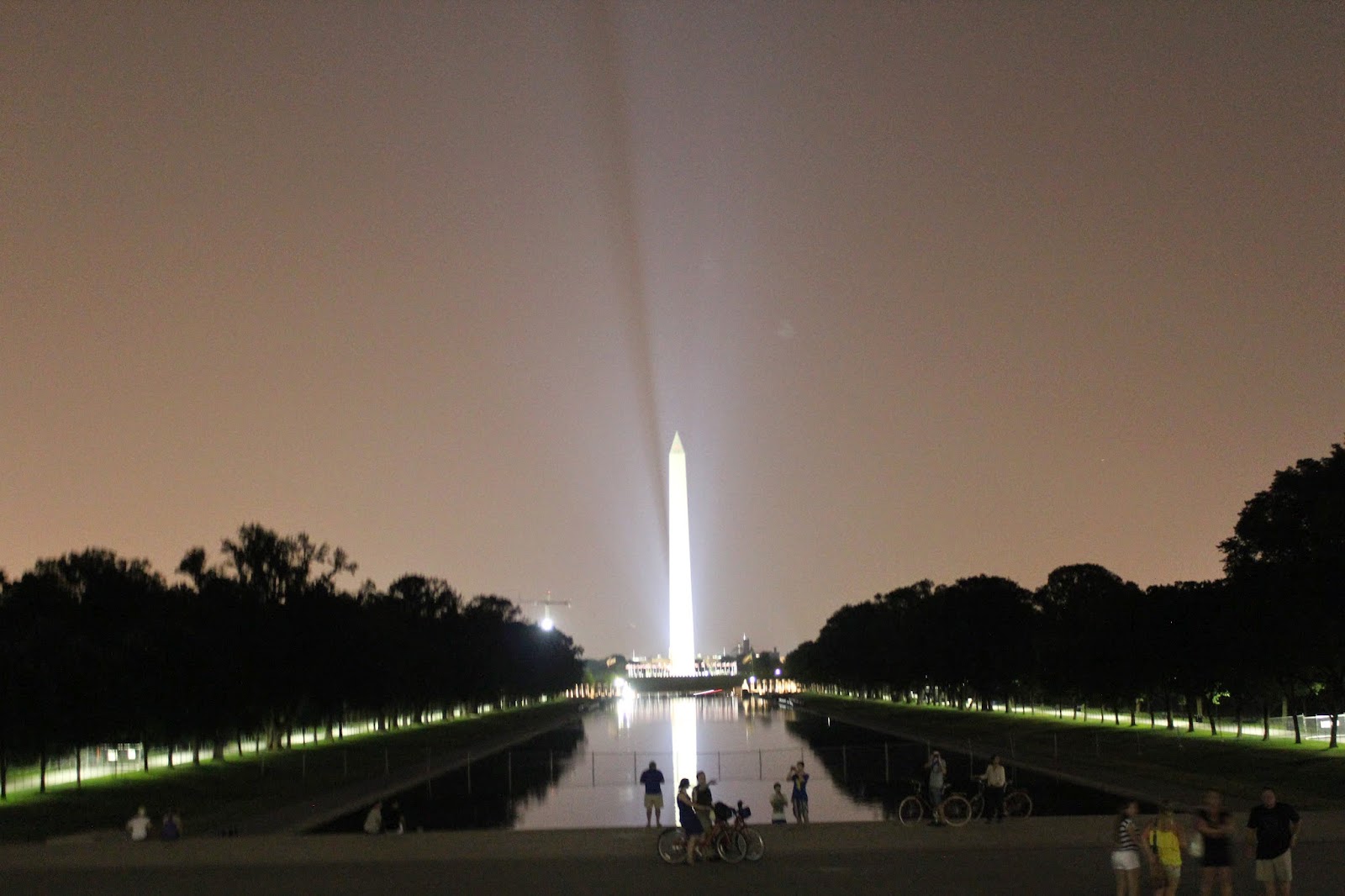 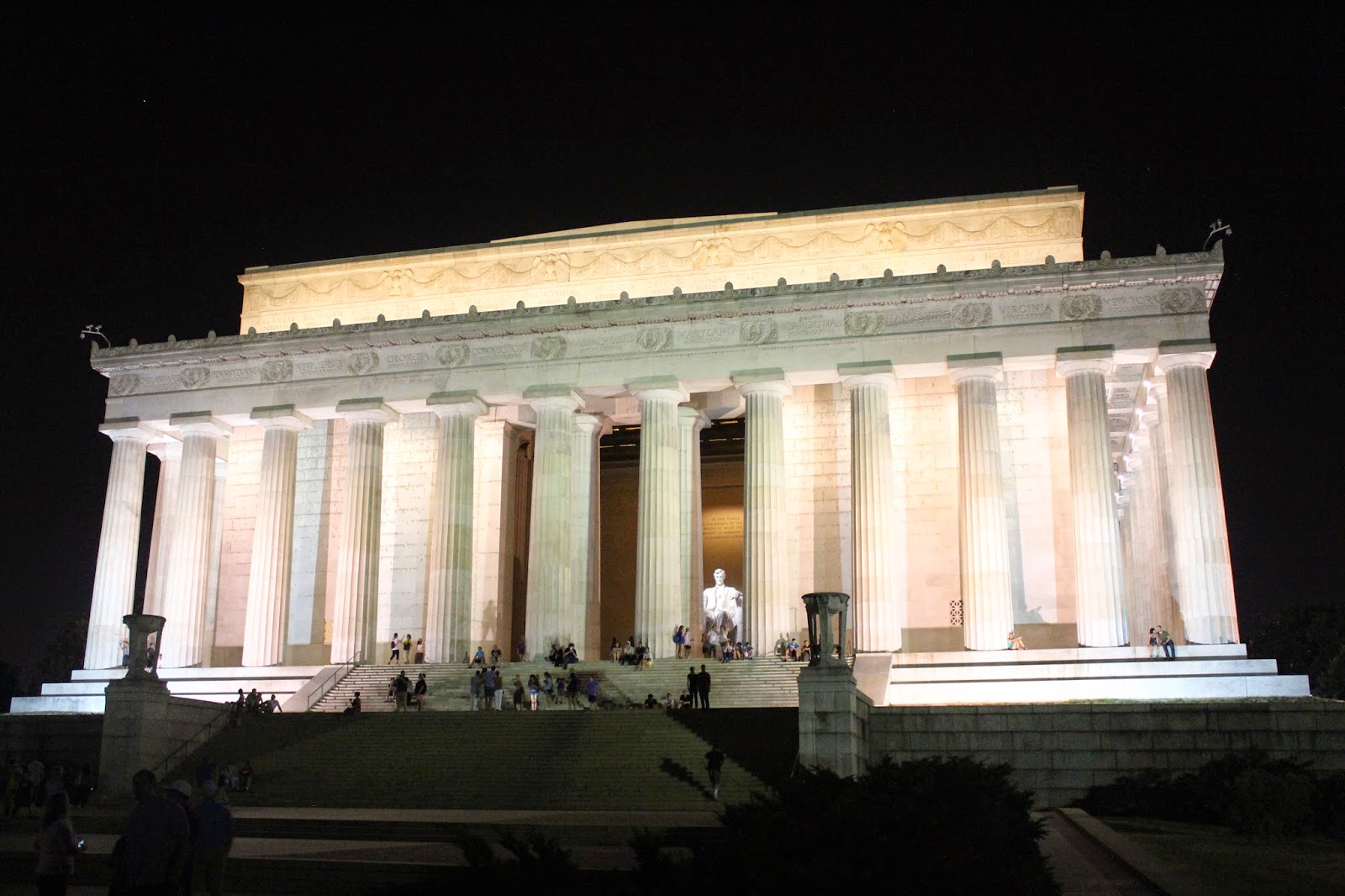 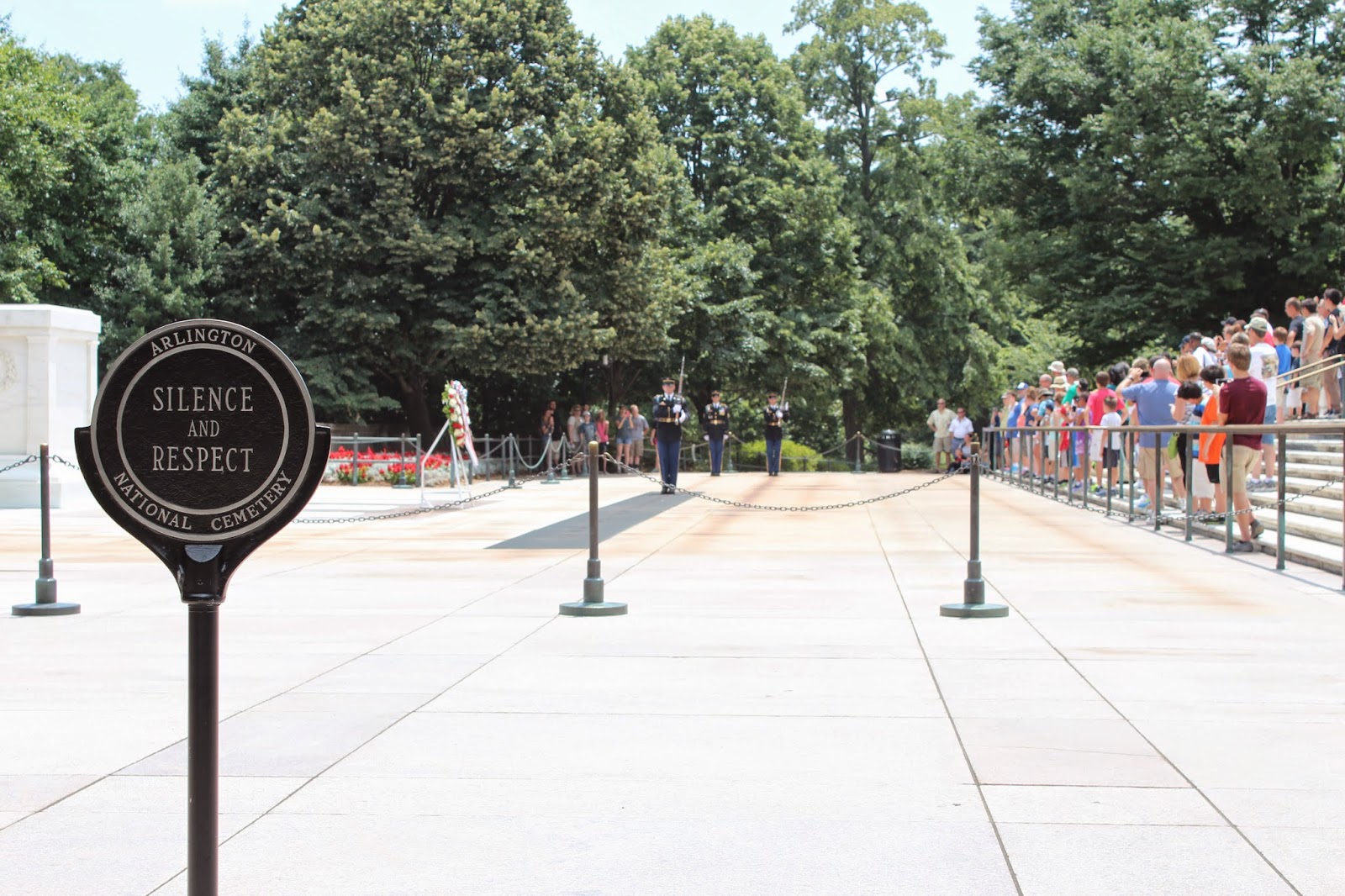 The next morning, we checked out of the hotel and packed up the van, but we still had a few places we wanted to visit before leaving Washington DC.  We went to Arlington National Cemetery, and walked around in the oppressive heat, pushing the double stroller up and down the hills.  I just made it sound kind of miserable, and in some ways it was, but in so many ways I was very intrigued by this amazing place.  I have never had much of an interest in the military, but visiting Arlington is a really quite incredible.  I love this photo below because it really captured that day well - we were so hot and tired, but Marcos was on his phone reading to us about the history of the Cemetery and the Tomb of the Unknown Soldier. We were so compelled by the traditions of the military, and the endless rows of tombstones that represent so many, many men and women who sacrificed their life for this country. 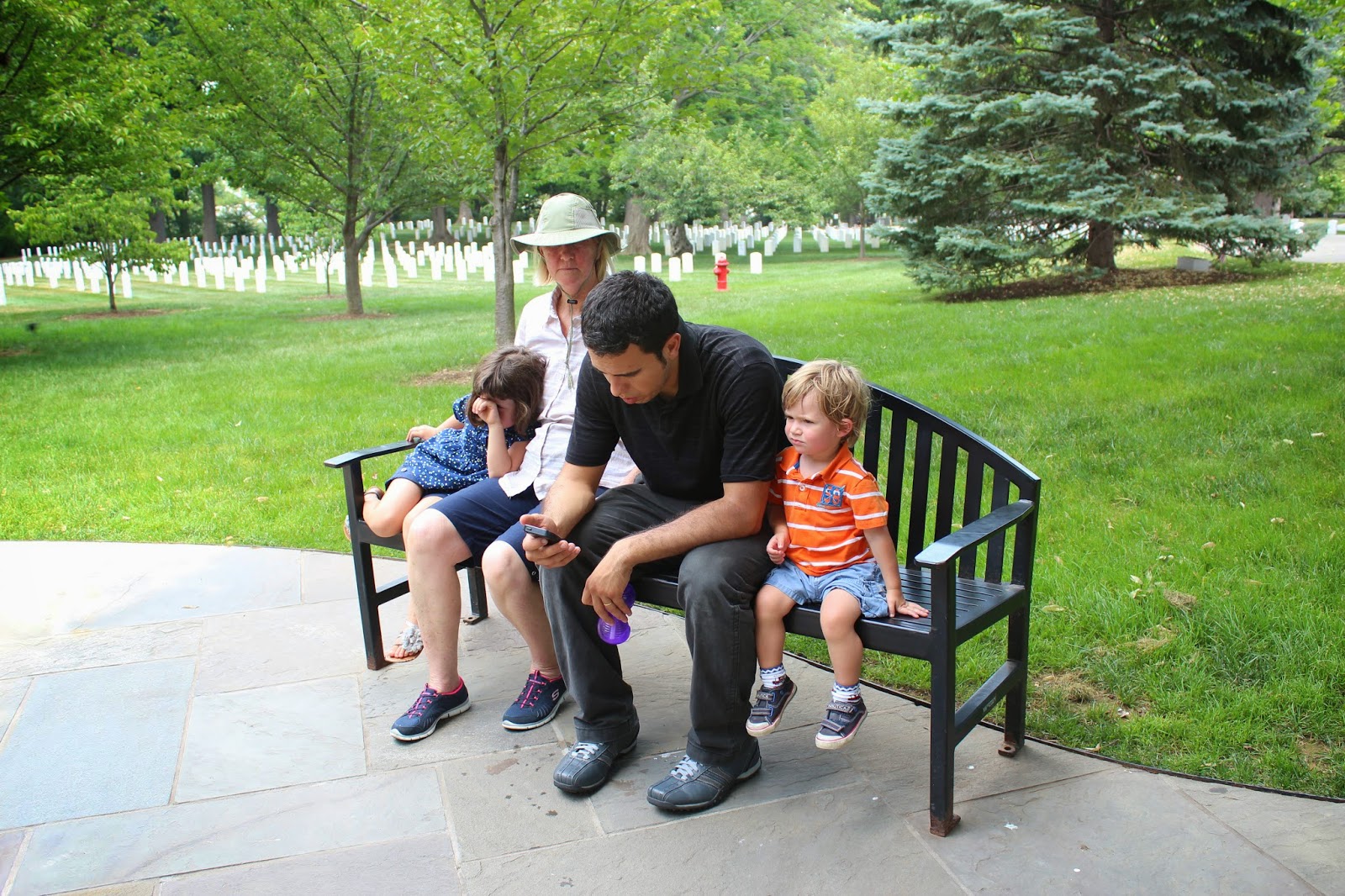 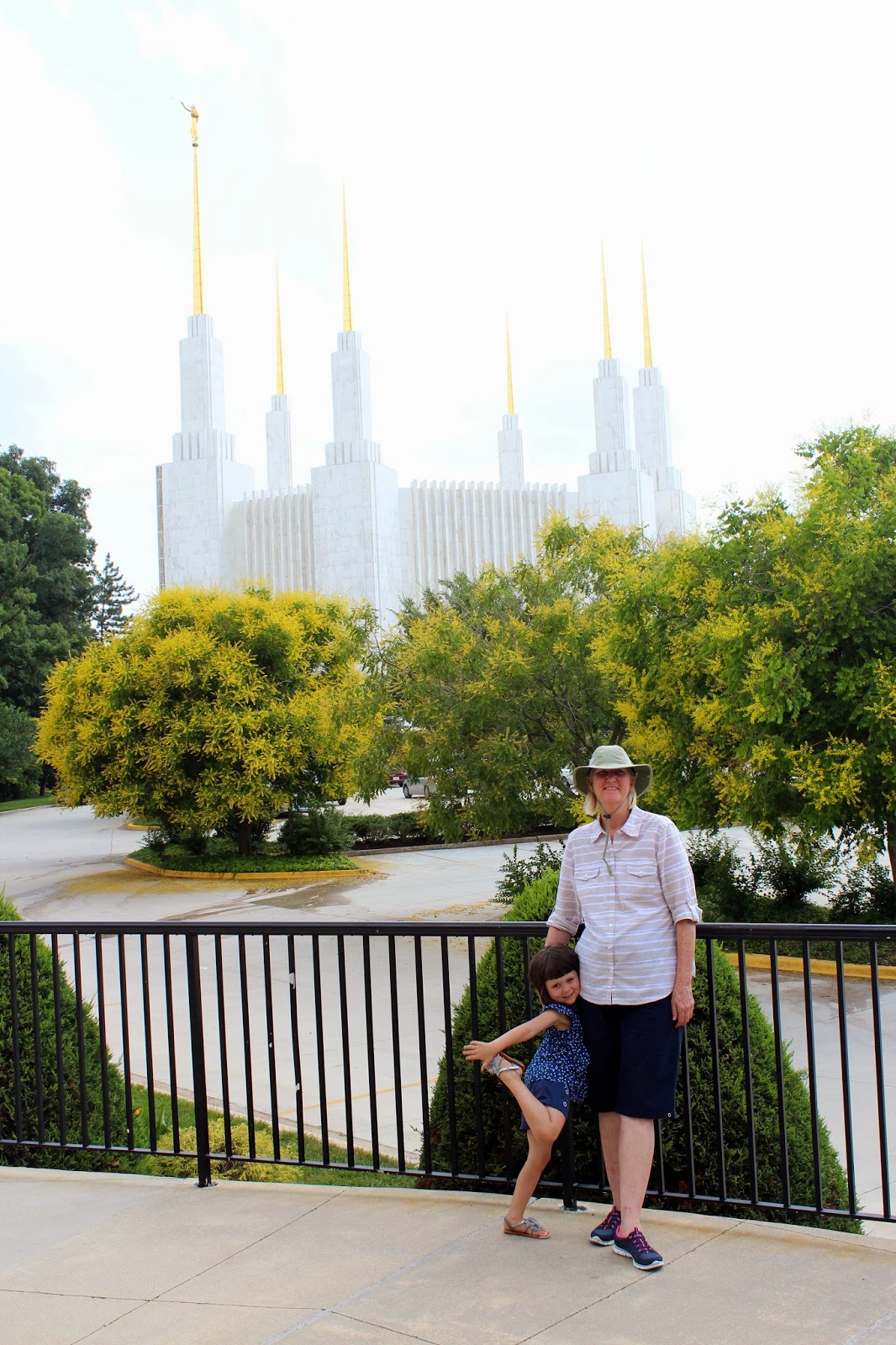 And finally, our last stop in DC was at the beautiful LDS Temple, where we picnicked on the grounds and spent some time inside the Visitors Center enjoying the cool air and the "I am a Mormon" video display.  From the Temple we drove to the home where the Coynes were staying, just outside of DC, and we grilled and had a pool party.  Not a shabby ending to our DC trip, right?  It was the perfect mixture of social time with dear friends, and winding down before the long drive home.

On the way home, Marcos and I talked about the trip and although it was fun, and we saw good friends, and we had a good time, there are things we will do differently next time.  Driving in DC was stressful, and I didn't realize how tense I had been until we were on our way home.  I also felt that because we had so few days there in the city, I had this need to pack our schedule full, and teach my daughter everything I knew about America and American History.  And honestly, it was a bit exhausting.  When we do this again in the (hopefully) near future, I think that for our sanity, it will be really important to not only look up museums and monuments, but also local parks and places where the kids can play and decompress, and we can sit and have downtime.  The nature of traveling with small children will always mean that relaxation is hard to come by, but it is a worthwhile goal for our future adventures!
Posted by Metta at 10:42 PM