We are coming up on the final few weeks of coop preschool and my heart is already starting to mourn its end.  This has been our second year doing coop preschool with our friends, and it has been such an awesome thing for us in this chapter of our lives.  Every four weeks I get to hang out with Gigi and her buddies Ezra, Tyler and Lily on a Tuesday and a Thursday morning, and through teaching them and watching them play and interact, I have seen the kiddos grow so much this year.  They are more emotionally level, their bodies are settling, and they engage in our lessons with curiosity and eagerness to learn. 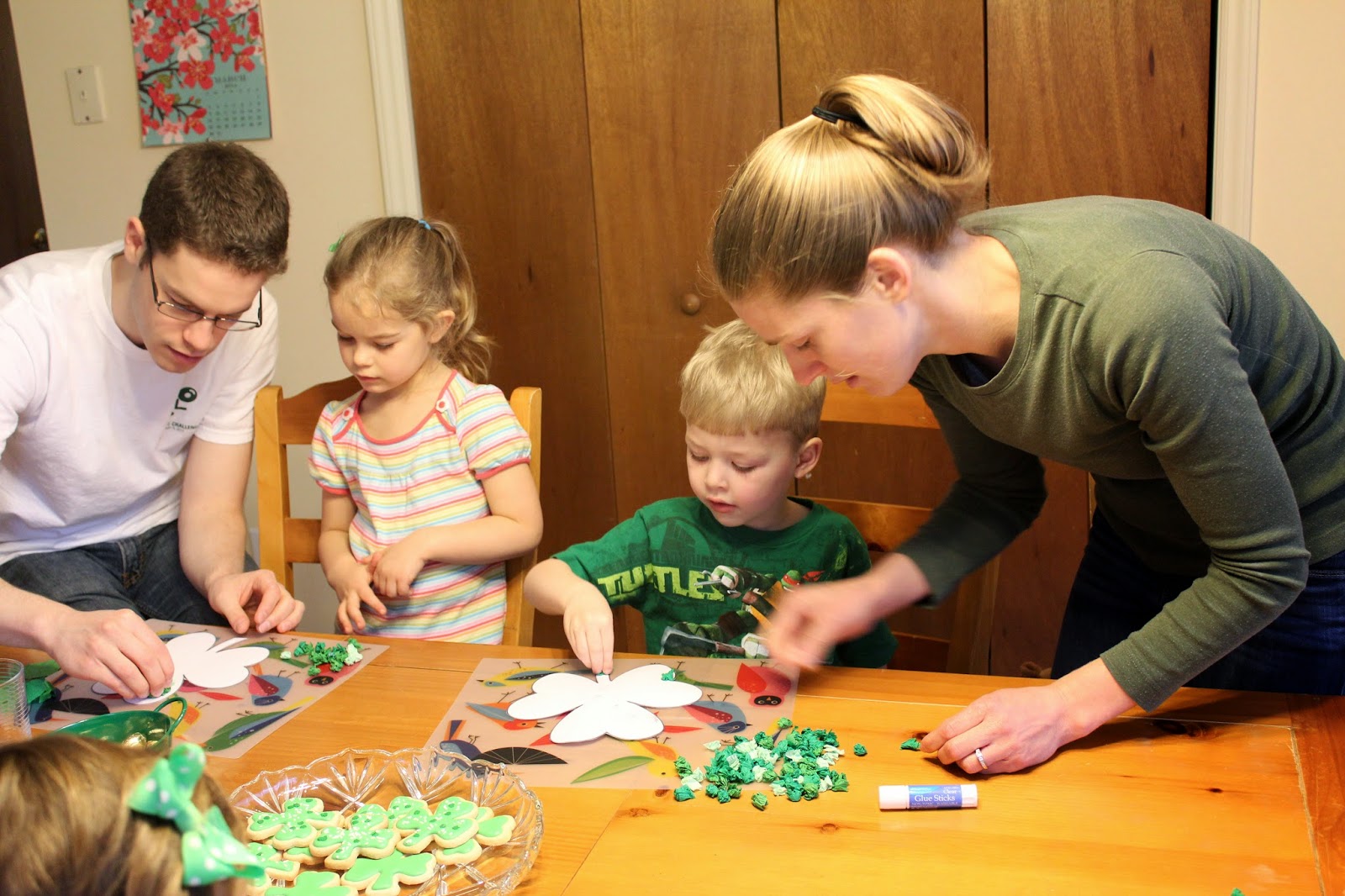 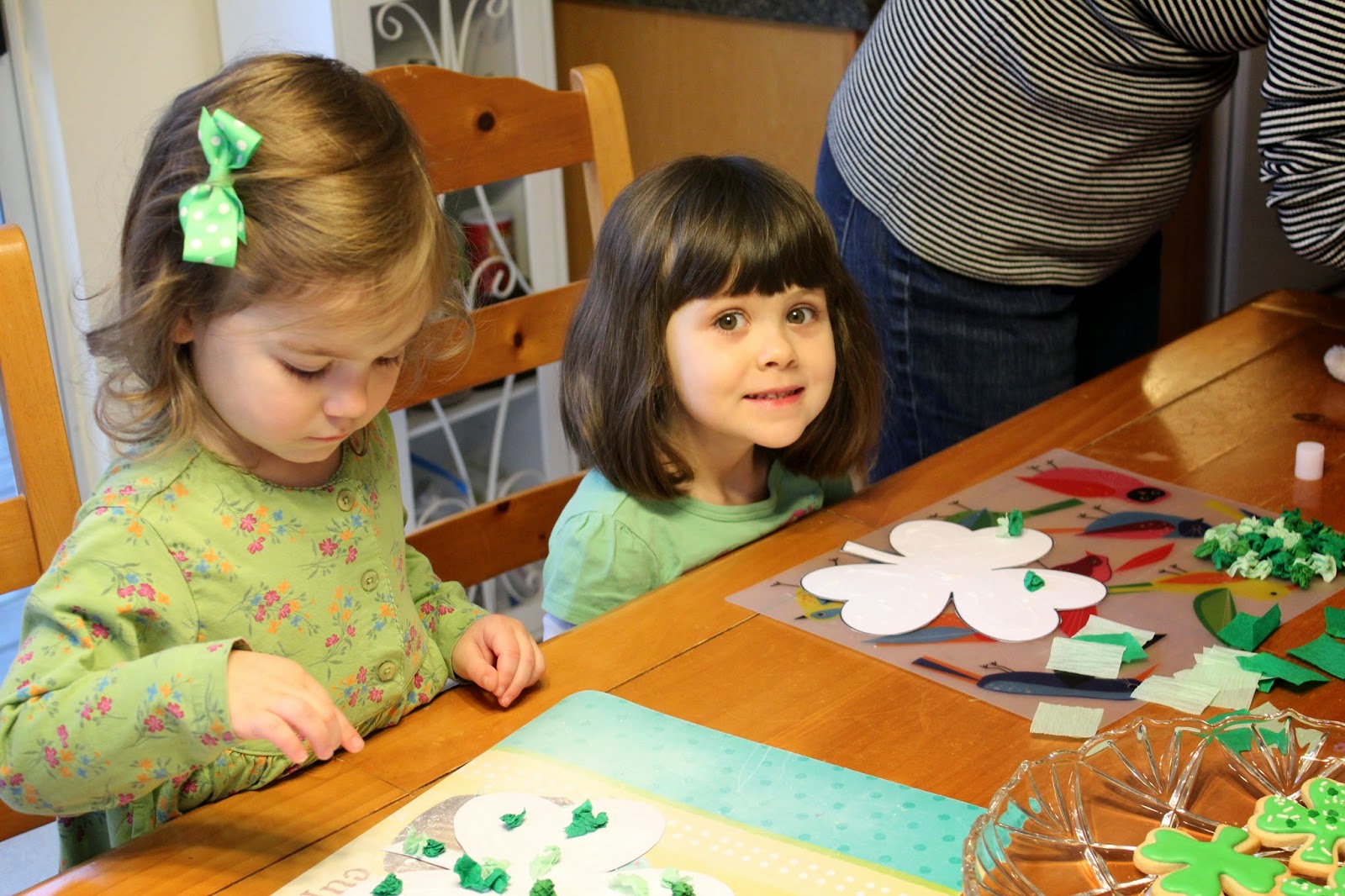 On St. Patrick's Day we had a party, which is our tradition for pretty much every holiday that passes.  I was hosting preschool that week, so we partied at our house, and it was one of my favorite preschool days this year.  Each time we do a party all of us moms prepare something special and stay at the party to lead our part so that the entertainment doesn't all fall to one person.  During circle time I taught the kids about the history of St. Patrick's Day, traditions in Ireland, and the symbolism of the shamrock, and we read a few stories I found at the library.  Then the kids followed clues around our house on a treasure hunt which was planted by "Lucky the Leprechaun" (me), and there was a pot of gold (Rolos) at the end of the rainbow.  Then for fun I did a science experiment: the baking powder and vinegar volcano experiment, with green lava instead of red.  It was momentous.  Then for snacks I pulled out a lot of healthy foods, and Ezra's mom Guenieve had made the most beautiful shamrock cookies iced to perfection with green royal icing.  After snack, Lily's dad Nathan brought out the craft supplies and the kids designed a shamrock by gluing little balls of crumpled crepe paper onto their cut outs.  And finally, Tyler's mom Kim took us into the living room and showed us a clip of Riverdance and we all got sweaty trying our hand at hopping and kicking like Irish dancers. 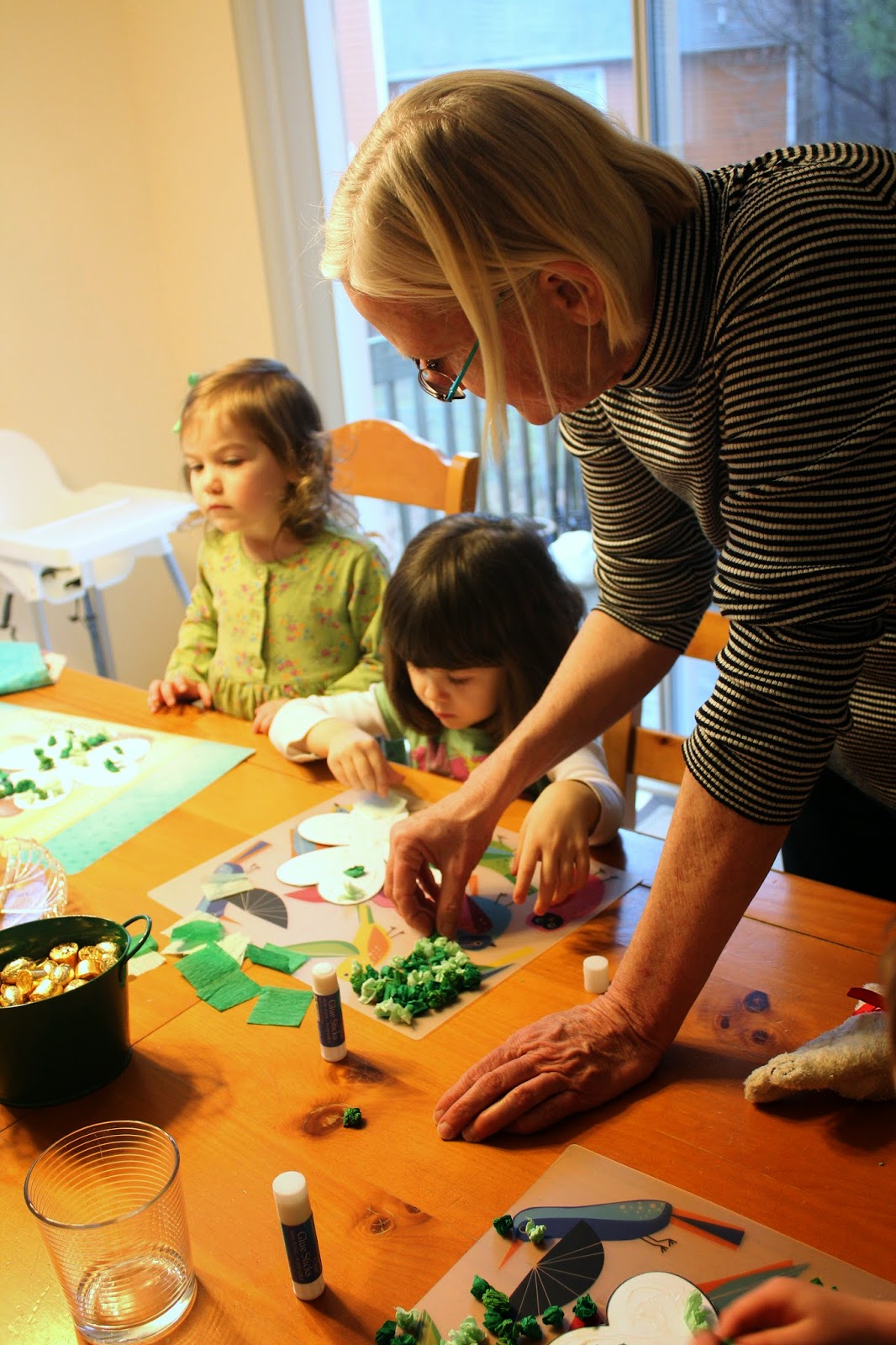 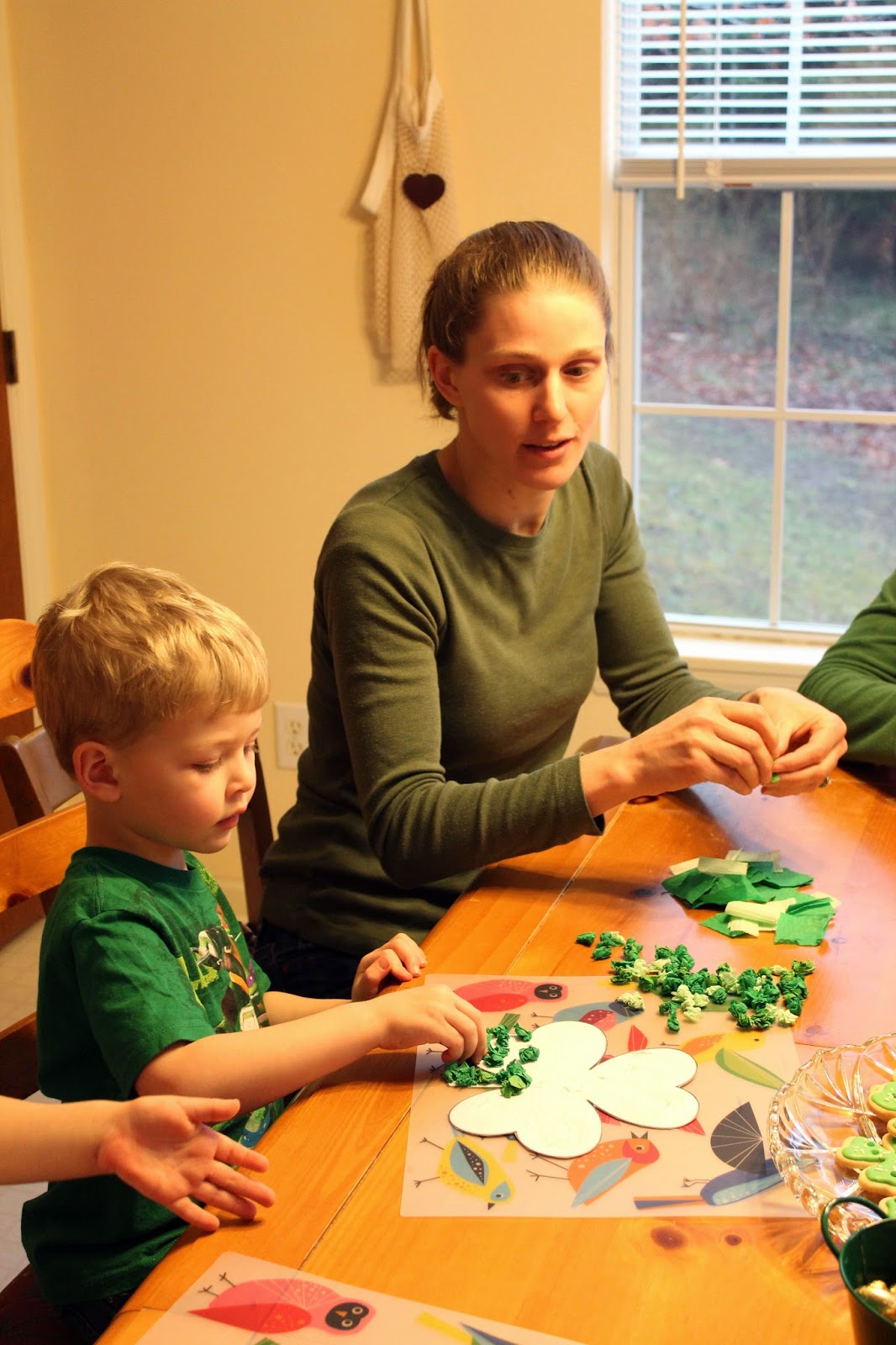 And now it is time to plan for next fall, and I'm not sure what direction we will go in, with Gigi and her schooling.  We always told ourselves that the year before Kindergarten would be the year we bite the bullet and pay to have Gigi go to a "real" preschool and get used to having a real teacher, the routine of a school day and the benefits of a whole room full of socialization, but now that option is not as clear as we would have hoped.  The primary hang up (and blessing) is that with Marcos having found a job that does not require us to move away from this area, we have access to the Emerson Waldorf School which is a mere 15 minutes away.  Having grown up in the Honolulu Waldorf School and loved every second of being there, I have always hoped to provide that kind of education to my own children.  We would LOVE for Gigi to start at the Emerson Waldorf School next year, but she is currently on the waiting list, and even if she gets in, we think it might be prudent to find a good alternative and save up for a year before jumping in to a private school tuition.  So, we have a big decision to make! 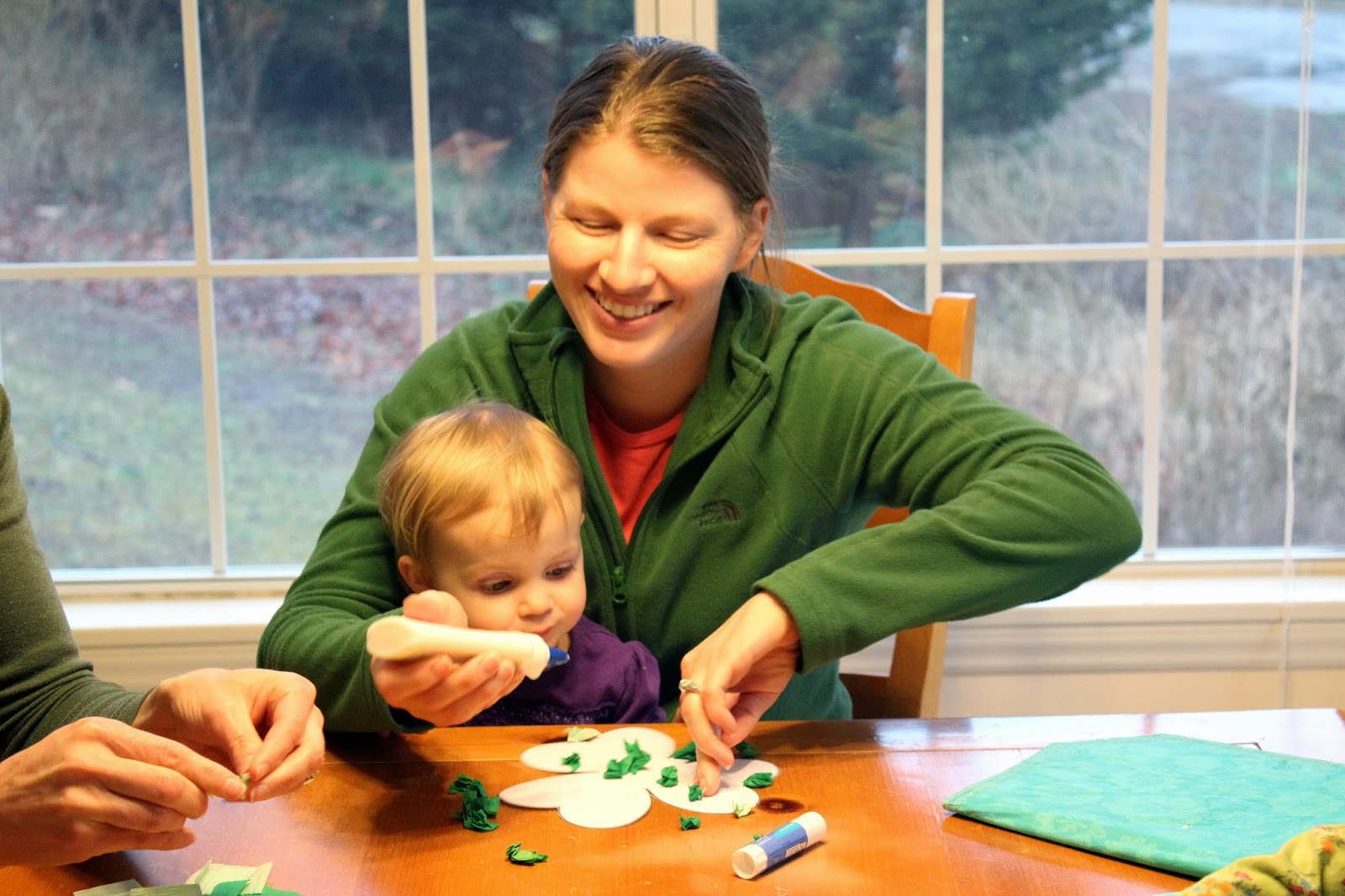 But whichever way the tides take us in that decision, we will definitely miss our coop preschool.  It is definitely a highlight of my week to drop Gigi off at a friends house, knowing that she will have a fun time, learn a few things, try out new skills and play with her friends.  We have really lucked out to have this small group of dedicated moms in our lives, and we hold them dear for the love they have given our daughter! 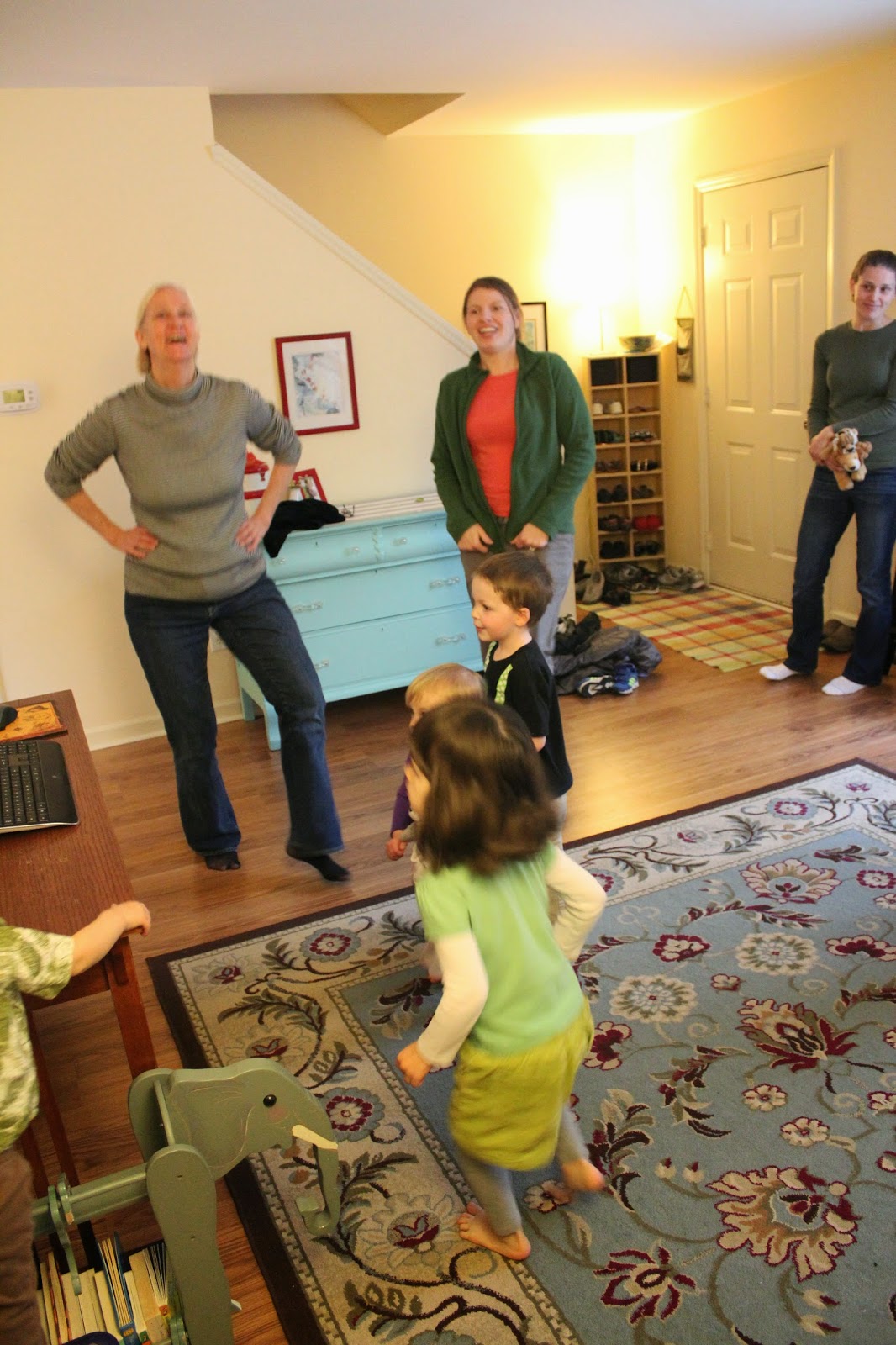 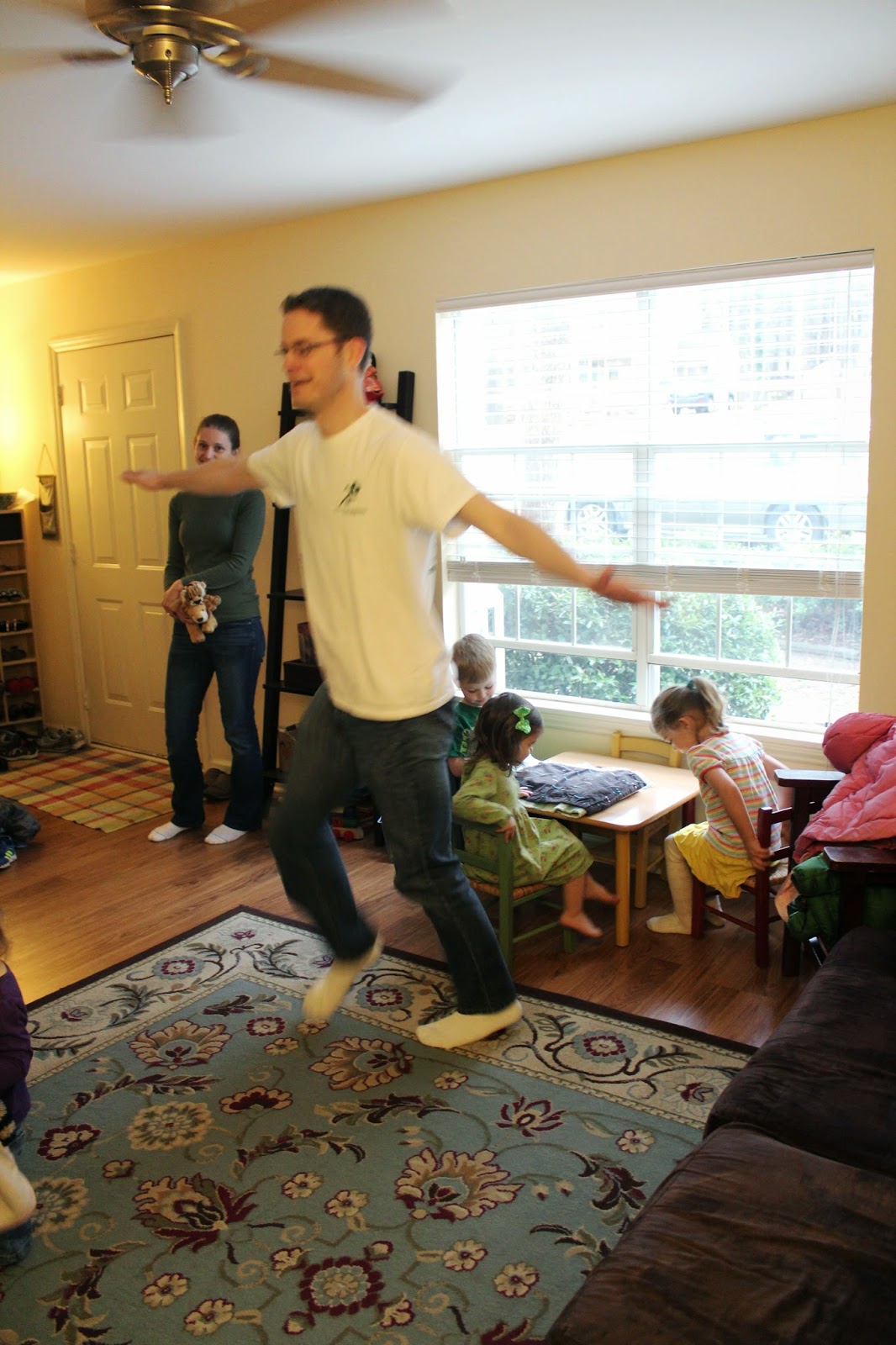