Last week we traveled to Austin, TX for my Grandpa Jack's memorial service (more photos to come!).  We arrived home from Texas on Saturday evening, and on Sunday was the Primary Sacrament Program that (as the Primary President) I have been praying and sweating over for the last few months.  I can't even tell you how many hours have gone into that one project - so many that when it ended I wasn't even sure if it had gone well or not.  Kind of like recognizing your own family's bad habits - it's just hard to see clearly from the inside out, once you become a thread in the tapestry.  And then in case life wasn't difficult enough, I decided to run our primary teacher training in two sessions immediately after the primary program.  It was a long, very full, and gratifying day. 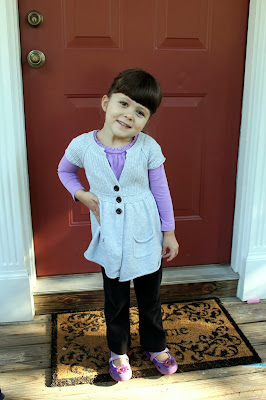 Which is why I was super grateful that my mom friends in our Preschool Coop were fine with waiting until this week to kick off preschool.  Here's Gigi, ready for her first day of school, which was Tuesday.  Can I tell you how excited I am about starting this up again?  It worked really well last year to have us rotate homes and take turns hostessing preschool one day a week, and this year we're upping the ante to two mornings a week for two hours.  It requires a bit more preparation on our part (the price we pay to keep things free) but it will be so worth it.

Last year Gigi was the youngest in the group at two and a half, and she had the hardest time sitting in her space for even a brief circle time.  It was torture (and not just for her).  Now, a year later, she just sat through her Tutu reading aloud her first chapter book and she has learned how to settle her body through circle time, easy peasy.  It's amazing what one year can do...  On top of that, last year our kids were at the level of A is for Apple, but this week my friend Kim did A is for Attribute, and taught about the 5 senses.  Can you see where I'm going with this?  Engaging with a few kids who are eager to learn, who can settle their bodies and grasp more complex concepts is fun! 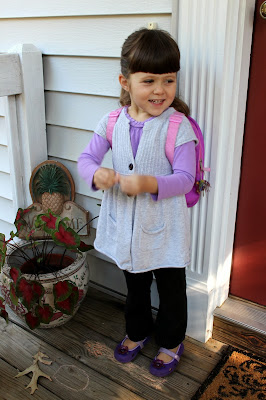 So that's our news for the week.  Gigi will also start back in with Kindermusik again on Saturday, which is the icing on the cake.  I love fall, and I love jumping back into a weekly rhythm and schedule.  We have learned the hard way that being frenetically busy does not do our family any favors, but having a few meaningful things on the agenda for the week helps us to move about engaged in life, like the hum of a bee.

And finally, a few of Gigi's hilarious creations.  With the fashion she adds to her characters, it looks like they could start a parade! 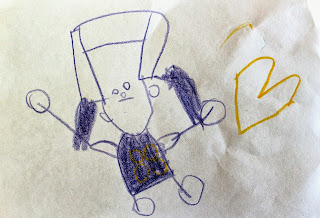 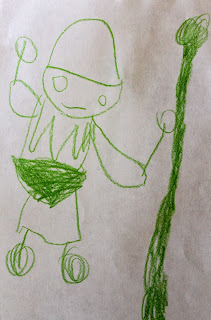 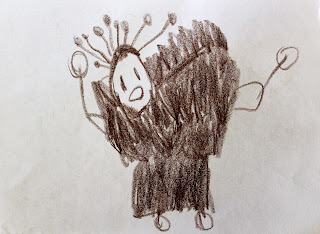 At first I read that wrong and thought that Gigi was reading aloud her first chapter book! My jaw definitely hit the floor!

She is such a cute little girl...she just shines. Congrats with the primary program!