Just want to catch a snapshot of now.  I'm behind on travel photos from the Mad Month of March, but it is a good time to catch up on what's going on in the day to day instead of just the wild adventures.

MARCOS is finishing up his first full year at UNC as a transfer student, with only one more to go.  In general, being a UNC student has been a very happy experience for him, with some really great profs, good friends, and a lot of work.  He is hoping to secure an internship for the summer, but we're still waiting to hear back.  Financially it would be a great move, but the internship would likely pull him away from Chapel Hill for a few months, so I'm trying not to think too hard about the likelihood that he would be away during the week.  Next week we celebrate our sixth wedding anniversary, and since he's terrible at keeping secrets, he already told me that he reserved our spots in a "Romance in Italy" cooking class at Sur La Table, and he just made my favorite guys in the world list.  (He was already number one, but it can't hurt to secure the status).

This is my favorite recent photo of Marcos, from our Washington DC trip: 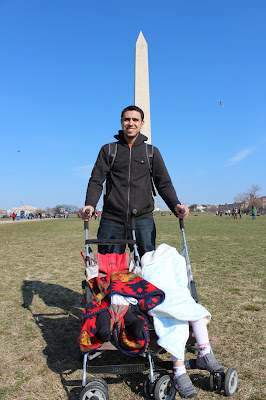 I am doing pretty darned well.  My volunteer coaching with Girls on the Run is wrapping up next week and our 5K is a week from today.  It's been a very positive experience, and I'm thinking about coaching again next fall because, honestly, being with those girls really makes me feel like I am in my groove - like I was born to teach and mentor young people.  In the parenting world I am sometimes in my groove, and sometimes very far away from my groove, but I can appreciate that raising these children is the most important work I will ever do.  Fortunately, we have a rich community around us.  These moms and these friends make difficult things communal, which lifts the load tremendously.

This might be my favorite recent photo of myself, from Easter Sunday: 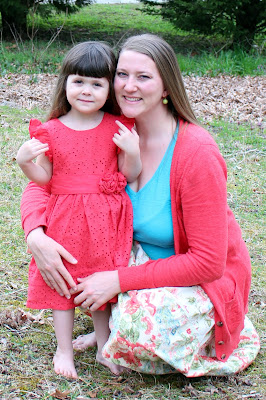 GIOVANNA is turning three years old this week.  Sometimes I am amazed that she is already three, and sometimes I feel like we passed three a long time ago, and we are probably on to six, or maybe sixteen.  She has been in the "why?" stage for a few months now, and I have to coach myself through the mantra, "This is a good problem to have.  This is a good problem to have" to keep from losing my mind when her questioning backs me into a padded cell.  She is inquisitive, and asks me to define words that I can't define, and she asks about things like death, and the government.  Gigi also loves to sing, and make up foreign words.  It's common to hear her say things like, "Pakako!  That is how they say 'pear' in Chinese".  Oh wow, Gigi, you really know your languages.  If anyone does anything nice for me she prompts me, "Mommy, what do you say?" and waits for me to thank so and so before she continues her business.  She likes play doh and painting, and her tea sets, and preschool and playing with new toys at her friend's houses.  Lately she has also been into play fighting, armor, swords and weapons, and capoeira.

Here is a recent conversation, as we were preparing dinner.  I took a new approach to the "why?" dilemma.

Here is my favorite recent photo of Gigi.  When I took the photo, I noticed that she was a splash of bright pink against some drab layers of late winter foliage, and it felt like a larger metaphor for the role she plays in our lives. 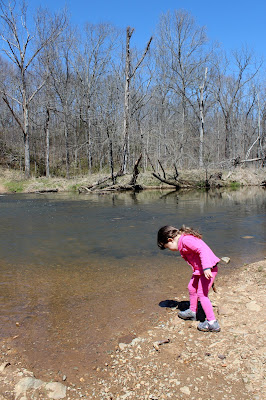 ORION just turned 5 months, and I think it is finally safe to say that he is colic-free!  He grew out of it around 4 months, but we were so paranoid about jinxing it that we didn't want to announce too early that we were past that chapter.  And what a chapter it was!  He has become a sweet, happy baby, and he loves to nurse, roll around, and laugh at his sister.  He is very strong, and I have this sinking feeling that we may be in for a real handfull, based on nearly everyone's feedback after they hold him that he is "a really wiggly baby".

Here is my favorite recent photo of Orion.  I think he's so beautiful: 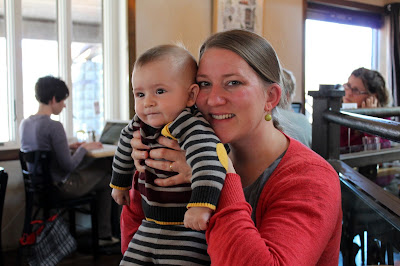 And that's that!  I'll try to get our Washington trip out next.
Posted by Metta at 12:32 AM

Beautiful pictures! That 'why' stage probably lasted at least a year with Luke and I think I could have exerted more patience if he listened to my answers at all! He really just wanted to keep the conversation going. Love the updates!