Gigi at "Two and a Half"

Tonight is Halloween Night.  Gigi had a preschool class party this morning with her little friends, for dinner Marcos' mom and sister made a warm yummy Brazilian meal and my mom came over, Marcos and I took Gigi to the Carrboro town fall festival for games after dinner, we went trick or treating with friends, and then after putting Gigi down, we celebrated Marcos' father's birthday with a cake and a beautiful slideshow that his mother had made.  It was a really nice day. 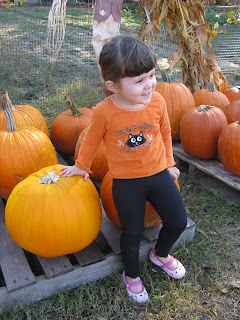 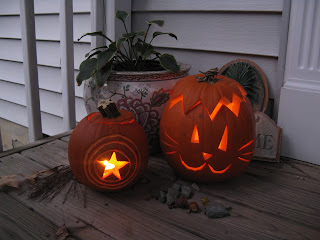 But to be frank, I'm a little overwhelmed.  I'm behind on posting photos from our field trips from the last few weeks, and after all this sugar tonight I'm being pummeled from the inside and don't have a lot of brain power to focus on an elaborate post (baby boy is still in there - only three days after due date so far!  Gigi was ten days over...  lawd have mercy...).

So, instead of telling you about fabulous farm tours and Marcos' fabulous sister Lizzy coming into town (yay!) I have decided to include the interview I've conducted with Gigi at two years old, or as she likes to tell people, "two and a half" years old.  In baby years, this is a huge difference.

***
M: Gigi, what is your favorite sport?
G: Jumping and hiking with my families.

M: If you could get on a plane and visit one place in the world where would you go?
G: To Brazil.
M: Ohhh....  Brazil.  What would you do there?
G: Speak Spanish.  And go on a trip.
(Uhhhmmm....  we'll work on that Spanish part.  We speak Portuguese with her.  Promise).

M: Gigi, what do you want to be when you get bigger?
G: A teenager!
M: Oh!  What do you want to be after you are a teenager?
G: A grown up!
M: (Trying to rephrase) Okay... when you're a grown up, you can choose a job.  Can you think of a job that sounds like fun?
G: I will draw a rabbit, like this, and a scale, like that, and a froggie.  And then I will go to the midwife.

M: Gigi, what is your favorite song?
G: *Starts singing "I love to see the Temple"*

M: Gigi, how do you feel about baby boy coming?
G: *Long pause* Happy!
M: Happy!  What will you do with baby boy when he comes?
G: I will share my toys with him.
M: That's a good idea.  What toys do you think he will like?
G: The cooking toys in my room.

And because I can't resist, here is a typical Gigi conversation from today.  I wish tiny children could write poetry.  Poetry for adults is strung together by the emotional connections we derive from life experiences that leave objects and feelings in closer proximity than logic would suggest.  Gigi has so few life experiences that one word for her will only pull up two or three files of connection she has stored in that brain of hers, and I feel like I'm constantly trying to figure out what connections she is making.  Check out how communication is with her nowadays:

*While talking about the Pyramids of Giza.  It is one of her favorite world landmarks, and the recent holiday festivities have exposed her to mummies, which of course lead back to the Pyramids...*

Oh, my! So entertaining!! I love those little language connections!

Speaking of new baby: Do you have a baby doll for Gigi to take care of and practice being gentle with while you take care of your baby? Always helped to have them doing the baby activities side by side with me.

Also, every time we had a new baby arrive, the baby came with a gift for the older siblings. (Yep, wrapped a little toy for them to open and packed it in my hospital bag.) They got it when they came to meet their new sibling... they always looked forward to it and made a positive association with having to make room for a sibling. :) Just some ideas... xxoo