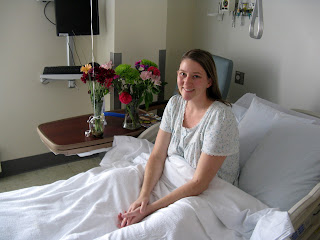 I wish this post were about our new lap dog, but it's not, it's about a new constellation of holes I have in my stomach where my recent laparoscopic cholecystectomy (removal of the gall bladder) left it's marks.  I will try not to go into an immense amount of detail, because it's painful to empathize with someone who feels like they are dying, but I'd like to record briefly the last couple of days.

To rewind a bit, I think it's important to say that I've had issues with my gall bladder for a little over a year.  Gall bladders do the important work - but not imperative work, as you shall see - of storing bile and releasing it when you eat food, which aids in the digestion process.  For fair skinned women who are of child-bearing years, it is not uncommon for us to develop stones in our gall bladder, which can be excruciatingly painful.  I have learned over the past year to manage my stones by eating better - less fatty foods, less sugar, and more controlled portions each meal.  I had never had a formal diagnosis of gall stones, but my impressive online education lead me to believe that because of the location and nature of my sporadic pain, there was no other reasonable explanation.

And that brings us up to date: last week Thursday, Friday and nearly all day Saturday I had terrible pain in my gall bladder (upper right portion of the abdomen).  This was alarming, since three days in a row of pain is highly uncommon, in my experience.  Plus, the pain was different than usual.  Last Saturday, instead of being intense and temporary, it stayed, and stayed and stayed and I just could not get comfortable in my body.  Finally I took two extra strength Tylenol, which took the edge off and allowed me to rest, but when the medicine wore off and I was back to feeling everything, the pain had moved to my entire abdomen and had intensified.  As it grew closer to midnight I became fairly certain that I was dying, and so I said my farewells to my beautiful sleeping daughter, Marcos rushed over to pick up my mom and brought her home to spend the night at our place, and Marcos drove me to the Emergency Room at UNC hospitals.

Fortunately, the ER at UNC was nothing like the show.  Midnight on Saturday night was actually very quiet, there were no dangling severed limbs in the waiting room, people wailing, or mass chaos, and after a relatively quick check-in process in a small space where I continued to heave the last dregs of foam from my body in privacy, I was put on a stretcher and wheeled in my delirium to a small curtained portion of a bigger waiting room, where I was given morphine - and finally started to feel human again.

Over the next few hours into the darkness of Sunday morning, I had extensive blood drawn for testing, and was pushed on my stretcher to the ultrasound technician, who spent over an hour with us examining my internal organs.  That was the testing I underwent, and other than that my main job was to help the nurses manage my pain, and wait until the Doctors had enough information to make The Diagnosis.

The ER is a really interesting place.  When I first arrived at midnight I was put in the curtained space next to a happy Latino family - a father (the patient) who was on the bed and clearly in some discomfort, as well as a mother and two teenaged children.  They seemed in good spirits.  Then a number of hours later, as my own pain had been managed and Marcos curled up in my stretcher asleep and I ran my fingers through his hair, my heart broke as I overhead the results come back from the father's testing, and the resident calmly and kindly break the news to the family that it looked like the father had cancer in the upper portion of his lung, and likely into his spinal cord as well.  There went all confidentiality, and the opportunity I had to be spared the sadness and heartbreak of being privy to a stranger's diagnosis.  The man heaved grown-man sobs, and my own nurse came in just at that moment to find me crying out of sadness for my neighbor.  His family held it together until he had been wheeled out for further testing, and then fell apart quietly in the room where we all waited.

After many visits from doctors, and residents, and nurses, the results were finally back and it was time for my diagnosis: Gall Stone Pancreatitis.  Yes, my gall stones had been the culprit, but the pancreas was the current problem.  Stones had fallen out of the gall bladder to obstruct the functioning of the pancreas, and my pancreas and liver functioning were wild.  Lipase levels up the wazoo.  Thousands of levels higher than they needed to be.  So what was the plan?  To wait it out.  Apparently, 85% of the time the stones move past the other organs on their own, and the organs resume normal functioning.  So Sunday and Monday were spent waiting, and waiting, and waiting.

I was moved on Sunday to the surgery floor, and lived for the next three days on a diet of ice chips.  To avoid triggering the gall bladder to release more bile, and perhaps more stones, I basically survived on an IV for three days straight.  The hunger and thirst went away after about one day, as did the satisfaction of sticking ice chips into my mouth.  I was entertained by terrible TV, the lovely nurses and nurses aids who took care of me, and the visits of friends and family, which kept me sane.

By Monday evening my blood results were back and they looked very promising - all of the offending organs had simmered down, and it was time to plot the removal of the gall bladder for the following morning.

Tuesday the 17th of April, I woke up, prettied myself, Marcos showed up around 9am, as well as my boss with flowers and a beautiful card from work friends, and at the last minute another friend from work arrived to do a final send-off into the OR.  I breathed deeply, and tried to stay calm, and was wheeled into a cold operating room with a dizzying assortment of gadgets.  A warning that my IV may sting in a second, five deep breaths into an oxygen mask, the sensation of falling through the floor and zonk. 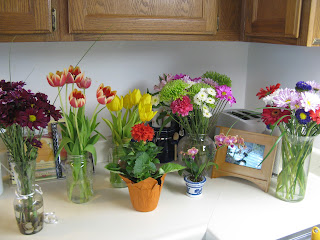 When I woke up, I felt like I had been run over by a semi.  A few times.  Nobody deserves to feel what it feels like coming out of general anesthesia after a surgery, because it's just terrible.  I've selectively forgotten those first few hours, but I learned that the surgery had gone well, my anatomy had been straight-forward enough for them to remove my gall bladder laparoscopically, and so I was left with four holes on my tummy, which were covered by a hardened glue, and my gall bladder had been pulled out of my belly button.  I didn't have the courage to look at those holes until much later that night when I was feeling like a person again.

That afternoon I continued to feel better, and take strong narcotic pain medications, and for the first time in three days I ate food.  It was delightful.  I ate jello first and eased into real food with a garden burger and salad for dinner, and another grilled chicken sandwich and sides for a late night snack, just because I could.  Our friends drove Gigi and my mom over to the hospital after feeding them dinner, and we were all together and the surgery was done, and successfully!  That night Gigi kissed mommy's tummy very softly, and I showed off my holes and peeked at them myself, and I was really feeling good.  In the evening our friend who works as a nurse on the floor stopped by when her shift ended, and we spent an hour talking and enjoying each other's company.  I went to bed that night happy, and relieved.

The next day was a nice slow process of getting ready to leave the hospital.  I was sad to leave that afternoon, but I had waited in the ER for a room to open for me, and knew there must be people much worse off who needed my bed.  After lunch my mom came to pick me up, while Gigi stayed with our sweet neighbor Ali and got her toenails painted and played with her buddy Boston.

While I waited in my wheelchair at the hospital doors for my mom to pull the car around from the parking deck, I had such mixed feelings about leaving the hospital.  Friends have been bringing over meals every day and we have been so well taken care of, but transitioning home is really hard.  I was used to my very soft bed at the hospital, and a nurse who would bring me my pain meds at the press of a button, and a quiet floor to take walks on in my peep show hospital gown in the late hours of the night, and nothing that I had to do.  At home Gigi wants my every attention, she wants my snuggles, and she wants me to hold her and lift her, and be her mom just like I was before.  I know it will be like that again soon, but I still flinch when she comes close, and put out my hands to protect my tummy, and can't smother her with the warmth of my mama bear hugs as I'd like to.

The good news is, each day at home has gotten better.  I'm sleeping downstairs on the airbed, and it's perfect.  Each morning I wake up feeling better and more mobile, and I hurt less.  I still feel exhausted and sleep for hours in the middle of the day, but Marcos and my mom have been working around that schedule, and I love them for their sacrifice, and for helping Gigi in so many ways.

Well this didn't end up being brief at all, but I want to end with a thank you to everyone for your well-wishes, and prayers, and the cuisine that comes from your kitchen to ours, and for the flowers and cookies, and groceries and for taking Gigi this past week!  When one woman goes out of commission it really take a village to keep things running in her life, and we have felt so humbled and grateful to have so much help in keeping our heads above water.  Thank you endlessly for your kindness.

Wow, that is crazy....and being pregnant on top of that. You go, girl. Way to get through pain and hard times. I am glad you are doing better.

That is really sad about that Latino family....

I totally understand the mixed appeal of the hospital for mommies sometimes. Get some rest and hang in there, Meta.

man, hang in there. sorry to hear all about that. good luck with recovery.