Today is little Gigi's 2nd Birthday, and we feel really lucky to be her parents. She is clever, and imaginative, and she is a little love magnet!

This year we barely got it together to have a little celebration for her, but I am so glad that we did. Our options for timing and location were very slim, and we ended up hosting an Easter Sunday brunch at our place followed up with an egg hunt in the park near our home. Our wonky afternoon church schedule allowed us to do a morning gathering, so we invited just a few of Gigi's little playmates and their families, and it was really nice. When I was dreading the event, and felt like I had absolutely no extra energy to put into hosting a party, it was helpful to remind myself of the adage I made up, that where good people and good food are combined, a good time will follow. 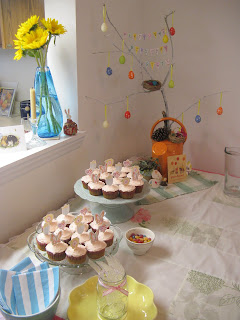 As long as we live in the Northern Hemisphere, April is just going to keep falling during the Spring, so I wasted no time digging out the tablecloth I had sewn for last year's party, and using leftover napkins, etc. New this year were our Easter carrot cupcakes with maple cream cheese frosting and cupcake toppers proudly purchased and ready to stick on top. Ta-da!  It was all about streamlined and simple. 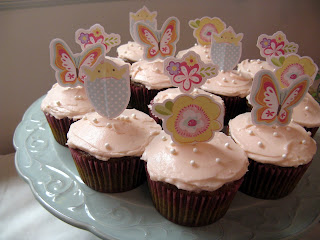 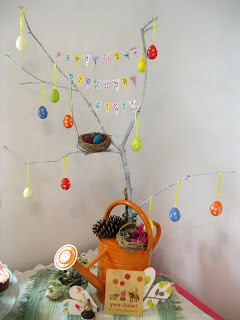 Since it was Easter Sunday, my mom made Gigi a beautiful Easter tree for the centerpiece on our brunch table. Each year I've had an idea at midnight the night before Gigi's party, and this year my midnight idea was a little banner for her Easter tree. "Happy 2nd Birthday Gigi!", completed about 1:30am. 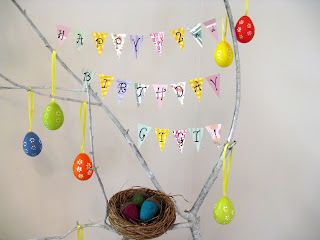 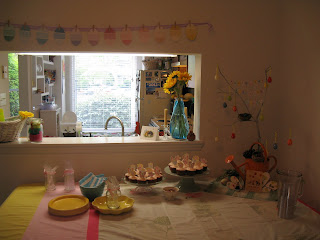 As our RSVPs creeped into the 20s, I realized that I would be most sane at the end of all this if I asked our friends to bring something to share. My mom and I made three quiches between us, and with breakfast sausage links, and tons of fruit, homemade croissant rolls, orange juice and of course the cupcakes for brunch-dessert, we ate like royalty. 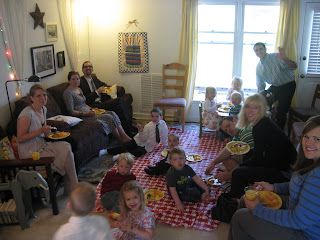 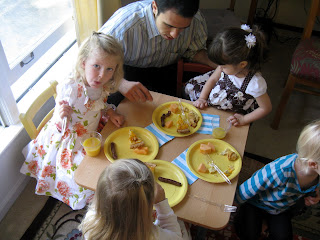 While I rounded up the kiddos for Ring Around the Roses and a hilarious version of Duck, Duck, Goose where all of the children stood up and ran in the circle, Marcos and Adam snuck out with the eggs and hid them in the small park just across the way from our home.  After giving the guys a few minutes of a head start, we took the kiddos out with their baskets and bags, and let them loose.  Watching children run into open grass gives me such a wholesome feeling. 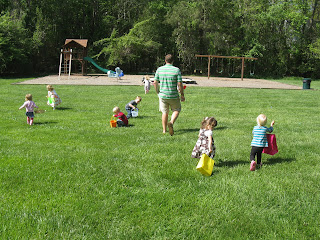 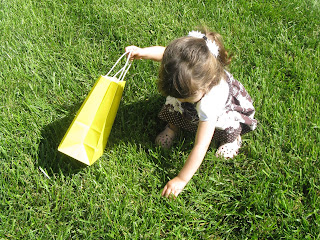 After witnessing an egg hunt the day before, I made some mental notes and made sure we had enough eggs for the more aggressive hunters, as well as the more pensive gatherers.  I agonized briefly while stuffing the eggs between using sweets or non-sweets, but in the end went with some of each: a few mini chocolates, gummies, and Trader Joe's gourmet jelly beans (yum!), but also goldfish crackers, craisins, kiddo bandaids, some small toys like bouncy balls and slinkies, stickers and monster finger puppets. 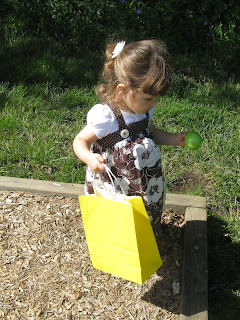 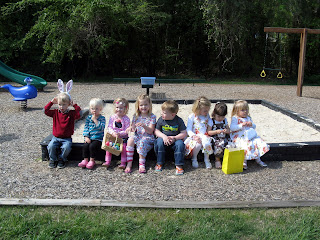 Above are Gigi's little friends after the egg hunt: Emerson, Livy, Ava, Becca, Henry, Layla, Gigi and Maya.  Clearly, Gigi is much more interested in checking out her loot than looking up for a photo.  Below, Tutu helps Gigi with her cupcake after we sang Happy Birthday to our little girl.  Someone had the brilliant idea of bringing the cupcakes outside, and my carpet is still thanking me for that one.  We had ice water and cupcakes to end our gathering, and the kiddos played for a few minutes at the park before heading home.  It was a stunning Easter morning, and we loved being outdoors with friends. 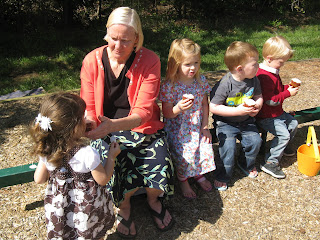 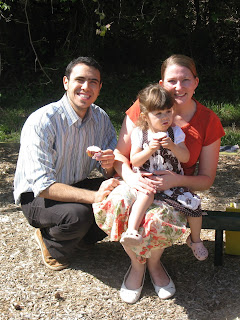 Happy Birthday Giovanna!  We think you're something special!
Posted by Metta at 11:00 PM

happpy bday gigi. looks like your parents put on a great day for you.

Happy Birthday to Gigi! I can't believe she is already two (although she seems precocious beyond her years if you ask me!). And I'm SO glad that you have "last minute midnight" ideas as well because I swear that is when all my great ideas come. If this is how you "throw" together a party then you are even more amazing that I originally thought.

Happy Birthday Gigi! What an incredible girl you are!

Lovely! Wish we were there to celebrate with Miss Gigi... can't believe she's 2! Something coming in the mail. ;) xoxo

Happy Birthday Gigi! Hopefully, someday we will be invited to your party!!

Gigi is such a lucky little lady to have such great parents! Happy Birthday, Gigi!! You are loved by many.