Now that six weeks have passed and I'm not as emotionally attached to all 750 of the photos I took over our holiday vacation, it's time to come back and enjoy a post or two about Hawaii!

So let's rewind. On the 24th of December we flew to Portland for a few days of family time at my Aunt's home for Christmas, and on the 27th we all flew together to the Big Island of Hawaii. At the beginning of last year I suggested to the family that we should make my Grandpa's 90th birthday a family celebration, and thanks to the generosity of my Grandpa and Uncle John, it actually happened! For the first time in way too long, all of my Grandpa's children, grandchildren and great-grandchildren were together in one place and it was so much fun.

O'ahu is a very happening place. The Big Island is less so. Here is our view from the airplane as we flew along the Hamakua coast into Hilo. 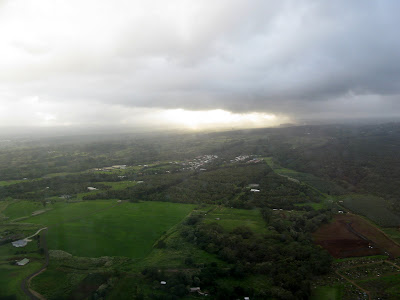 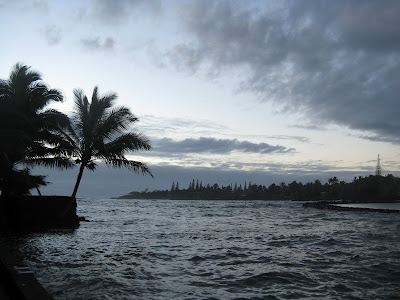 And here is Kapoho, the place where we stayed. Uncle John and Auntie Lani are exceptionally good people, and they attract good people to them. Some friends of their family own two beach cottages on the ocean, and we were lucky enough to stay there for the week that we were on the Big Island. The houses were very... what Lani called "beachy", but the location was a level of tropical paradise I'm not sure I've ever seen before. The photo above is the sunrise from the beach house, and the image below is the view from the end of the driveway. The neighbors across the street raise fish, hence the ponds. 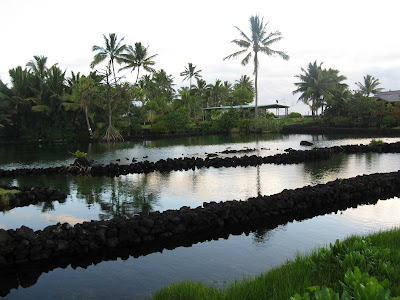 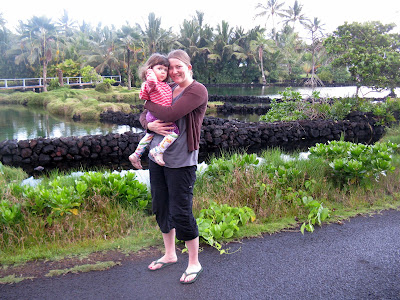 The Hawaiian Islands were formed when the earth's pacific plate moved over a hot spot which kept poking through the plate and creating new islands, so the chain of islands is the oldest at the top, and youngest at the bottom. The very youngest and southernmost island is the Big Island, and unlike O'ahu, which boasts gorgeous white beaches and more of a "Tropical Isles" Calendar look, the Big Island still has active volcanos, and is still largely made of black vocanic rock. In Kapoho in particular, the residents have taken cement and vocanic rock, and made up all kinds of rock wall formations to create ponds and rearrange the ocean water. It is really beautiful. 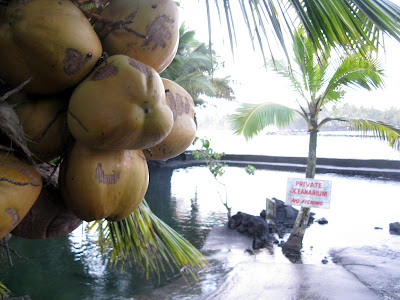 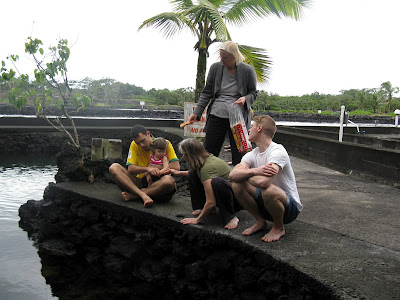 One of the best features of our little beach houses were the two ponds right off of our porch. With cement and vocanic rock, the family who owns the houses created a "Private Oceanarium" on one side where we could feed and admire the many tropical fish, and a swimming pond on the other. Although the tops of the walls were all solid cement and easy to walk along, the walls themselves were made of porous vocanic rocks, with plenty of cracks for water to pass through, so our little ponds rose and fell each day with the tides! What's more, baby fish can also pass through the rocks and grow up inside the peaceful ponds, and so each side has a collection of resident fish that we could either feed, or swim with. In the photo below, the cute fish at the bottom of the photo is the Hawaii state fish - the Humuhumunukunukuapua'a. Guess how fun it was to teach that word to Gigi! 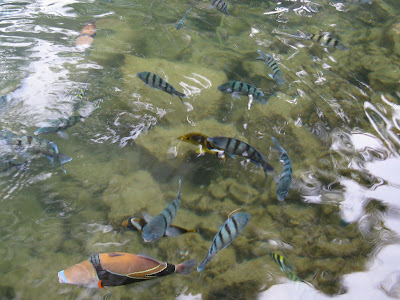 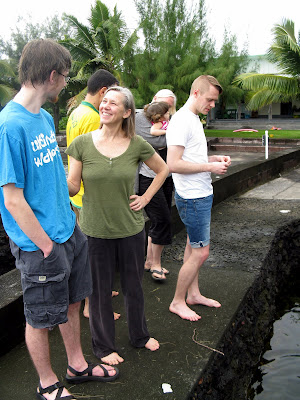 Above, my Auntie Katy talks with cousin Sam, and cousin Jordan feeds the fish. They all (with Uncle Don) slept in one little cottage, and we slept in the other. They made such great neighbors for that week in Kapoho, and we really enjoyed our outings and especially down time with their family. 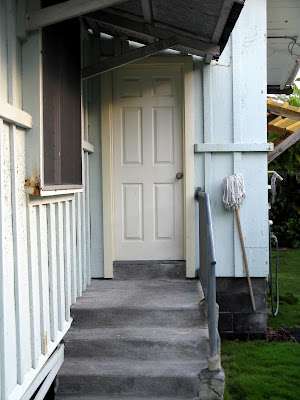 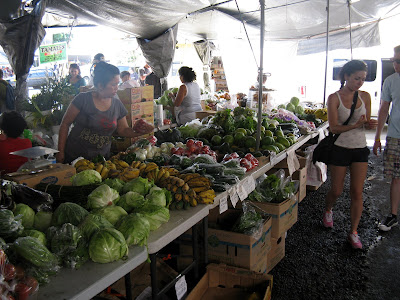 Possibly the most popular attraction in Hilo is the Farmer's Market. We went to buy produce and other groceries to stock the kitchen in our cottage, but it was impossible to pass up the many foods they were selling. Marcos got his fix of spam musubi, Katy and I were more for the lilikoi (passion fruit) lemonade and sweet Thai sticky rice with taro steamed in banana leaves (below), and Jordan had fresh coconut water straight from the fruit with a straw. Soooo ono! 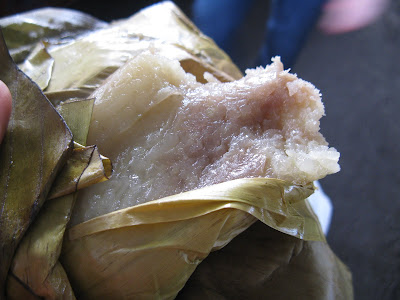 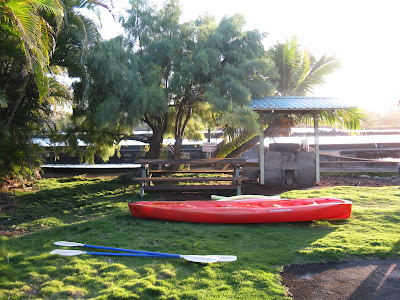 Here is the edge of our cottage, with the patch of grass and the ponds in the background. Below, Gigi and Marcos take a dip in the swimming pond. 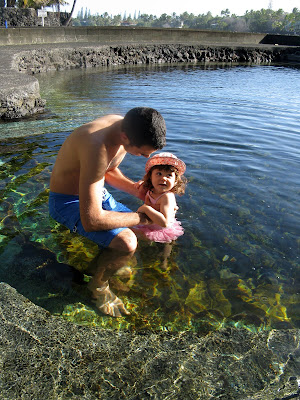 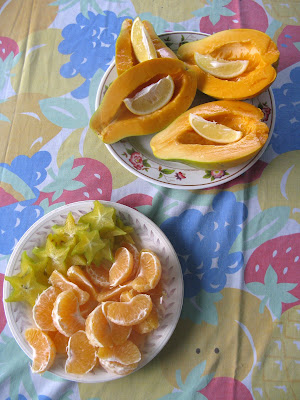 Every morning was a tropical treat. John and Lani and Grandpa were not able to join us every day because they live 40 minutes from where we stayed and they had work schedules to navigate, but they had gone far out of their way to provide us with flats of the best papayas known to man, and set up the cottages so nicely for our stay. Gigi learned to love most of the breakfast fruits... 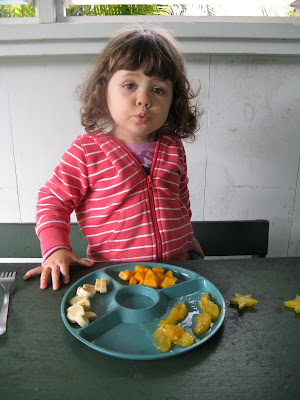 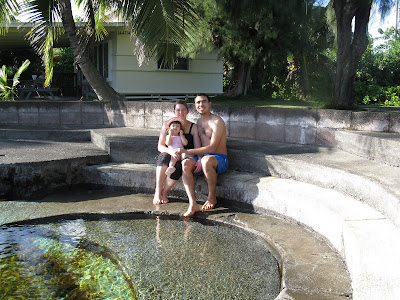 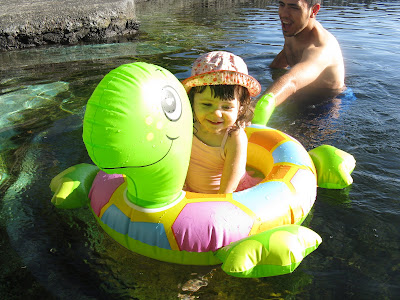 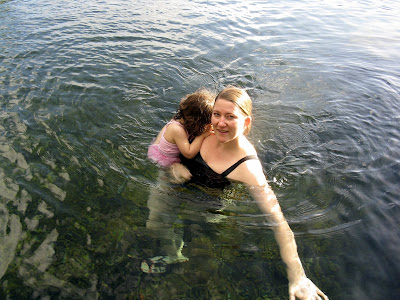 Gigi and I swimming in the pond. Because of the rock walls the ponds were very calm, and my favorite thing to do was to hang out with the snorkle and float around admiring the fish we were swimming with. 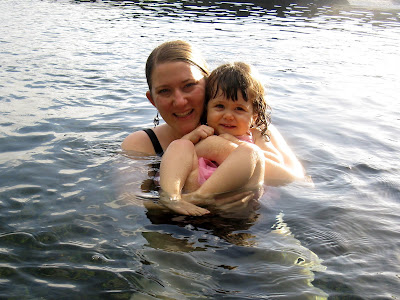 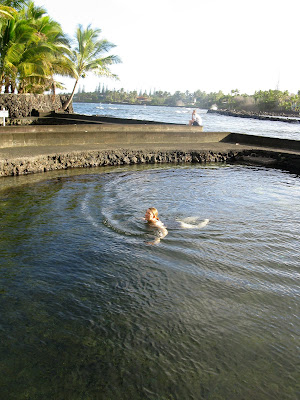 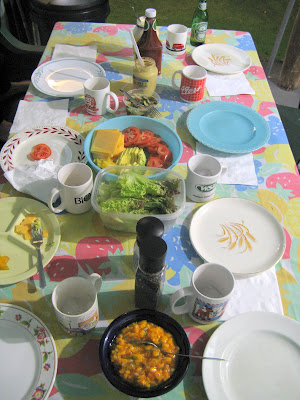 And then there were the dinners together with the Portland contingency. This night was grilling burgers night (papaya salsa? yes please!). I know the quality of these photos leaves something to be desired, but I am so glad I captured a few shots of what most of our time looked like. Happy Sam, Jordan and Katy eating great food... 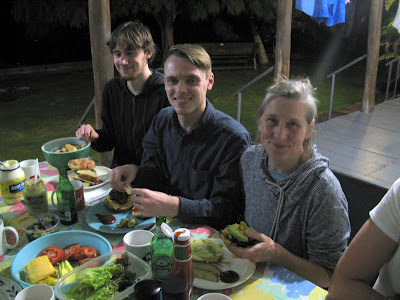 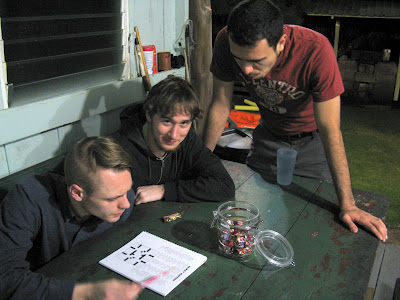 ...doing crossword puzzles throughout the day and for hours into the night, and playing scrabble with the girls. So fun! And those crossword puzzles... oh my gosh. Uncle Don had just received three books of crossword puzzles for Christmas, and he was kind enough to let us devour one of the books, little by little, every day that week. Jordan is in a Ph.D. program at Princeton and is, in general, quite the brainiac, and so with him at the helm and Sam, my mom, me and Marcos contributing the answers that fell into our realms of knowledge, it was a regular party. Katy and Don could have done them solo with their eyes closed. Super nerd fun. 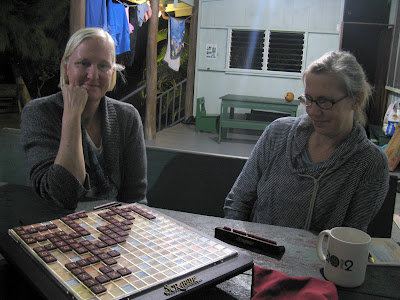 And whew! We made it through the first bit of the trip. Next in line: Grandpa Randy's 90th birthday party!
Posted by Metta at 10:55 PM

Metta! These pictures are so pretty! Its so wonderful to see you all enjoying Hawaii together. Its such an important part of who you are and it really comes out when I get to see you there! I hope we get to see more of the 750 photos!!! I'll be keeping an eye out. :)

It sounds like you had such a wonderful trip!

Will you invite us to Hawaii next time when you go? Your trip sounds amazing.