By Small and Simple Things

At the beginning of September, I caught wind of a free weekly mom and kiddo music class and thought, "Gigi loves music and dancing. She'll really enjoy this". We showed up the first week, and instead of enjoying the songs, rhymes, movement and story time, Gigi wandered around the room, swinging her arms at the other kids, mashing in the buttons on the CD player, hollering when I tried to reign her in, and generally being a massive disaster. I couldn't believe it: I was The Naughty Kid's mom. I left the class that day absolutely mortified, and pretty sure we were never going back, or at least not until Gigi was twenty years old and had learned how to sit still.

And then, by a stroke of divine intervention, I attended Women's Day on the Saturday of that week, and just happened to be in the same group at the same table with the exact woman who was the head of the music class. In case she recognized me, I decided to get it over with first and apologize about Gigi's behavior. Surprisingly, she brushed it off and said that there were plenty of kids who were wandering around, and that they all started out that way, and that in a few weeks I would be surprised at how much better Gigi would sit during the classes and that I should not stop coming. It was exactly what I needed to hear. We haven't made it every week, but when we go, we always take a receiving blanket to put on the ground so that Gigi knows where her space is. She still wanders, but when I remind her of the rule and bring her back to her blanket, she doesn't melt down anymore, she simply sits until she forgets the rule and gets up to wander again. I have also been using a washcloth to mark her space when we do Family Home Evening lessons at home and at friend's homes, and when we do music time at home. She is just little and requires a visual reminder of where she is expected to be. At times I feel tempted to throw in the towel (no pun intended) because everything at moments feels very fruitless, but I've continued to use this system because it's important to us that she learns how to sit still for short amounts of time.

To bring the story full-circle, today in the hall at church I passed the woman who had just left Gigi's nursery room where she had taught the littlest ones a short lesson. She said, "Gigi was so engaged, and she did so well staying on her carpet square!". I wanted to throw my arms around her neck! My Gigi, was engaged and stayed on her carpet square? Yeeessssss! Maybe all of the corralling over the past few months has finally paid off.

And the second miracle of the day? After telling Gigi every night for the past five months to say "ahhhh" when I brush her teeth, tonight she said "ahhhh" for the very first time, and I was able to brush her teeth quickly and effectively. After five months of daily requests, she finally pulled through. It was amazing.

I guess all this is to say that I am learning in parenting that by small and simple things, repeated very often and with more than a small measure of patience, great things DO come to pass. If it is important to me - whether it is healthy eating, or good bedtime habits, or enforcing consequences for my child's bad behavior - it is worth sticking it out. Because no matter what we tell ourselves, our kids are not going to wake up one day wanting to eat healthy foods, sit still all on their own, and mind their parents if they have been taught nothing but the opposite.

And if you do know any kids like that, I'd like to adopt them. All of them. 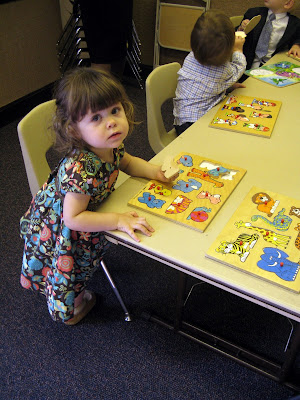 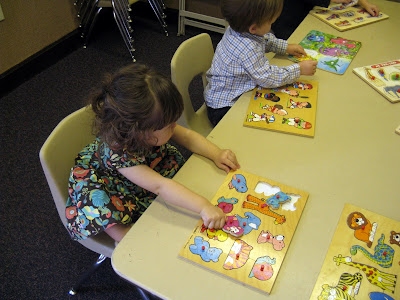 This is Gigi today at nursery. It wasn't her first week, but she has only been a hand-full of times. After sitting in Sacrament meeting as a family for an hour and ten minutes (Gigi is finally getting better at that too, thank goodness), at 18 months Gigi can finally join the nursery while us parents shuffle off to Sunday School and the third hour class. Gigi's nursery class of 8 or so kiddos is mainly boys, and one is a hair-puller. Sigh. He's sweet, but his hand has a magnetic attraction to her curls. The little ones do puzzles together, head to the gym for playtime, come back to the room for snack time, have a *short* lesson, activity and music time, and then clean up and do bubbles until the parents arrive. For the first few weeks Gigi was all over the friends, food and play time, and barely looked back as she sprinted to the nursery room, but now she has picked up that we're gone from her for a looong time, and so she has some ambivalence towards nursery. She had some sad moments today, but the sweet leaders were unphased by her crying, and were good at redirecting her to something interesting. Luckily, all of the doors have little windows, so I am able to duck out of my classes and come peek in on her. Some day she will love this time in nursery... 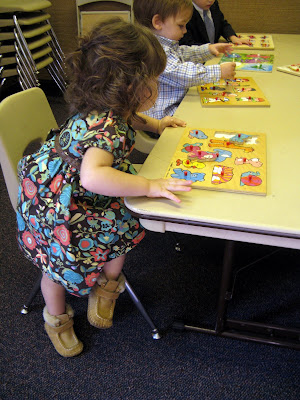 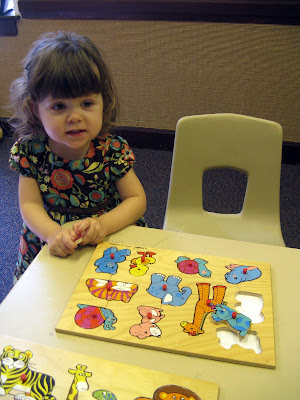 ...maybe as much as she loves running around outside after church. 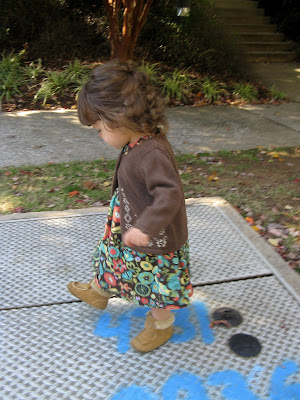 I promise I read your whole entire posts but the first thing I can think of is that Gigi has the best hair I've ever seen on anyone and second that I want her exact boots in my size.

The second things I can think of is that Enzo had to eat 1 bite of kale today and he didn't want it so he kept the one bite in his mouth for over 10 minutes until he finally gave in. Parenting is so bizarre. It's also weird what we care about. For example, I really care about being polite and and recognizing other people. So for example, when someone, anyone, come in our house I want Enzo to stop what he's doing and say "hi." This is super basic right? Well for him it's very hard. He's shy and pretty anti-social. Christian is the same way. I often have to remind Christian that he too needs to say "hi" to people when they come over. Maria is the total opposite, she runs to whoever it is and says "hi" about a hundred times and then says "abaracoes e beijinhos" "kissed and hugs."