I'm forcing myself to sit down tonight and post on this sweet blog of mine. Gigi turned 18 months old an entire 6 days ago, and October has been such a whirlwind of fall festivities that I literally have not had time to sit down and give you overly-detailed run-downs on the multiple facets of Giovanna's development. I'm sure my lack of blogging keeps you up at night. But just so you know, we have been busy with very serious and important things. 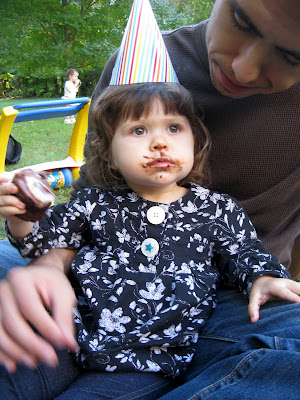 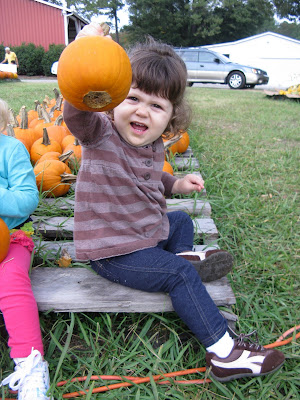 Where to start? Last time I covered Gigi's physical development, and then realized the next day that I completely forgot to mention the part that I really find most fascinating: her own awareness of her physical needs. Like, isn't it slightly amazing that Gigi can now tell me when she's hungry, when she is tired, when she feels pain, when she needs help, and most recently, when she is going to go "poo-poo"? I like surprises, but taking the guessing out of this game has really been great. There are, of course, still moments when she wakes up in the middle of the night and we feel lost about what to do for her, but this whole talking thing is really dreamy.

And speaking of talking, Gigi is solidly moving and shaking in that area. When she was 16 months old I was trying to stay awake on the bus one day, so I wrote down a list of all of the words she knew and used regularly in context. At that time I came up with a list of about 40 or so words in English and about 20 in Portuguese, and I'd say that her vocabulary has probably doubled since then. When I think about the thousands of words we adults use on a daily basis, her little vocabulary doesn't seem like much, but I have to remind myself that kaukau ("food" in Hawaiian), poo poo, owie, ajuda ("help" in Portuguese) and night night are only five words, but they open up entire worlds of communication. I've watched in awe as she has ventured into three-syllable words, and now into four-syllable words. My personal favorite, hands-down, is when she attempts "helicopter". Marcos' favorites are when she says "Papai", "bochecha" (cheek), and "batata" (potato). And above all else, I find it remarkable how brave she is: when we tell her to "say ____ ", she always gives it a whirl, no matter how completely she mangles the word.

And I think that's where we'll end today! I was hoping to finish up the saga tonight, but I'd still like to talk about her social life and personality, so we'll pick up next time right HERE.
Posted by Metta at 11:11 PM