Gigi is nine months old, which means that she has now lived outside of my body for as long as she lived on the inside. I'm sure that the adjustment was hard for her, but it sure is swell for us getting to know her and watching her grow and learn. 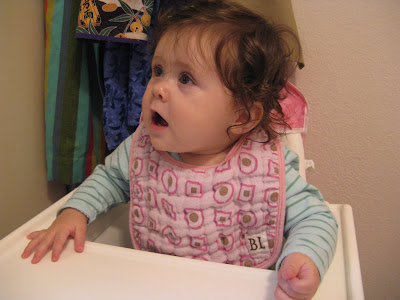 Things that are new this month:
In general, Giovanna is curious, content, happy to explore and socialize, and quite talkative.

Finally, during our 9-month check up today, Dr. Goldbach gave us her stats. At nine months Gigi is 19 lbs. 10 oz., 28 inches long, and is in the 65 percentile for height, weight and head size. Her percentiles started in the 90s when she was born, so she has been steadily averaging out. I was a little sad today that our baby is no longer a whopper, but with her soft chubby cheeks and thighs, who could be upset?
Posted by Metta at 1:44 AM