You may have noticed that this post takes us back to Munich, Germany, which is where our European adventure started. Yes folks, it's true, we've come full circle and this will be the last post on the European vacation! The 3.5 week trip we took in September required over 3.5 months for me to write about, but it's finally over. I had intended to journal about the adventure as it took place, but that never quite happened, so I thank you kindly for being patient as I have relived the journey through our photos. I realize that this blog is much, much, much more useful to me than to you, so I appreciate all of your laughs and sighs and your endearing patience with me and my writing about the thing I call my life.

The final chapter of our trip was the train ride up through Switzerland and back to Munich, Germany where we had started. You geography buffs know that Munich is the main city in the region of Southern Germany called Bavaria, and what is happening at the end of September in Bavaria? Oktoberfest... 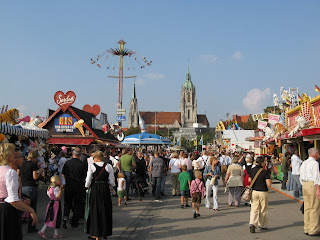 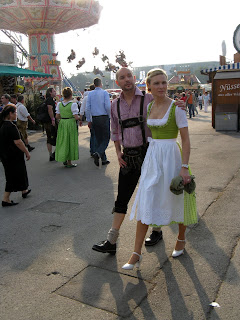 Our planning for the Great European Adventure originally had nothing to do with Oktoberfest. Like you, I just assumed it was in October, and so our end-of-September departure date didn't even make me flinch. But apparently the festivities are too good not to share with another month, and by the last week in September, Oktoberfest was alive and well. We were very excited to check it out. This was the real deal.

For a married Mormon couple, Oktoberfest doesn't hold the same appeal as for the other globs of tourists who filled the tables, and we were happy to see that most of the field was covered with more of a family-friendly carnival than beer tents. The carnival had all of the games and rides we were used to seeing at any carnival in America, but the garb was a million times more interesting. Most of the Germans present were wearing traditional Lederhosen (the leather pants with suspenders) and Dirndle (the ladies dresses, such as the one above). It is a great look, and it was everywhere! 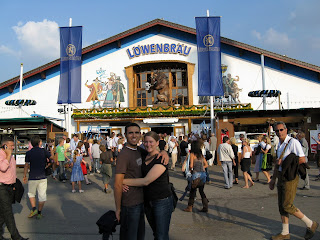 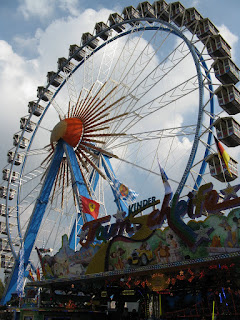 After winding our way down the rows of ferris wheels, dart games, and spinning teacup rides, we went to check out the beer tents. The tents were a little too smoky for my pregnant body to handle for very long, but it was basically endless rows of tables, Lederhosen, and a raised platform in the middle with an oompa loompa band belting out drinking songs for the group to enjoy and sing along to. Even my exchange brothers from high school, who have no problem participating in the drinking aspect of Oktoberfest, said that it's not a lovely place to be when it gets dark. We left around 6pm, and even by then, people who had been drinking all afternoon were starting to stumble out of the tents completely smashed and unable to walk or talk. Notsoattractive. 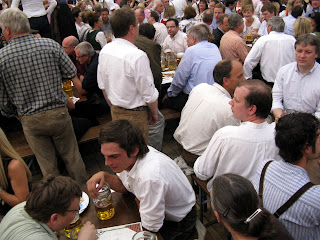 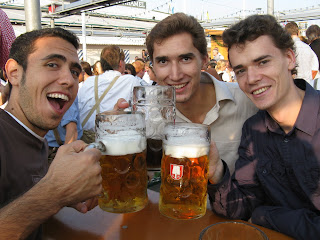 We found a table outside, which filled quickly with people from other countries. Marcos and I ordered the Spezi, a mix of Coca Cola and orange soda. Yum! 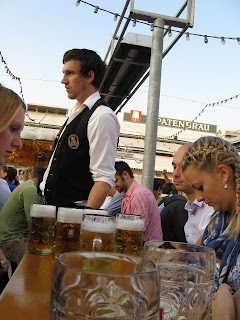 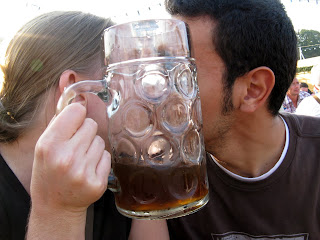 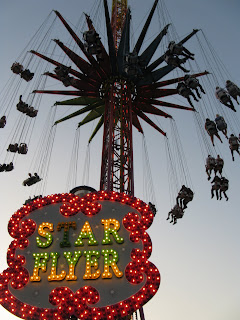 To top off the night, we decided to spend our ride money on the only ride that looked decently safe and fun to me at the time: the Star Flyer. WHY it looked safe and fun to me I still have not figured out. You may recognize these photos from a post I did a few months back called The Worst Five Minutes of my Recent Life. Just to give you an idea. 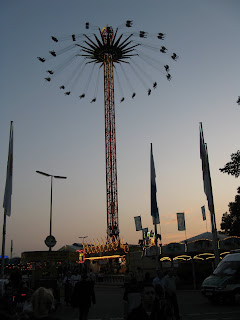 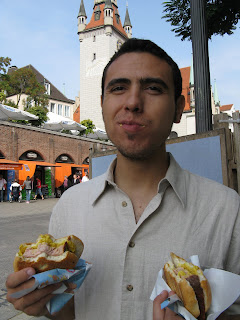 And finally, here is Marcos eating his favorite new German food: Leberkaese ("liver cheese", neither of which are in the sandwich). Fresh bread rolls, mustard and a slab of some kind of mystery meat... yuuummmmm...

Thank you Germany and Austria and France and Italy and Switzerland for giving us a thousand new memories, a thousand new loves, and a thousand reasons to return!
Posted by Metta at 12:03 AM

I have loved your Europe posts! So fun to remember my time there!