Every year for the past three years, our Saturday after Thanksgiving has been reserved for New York City. Being in The City is one of the highlights of our trip up to New Jersey for the Thanksgiving holiday. 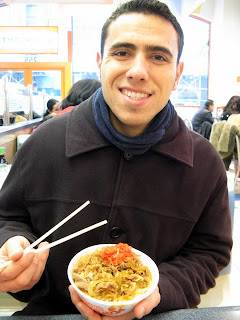 Our first stop after getting off at Penn Station was Yoshinoya near Time's Square where we bought beef bowls for lunch. That pickled red ginger took me right back to Tokyo... yum! Before uploading these photos I actually went back and looked at last year's NYC post, because we ate here last year, and I was almost sure that we had the exact same clothes on too. 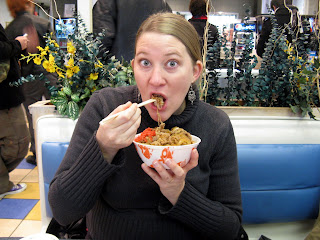 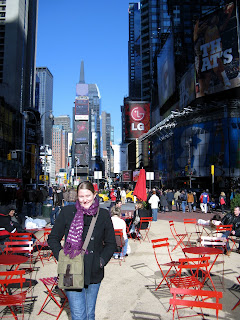 Time's Square. The bright sun warmed up everything, and there seemed to be more pedestrian zones around the square than in the past. But what a zoo! Looking at the city through my future-mother eyes, I have a whole new respect for people who live in this city with young families! 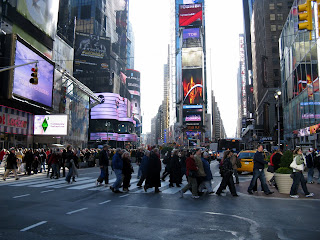 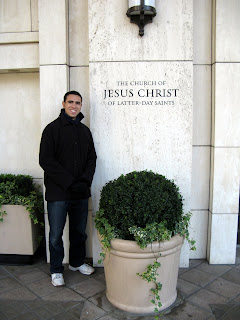 This year we wanted to see some things that we hadn't seen in previous years, and so we headed straight up 8th from Penn Station and found the LDS Manhattan, New York Temple. We didn't do much more than take pictures in the lobby and outside the building, but how exciting to have a Temple in such a great location! 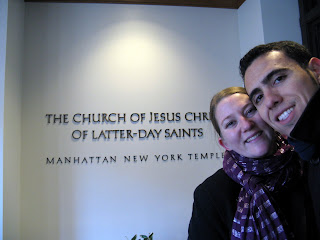 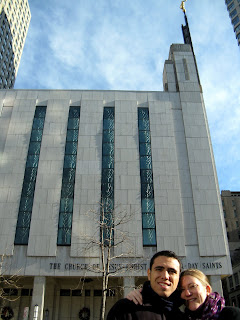 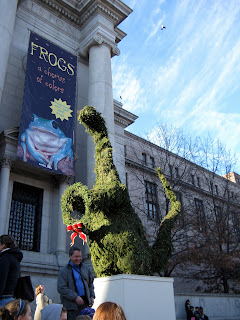 Our other new exploration of the day was the American Museum of Natural History, which was also on the West side of Central Park, just a jog up from the Temple. Amazing, amazing, wish you were there, but honestly, this is where the day started to turn foul. My body decided to act like a pregnant body all of a sudden, and my usual short museum-attention-span was greatly reduced by pain and aching in every. single. joint. The displays were great, and hooray for skilled taxidermy, but we were both under the impression from Night At The Museum that the museum would be more hands-on. There was a lot of walking and standing and reading involved, and my body started to hurt really, really badly. 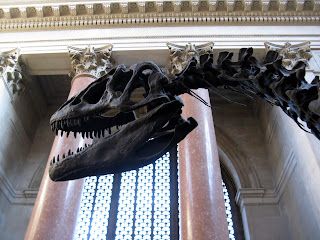 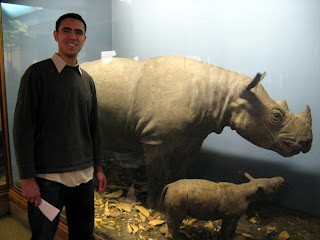 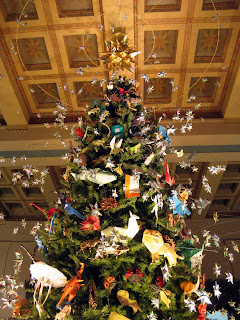 Is it lame that my absolutely favorite part of the museum was the Christmas tree? The tree was packed with huge, colorful origami animals, and they were so, so, so beautiful! I also loved some of the displays, such as the one below. 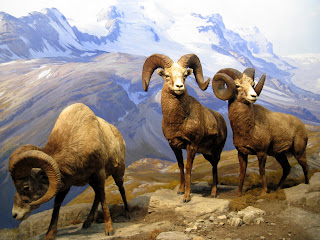 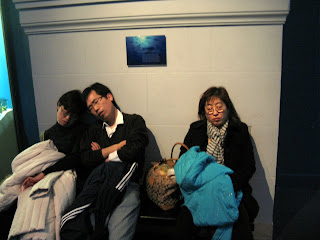 Three people who looked exactly like I felt. They probably had jet lag as an excuse, but they weren't the only ones we saw sleeping in the museum. It is simply exhausting to stand and read for hours on end without much to do with your hands and mind.

Marcos' favorite part of the museum were the dinosaurs and the Hall of Biodiversity. We were also fascinated by the elephant seals, and their mind-blowing underwater talents. Maybe it's just on the mind lately, but learning about the gestation period for various animals as well as the fat content of animal mother's milk was really interesting. For example, did you know that seal mother's milk is 50% fat so that the babies will survive the cold and chunk up really quickly? 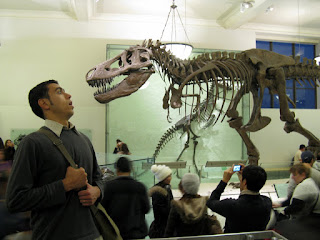 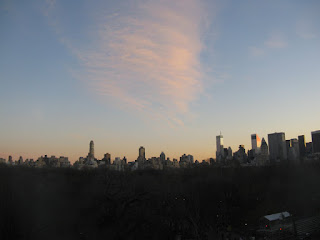 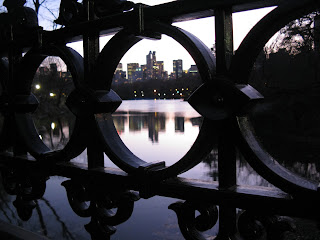 At dusk we strolled through Central Park and ended the evening with hot cocoa at Rockefeller Center. New York City, thank you for your years of hospitality and kind treatment, romantic mood lighting and entertainment. We hope to see you next year, but if this time around was difficult for me, I'm not sure what having a 7-month old will do for us in a year from now. Let's just say we'll keep you posted... 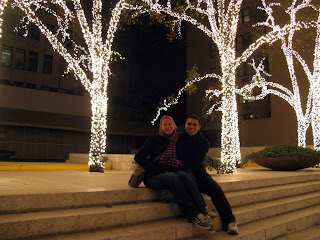 You guys are so cute! I love your pictures. I'm hoping we can visit NYC sometime soon. When we did similar trips when I was pregnant, I would get a wheelchair. SO EMBARRASSING! But I had to give in, it was way too painful to walk that much. I know its funny when people congratulate you for completing day-to-day tasks when your pregnant, but really even walking deserves a pat on the back sometimes!

At first I was so sad that I didn't get to see you while you were here, then I realized we were still in ct. But we have to play if you come again! Deal? I think I would die of happiness if I got to see you again in real life! So glad you had fun!

i often find sight-seeing in nyc exhausting (pregnant or not). that christmas tree does look awesome.

You guys are so cute. And I love all your travel pics. It's so neat you can travel together.

What a fun trip! The picture of Marcos staring in the face of the dino is especially great!