The Secret to Raising Smart Kids

Head's up: I'll try to keep this short, but I may not be successful. I'm here to tell you about something I'm researching right now, which I think may just change your life. 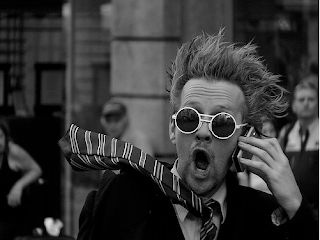 "Fixed" mindset vs. "growth" mindset. It all started with Carol S. Dweck from Stanford University, and most of what I will write has come from her years and years of thinking, questioning, research, and writing.

The crux of Carol's pursuit was originally to figure out what motivated people to do things, or more specifically, to continue doing things that were difficult. Over many years of observing student behavior, she developed the concept of "mindset", and generally classified student's mindset into two categories: fixed or growth-oriented.

Kids with a "fixed" mindset believe that intelligence is an innate characteristic - something you are either born with... or not. Generally, kids with a fixed mindset are keen on being seen as smart, and will avoid difficult tasks they are not confident they can accomplish, for fear of losing that belief about themselves. Kids with a fixed mindset can whiz through the early grades with little effort (if they are the "smart" ones), but they struggle in junior high when academia becomes more challenging. Kids with a fixed mindset do not take constructive criticism well, are more defensive of their failures (because failure means they are no longer "smart") and are quicker to give up when the going gets tough.

On the other hand, kids with a "growth" mindset see learning as something that develops with hard work and effort. Generally, kids with a growth mindset understand that you can make your brain smarter by using it often, and that you can improve on a task through practice. Kids with a growth mindset endure longer in difficult tasks, and are not threatened or frozen by failure, but accept challenges as a chance to learn new things.

(Interestingly, Carol Dweck also writes about adults - imagine a supervisor who doesn't take constructive criticism well, hesitates to give advice and will not act as a mentor for anyone. He or she most likely has a fixed intelligence mindset, whereas someone who mentors others, and accepts and gives advice freely is more likely of a growth mindset).

So cut to the chase, Metta! What is the Secret to Raising Smart Kids?

According to Carol Dweck, the secret is to stop telling them that they are smart. The language that we use to interact with others tells them how we think about intelligence, and kiddos are especially likely to adopt our modes of thinking. When we only tell kids how smart they are, their expectation is that smart means they should succeed in everything. When something difficult comes along, they are either more likely to disengage in order to protect themselves, or they are in for an earth-shattering reality check - that they will sometimes fail and are not "smart" after all. Although "You are so smart!" is a natural thing for us to say to children, according to Carol Dweck, three decades of research has shown that there are more helpful ways to be encouraging. Praising the process rather than innate characteristics is a better way to promote stick-to-itiveness, patience with difficult tasks, creativity in problem solving, not to mention a healthy relationship with failure, learning and recovery from set-backs.

(For a more detailed look into examples of useful praise, click here for an entry I wrote back in December on the topic, into which I unknowingly incorporated a lot of Dweck's ideas).

Interestingly, Dweck is currently in the process of creating a school intervention called "Brainology", which focuses on the growth mindset and teaches children explicitly about the synapses in the brain, and how those connections are changed and "made smarter" through practice. Even in its pilot stages, teachers reported that students who were exposed to Brainology approached their learning in a new way, endured longer, did better in their academics, and understood that their effort was changing and improving their brains.

So along with praising determination, appropriate ways of dealing with frustration, and creativity in problem solving (instead of labeling only end products or "smartness" in communication with your little ones), try telling them in simple terms about the way brains work. If kiddos understand that they have control over their intelligence and that practice will literally make new connections in their brains, over time you may just see some real changes in the way they approach learning and the scary threat of failure. 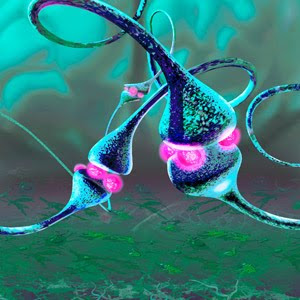 Chemicals firing across the synaptic gap... "smart" kids in the works.
Posted by Metta at 6:33 PM

Those are exactly the conclusions I came to after years of reflecting on the academic experiences of my siblings and myself. I decided I would avoid telling my kids they were smart, praising the effort instead. Being told you're smart all the time is a disservice and sets you up for failure. But if the early years of school are so easy, how does a child learn to work hard so that high school doesn't come as a shock (as it did for me)?