"Dear Judy, thank you for rejecting me..."

I just received a rejection email from an agency called Clean Energy Durham. I had applied for their Transit Specialist position, and okay, so maybe it wasn't the job I really really wanted, but at least it sounded interesting.

One of the job requirements was: "Must be able to ride a bike". 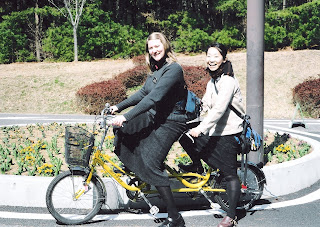 But calm down, I haven't even shared the best part: Judy, the Executive Director of the agency, actually emailed me with a rejection letter. I felt so good inside. I immediately wrote her back, thanking her for sending me a rejection letter. Maybe you think I'm being facetious, but I'm not. At this time, in this economic climate, sending electronic applications out into the world feels somewhat like throwing frisbees off a cliff in the middle of a very dark night. Who knows if anyone reads them? Who knows if they are virtually shredded before they make it to anyone's inbox? At least being rejected confirms that this job search may not be just a big fat waste of time. And... at least someone else has a new job.
Posted by Metta at 11:05 PM