Men in the Kitchen (aka how to please women)

Last weekend I was busy doing a trillion things, and with two potlucks and minimal time, I recruited Marcos' help with the food prep. Lately I have been staying current with a foodie blog that my friend Damaris owns, and I have been raving about how some of her photography looks so delicious that I want to nibble at the monitor.

Now, if you know Marcos, you know that he is a very conscientious man. Since we have been married, he has worked hard to develop an eye for design, fashion, and a knack for cooking. It tickles me to have him participate and try to care about the traditionally "feminine" things, even if some of his ideas make me wince. I have to hand it to him: I have put in much less effort to be brilliant in areas that he excels in, such as computers.

To put these thoughts together: here is Marcos' work in the kitchen while I was gone. As a tribute to his awesome Aztec Couscous salad and his idea to take a picture of his process, here is a photo of his work, which he appropriately labeled. 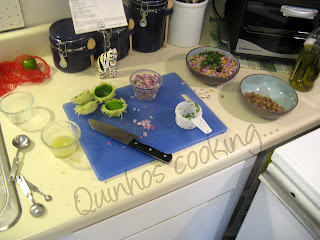 Caption: Lime juice, cilantro, red onion and chicken sausage ready to be mixed with the couscous, corn and beans.
Posted by Metta at 11:25 PM

Love when the boys do the cooking! Kelii made a yummy ginger chicken with rice and salad tonight, so that I could get ready for yoga! What a sweetie! I'm impressed with Marcos' work... very clean and organized! Sounds tasty too! I owe you a call back - tomorrow! lots o' love

woah, you like my photography?! Gosh I'm even blushing. thanks for the compliment voce eh um doce!
beijinhos. Damaris