This year we were back on schedule for our annual tradition of having Thanksgiving up in New Jersey with my dad and Emili, and Emili's parents, sister Carol and her family, and my dad's friend Mike from high school in Hong Kong and his family.  Last year little Orion had just been born and we opted out of the long drive, so this was our first year introducing both of our children to the clan.  We drove through the night on Tuesday, and the trip was surprisingly quick and doable, considering that it was 9 or so hours through the non-stop rain and pitch black night.

Wednesday was a day of preparation and cooking, but on Thursday morning, per tradition, we bundled up and drove over to the lake.  Some of us ran a few miles, some ran many miles, some played at the park, and some were wretchedly cold and miserable (my kids).  It was a very, very cold morning. 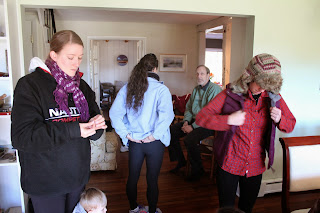 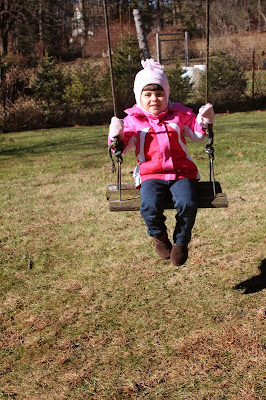 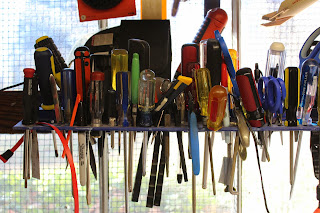 When we got home and started working on the meal and the kids were taking a nap, I couldn't find Marcos for a few minutes.  He was down in the basement with my dad, in his shop with a kazillion tools and computer parts.  Marcos switched over to Macs a few years ago, but my dad has stuck with PCs, because for people who like to tinker and fix things, Macs are useless because they don't break! 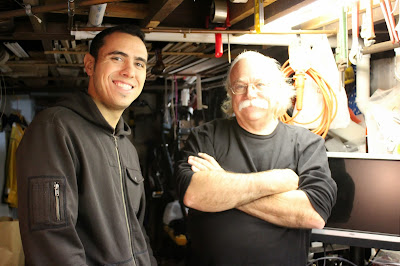 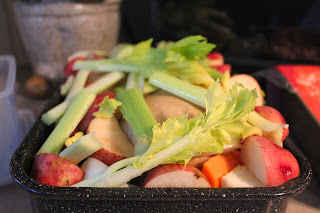 And while the guys were talking shop, Emili and her sister Carol were preparing the tofurkeys and the celebration roasts.  Although most of the group is vegetarian, their friend Monica and I also roasted turkey breasts for the carnivores.  And while we cooked, Gigi was in heaven with Monica's daughter Evelyn, and Carol's daughter Emma, who entertained her with the rainbow loom, photos of recent high school theater productions, and coloring. 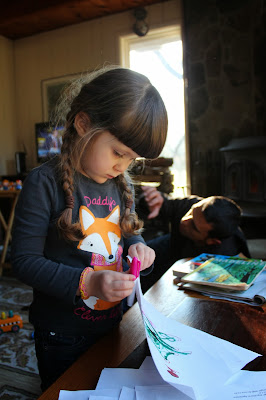 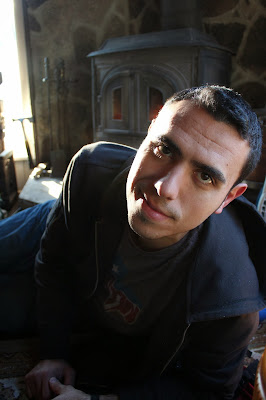 Marcos had worked his tail off before our trip so that he wouldn't have to disappear and work on school projects over the break.  It's been such a busy semester that having his attention and help was really, really nice.  I campaigned for years to get Marcos into school full time, and now that he's doing it and we're nearing the end of this chapter, we are so, so happy to be finished in the spring.  It's been a long and arduous journey. 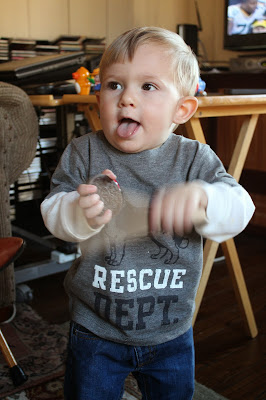 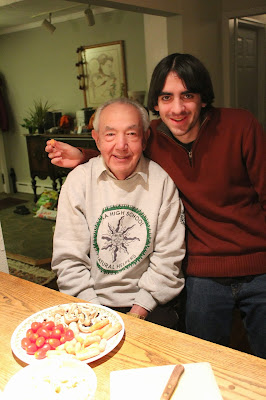 Grandpa Mike with grandson Ben.  Mike and his wife Sylvia are Greek and the kids call them Papou and Yaya, so Gigi joined right in.  They were a real blessing to me this year.  We are the only ones with small children, and so I was hyperaware of Gigi and Orion's volume, their tendency to touch things, their total KIDness and how that was impacting the group.  But every time I talked with Mike and Sylvia, they had nothing but kind things to say about how amazing our kids are, and how well they treat each other, and how clever they are.  I don't know if it's true or not, but it was one of those times when I needed the vote of confidence from two wise and experienced grandparents.  I was so happy that they came. 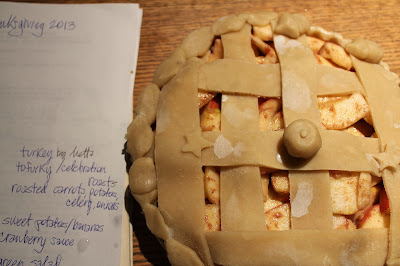 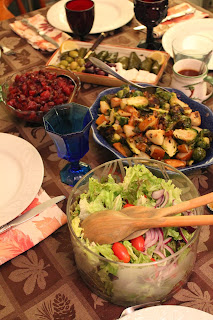 The spread was incredible as usual this year.  A new family favorite was a dish of roasted bosc pears and brussels sprouts that Carol made.  I need to get that recipe! 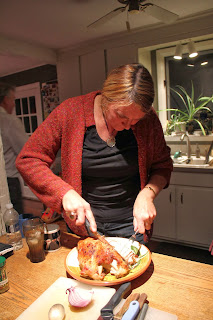 Above, Monica does the honors with the turkey, and below, Monica, Evelyn, Emma, Carol, Sean and Nathan sit down for Thanksgiving dinner. 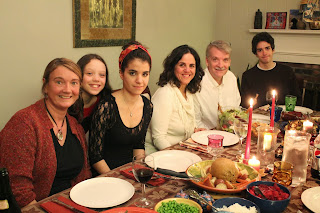 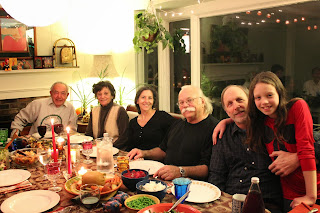 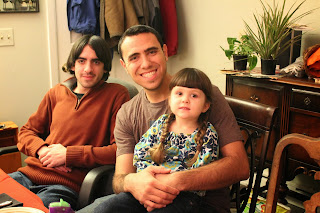 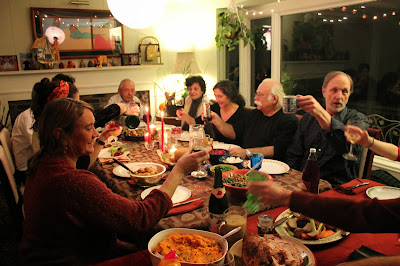 Cheers!  To family, friends, and always having enough. 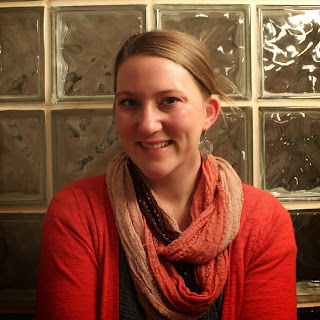 And so, that was our Thanksgiving meal!  We followed dinner with Emma's homemade apple pie, Nathan's to-die-for chocolate pecan pies, a sweet potato pie, ice cream and fancy chocolates.  Are you getting hungry yet? 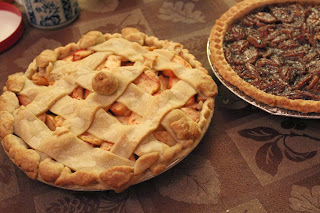 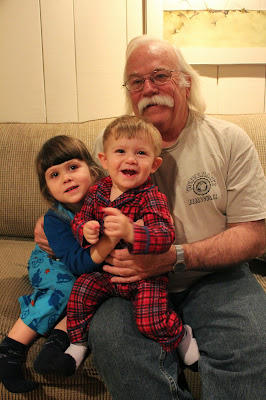 Thank you Dad and Emili et al for a really nice Thanksgiving holiday.  We sure do enjoy spending time with you.  Next up: our trek into New York City!
Posted by Metta at 12:09 AM