I'm feeling sentimental tonight.  It is my first night alone, of many this summer.  Marcos has an internship in Charlotte working for a company called Premier, and since the commute is over two hours from here, Chapel Hill is going to be his weekend home, and he'll stay in Charlotte at our friends Aline and Dwight's home during the week.  I have friends who function single-handedly with even more kiddos to balance, so I am trying not to complain, but this will definitely be an experience.  I miss Marcos something fierce already, and it's hour number two. 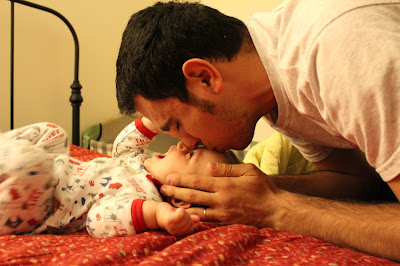 This internship is something of a miracle, really.  Marcos had applied and interviewed for internships with recruiters from big-wig companies all last fall, but one by one we received the news that he was not one of their final picks.  Considering that Marcos has 8+ years of work experience on the other students who were also applying, and well gosh, he's Marcos the amazing, we were starting to wonder if something was just wrong.  Finally a company had the courtesy to tell him that he was not a good fit for their internship because he was too over-qualified, and that he would get on a better track in their company if he just waited until he had graduated, and then applied for a higher level job.  Then another company said the same thing.  Oh.  Well, then.

Then Dwight asked Marcos one day if he wanted to be an intern at the company he worked for in Charlotte.  Marcos applied and interviewed, and again he was not a good fit for their current internship program, but this place knew gold when they saw it.  They created an internship just for Marcos, and had him apply.  It is the only technical internship they have this summer, out of 31 different positions filled by undergrads from around the state.  Marcos will be programming, and working with the big boys.  Or at least, that's how I understand it.

And so that is where you find me - somewhere in between grateful for this opportunity, and frightened that I may go out of my mind this summer without my usual team player.  When I say that it is a 12 week gig it sounds doable, but someone today translated it into the words "three months" and it sounded forever long.  One entire quarter of a year.

We always knew that Marcos was too awesome. Congrats on the intern, but we also feel for you on the distance.