Today I took Orion to his two month check up.  I am definitely not as obsessed this time around with percentiles, but here's an interesting tidbit: even after the 3 ounces he lost on the scale by going pee pee all over the wall, trashcan and floor (they weigh babies without diapers to get an accurate measure - oops!), he was still in the 65th percentile for weight.  He's just the perfect size. 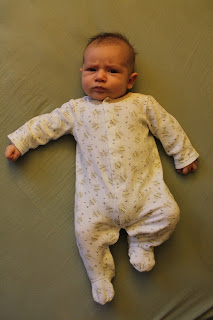 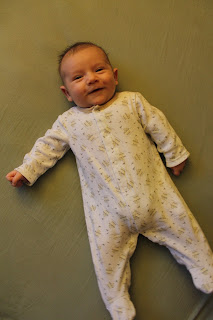 As far as babies go, Orion is really very mellow during the daytime and really very tricky late at night.  During the day he still sleeps the vast majority of the time, and my Haagen Dazs milk can satisfy him for a good three or four hour stretch.  If I feed him right before a social activity, we can sometimes show up, have fun, and leave without anybody knowing there was a baby sleeping in that carseat we carry around.  At night though, it is a different story.  Generally we spend an hour or two between 11pm and 1am trying to help him settle.  He doesn't scream like he's in terrible pain, but he does cry a lot.  The crying will let up a little when we put him in a new position, but after a minute or two it's back to the drawing board.  It can be extremely exhausting. 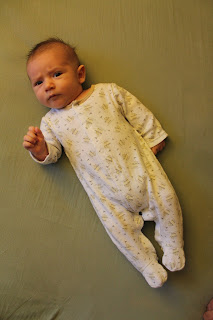 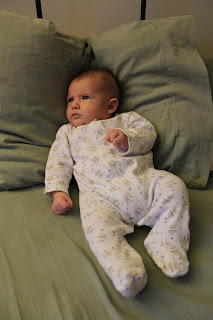 So, the news in mommy land is that this week I am working myself off of dairy to see if his late night discomfort is a byproduct of my dairy intake.  I say "working myself off of" instead of "quitting" because I tried to quit today, and slipped up at least five times because stopping dairy is IMPOSSIBLE if you are not used to thinking about it.  My goal is to be dairy free by the end of the week, but I'm being gentle with myself.

But I still haven't figured this out: if you don't eat dairy, what DO you eat?
Posted by Metta at 12:28 AM

I feel your pain! Went dairy free when bfing K and thinking about doing it again for A. We eat a lot of meat and veggies, and then we substitute dairy in recipes. Almond milk, goat milk, coconut oil, olive oil, earth balance spread, soy yogurt, etc. Unfortunately, I haven't found a great substitute for cheese. Good news is that it helped with loosing weight after K was born!