Just four months away from TWO

It's time for a Gigi update! I've been wanting to capture who she is right now, because she is learning and changing so fast that each stage seems to fly by very quickly. She is now 20 months old, and I can't believe that we are four short months away from TWO! *Sigh* 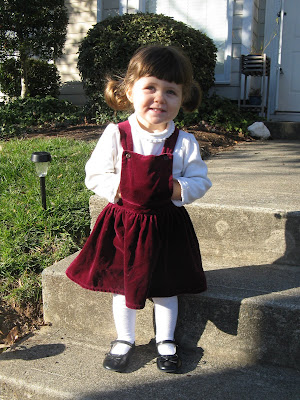 When I was young I used to organize my Tutu's canned goods cupboard into categories for fun (I didn't have siblings, remember?), and I think that organizing has stuck with me. I seem to like approaching Gigi's development by categories. It helps me to remember the things I want to remember.

Gigi is becoming quite a talker. The other day I think we actually had a conversation...

Gigi: Let's go!
Me: Okay. Where should we go?
Gigi: Hawaii
Me: Oooh, Hawaii? What should we do in Hawaii?
Gigi: Walk!

Gigi is also starting to put together simple sentences. The other day Marcos went to work with his friend Matt, and Gigi looked at me in the morning and asked, "Papai?". I told her that he had gone out to help "Tio (Uncle) Matt". Throughout the day, whenever Gigi thought about her Papai, she pointed to the door and reassuringly told me "Papai ajuda Tio Matt". 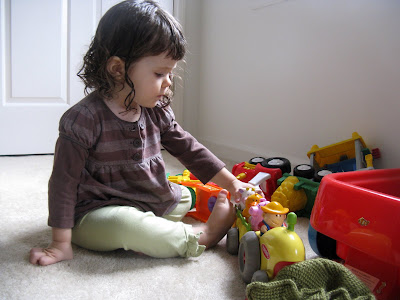 When I'm not prompting her, Gigi can sing the entire musical octave (not on key, but hey). When I try to help her, she rebels and starts to sing "Do, mi, mi... mi, sol, sol".

Gigi knows a handful of letters. We have magnetic letters on the fridge and it is fun to look at them during snack time. The other day she was looking at a book and said, "Double Yu!". I looked at the page, and was surprised to see that the versal was indeed a beautiful "W". Because Marcos, my mom and I all have days that we are with Gigi, surprises are common because she is learning different things from each of us. 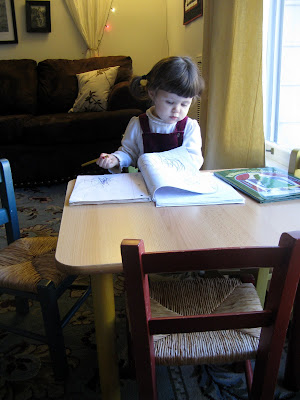 In Hawaii, all little kids grow up learning "Pupu Hinuhinu", which is a Hawaiian lullaby about shiny pretty shells found at the ocean. Well, I unintentionally created a Pavlovian link between this song and Gigi making poopoo. She is fairly regular, but when we're on a deadline and I'm trying to get things moving I put on the song, walk away for a few minutes, and without fail...

When Gigi passes gas she has carried on the Prieto tradition of saying "Passa Lulu!" (Shoo, Lulu!). Historically, this was the way for Marcos' paternal grandparents to blame it on the family dog, whose name was Lulu. We're still not certain if Lulu the dog ever actually existed.

Gigi is fixated on peanut butter, birthday parties and candles, Elmo (sigh...), the little table and chairs set we just bought her for Christmas, agua (her imaginary scene where she says she is in a boat now includes dolphins in the water, and she has added an element of swimming), talking on the pretend phone with her Tutu, chocolate, reading books, and her red painted toenails. 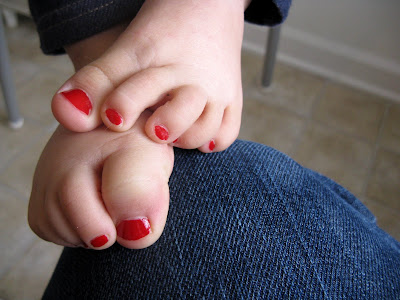 A month or two ago, we left a friend's house and Gigi cried all the way to the car because I made her give back a stuffed dog that belonged to her friend Emerson. As we were leaving their house I told her, "Gigi, we can't take that wow wow because it's Emerson's wow wow". Suddenly the light clicked on. For the ten minutes on the way home she kept repeating in an awed voice, "Emerson's wow wow... Emerson's wow wow". Since that day, she has been careful to label things according to whomever owns them. Tutu's toothbrush. Papai's socks. Mamãe's juice. Gigi's table. Fortunately, "my" and "mine" haven't come into her vocabulary yet.

She also recently started using the word "too". "I sitting too". I think she might have it confused with "two" because if she sees you do it and you are number one, and she does it then she is doing it two/too, but that will get ironed out in the wash. I am just amazed that she is as verbal as she is. She is a girl who knows what she wants, so I'm hoping that by the time she hits her really colorful stage, she will have the tools she needs to communicate and continue to rock our world!
Posted by Metta at 1:00 AM

Gigi and Addie are so similar. It made me laugh when I read this post. I think this is such a fun age. Addie loves to sing and I like Colbie Calait :-) Addie is into alphabets too and I love it! I wish you guys were closer!!