A few months ago when I was still pregnant, my friend Chelsea told me one day that in light of all of the time Marcos and I have spent with everyone else's children and babies over the past few years, she wondered what would come as a surprise when we had our own. That thought has stuck with me, and after more than a month of being a parent, I've come up with a few ideas.

But I'm sure that I am barely scratching the surface. 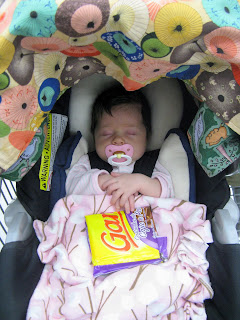 One thing that has not be surprising? Gigi's obvious love of chocolate. Here she guards the Brazilian chocolate while she sleeps...
Posted by Metta at 5:20 AM

the feeling is the same and my baby is 8 months (today!). Now Maria Aurea puts everything in her mouth. the other day we had a yelling match, she won. She was sucking on some crystal pieces that Enzo had from like a million years ago and I was sure I had thrown it all away. Nope. she loved sucking on the pointy glass and I freaked out. I kept telling her, "my purpose is to keep you alive and YOU are not cooperating" and she kepy saying blha bha ahhhh dada. Not sure what it means but I bet it's important.

Damaris, it probably went something like "Chill out Mom!" :)
Metta, the surprises just keep on coming. You guys are such great parents, and Gigi is just delicious, and not just because she's holding the Brazuca chocolate :)

Metta, you will be soooo grateful someday that you can look back at these thoughts and reflections! The first five months with Andrew is a haze. I don't remember a lot because of a combination of my calling at the time and sleep deprivation. I just love these thoughts and surprises you shared...its brought back so many wonderful memories!!! You are already an incredible Mom! :)

Thank you, metta. I loved that. I am loving watching you be a mom...