I try to choose my addictions well.

Which is why it was more than ten years after the Harry Potter books came out that I gave them a whirl. As the world around me spun into disarray and sleepless nights, I decided that I would wait until I had a significant amount of time to dedicate to reading before I got into the world of Wizardry.

The summer after Marcos and I got hitched was the perfect timing. We knew that we would soon be moving to North Carolina, so we were only loosely employed and had a lot of time to spend together. In the evenings, we listened to all seven books narrated by Jim Dale, which was 116 hours of pure bliss, made more blissful by the fact that we multi-tasked and accomplished a number of mindless projects while we were entertained. Because of Marcos' summer-long bout of mono before his sophomore year in high school, he had spent months reading Harry Potter, and knew the books inside and out. How could I dislike a series of books that endeared my husband to reading as a teenager, and expanded his vocabulary in the English language? Even if he does think the real name of the tree is "Womping Willow". 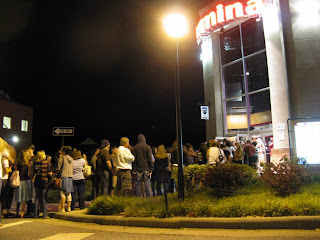 Harry Potter and the Half-Blood Prince, sneak preview at midnight-o-five this past Tuesday night. We went with our new friends Ertle and Krista, and I see that I didn't take any pictures of us. We didn't look half as interesting as some of the others waiting in line. 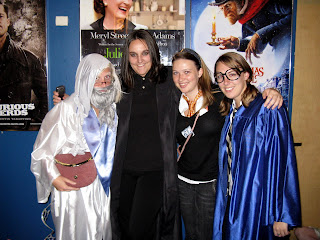 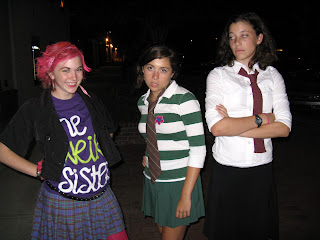 We all liked the movie. I really am the worst to ask because I couldn't remember any of the details of the book anyway, but the others who have functioning memories loved it. I was disappointed by the lack of closure at the end, but Marcos reminded me that the book ends somewhat abruptly too. Apparently book seven is being made into two movies, so hopefully all of the excitement will be played out really well in the near future. As far as the acting goes though, we were so impressed. We are still not sure that the Dumbledore in the movie quite does the book version justice, but he's the only one who is questionable.

So, we highly recommend seeing it if you have the chance! The movie ended at 2:37am, and I wanted to sit through another hour or two, it was so good.
Posted by Metta at 12:27 AM

Okay, I have never read the books! I know, I know. But I kinda wanted to wait until I could read them with my kids. Now I really want to read them now. Maybe I'll do it this winter (it will be my first real NYC winter - cold cold COLD!)

PS- thank you so much for your wonderful comments! You are such a good friend. I love the advice you gave - I'm totally going to do the super hero thing with a new toy. I have so much to learn about parenting.