Luca just turned 1 on January 17th!  To celebrate his birthday, we invited our neighbors over for cake and ice cream, and it was the perfect gathering.  I made my best chocolate cake, and bought many flavors of ice cream to please the masses.  Luca was definitely satisfied with his slice of goodness, which he royally destroyed!  I remember that Gigi barely knew what to do with her cake at her 1st birthday, because as a first child she had not had much exposure to sugar.  This guy, on the other hand, dug in without pausing a second, because, as I like to say...  "third child"...  With two older siblings and plenty of their friend's birthday parties to attend, he has had plenty of cake before! 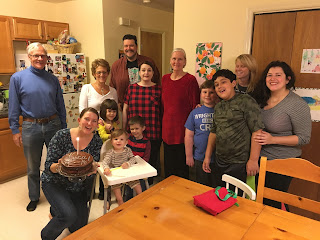 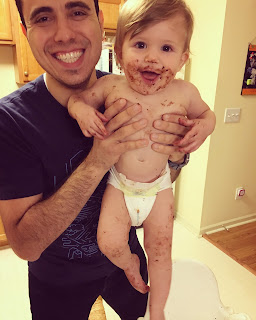 Luca Armand is a stunner, and I'm not sure if I think he's the most adorable Prieto, or if it's just because he's a baby with an oversized head and he doesn't talk back to me yet?  Probably the latter.  In any case, this boy started walking at about 11 months, he's always been a great sleeper and eater, and he now has 8 teeth, which he sometimes tries to sharpen on my shoulder!  He is into EVERYthing, and goes EVERYwhere, and I've been therapeutically talking to myself, and reminding myself that the next few months (until he starts to understand language) will be particularly tricky.  I have to admit, despite my adoration for the kid, whenever he goes down for a nap in the early afternoon I experience a wave of relief!

But there is also that funny and exciting realization that as he passes through different developmental stages, this is our last time having a kid who is THERE in that spot.  He is our last kiddo, and he is bringing up the rear, so the closing of each chapter is the last of its sort.  Luckily, we could not ask for a better kiddo to end on.  We love this big bear.