It's a Boy! The Gender Reveal Party

Back in August, Marcos and I went in for the 18-week ultrasound appointment to look at our baby's anatomy and discover whether we were having a boy or girl.  When Marcos' friend and coworker Jamie found out that we were going to find out our baby's gender, she insisted on throwing us a small Gender Reveal Party at the Carolina Alehouse after work on the day following the ultrasound appointment.  She and Jeremy, Marcos' really close friend at work, are dating, and they stayed up late the night before creating a truly amazing gender reveal cake.  Since this is our third child and we already have a boy and a girl, we didn't expect anything special for this little one, and so we were tickled that they were so into the idea of a little gathering for baby #3! 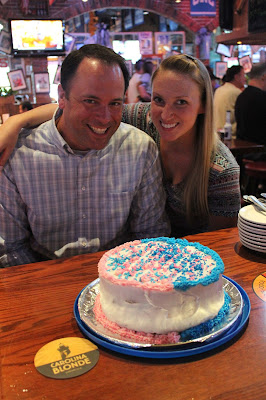 Above are Jeremy and Jamie and their masterpiece.  Below is the true reason that Marcos' coworkers choose the Carolina Alehouse after work for drinks and get-togethers - the foosball table.  Yes, it's kind of a thing and there is a lot of talking smack around this "sport".  Hey, for some guys it's football, and for a bunch of computer nerds, it's... you know, foosball.  Below, Jeremy and Brantley take the game very seriously as Orion and Gigi learn from the big guys. 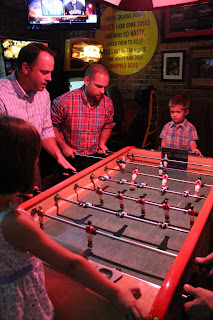 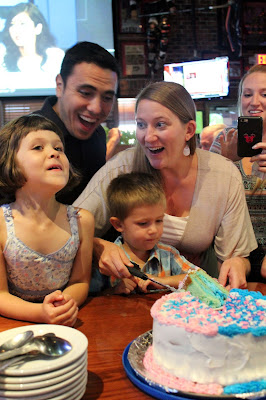 And then for the moment of truth.  The party was mainly for Gigi and Orion, who didn't know what we were having - we cut open the cake and inside it was....  blue!  A boy!  Blue cake and in the middle, a carved out cave stuffed with blue m&ms.  And then Gigi did the most horrifying thing - she immediately stuck her hand into the cake to grab fistfulls of the candy!  At the time I was mortified, but recently a friend was telling me about how she made a similar cake at her son's birthday party, and when the first slice was taken out two kids at the birthday party did the exact same thing.  So maybe it's a primordial kid reaction to finding themselves in front of a cake filled with m&ms... 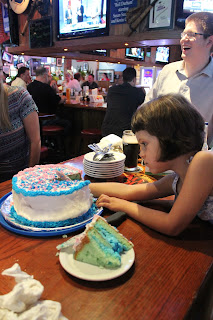 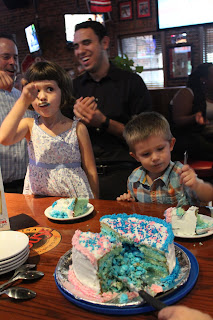 It was so incredibly thoughtful of Jamie and Jeremy to throw us a little party in honor of our baby.  Not everyone who came made it into these photos that I included, but it was a nice group of Marcos' close friends.  Always a joy to hang out with these quality people!
Posted by Metta at 1:00 AM