In April our big girl turned 5 years old!  It felt like she had been 4 for an awfully long time, and it was high time to move on.  Especially since she has been the youngest in her class this year, and age is such a vitally important thing to a Kindergartener, I think Gigi was ready to feel on par with the rest of the crowd.

Since her birthday fell during spring break, we did a lot of fun things that week and called them birthday celebrations.  On the morning of Gigi's actual birthday, we went hiking with Tutu at Johnson Mill Creek.  Gigi said, "I never want to come here again!" which made me think, "Wow, we really need to take the kids hiking more often".  (See how I did that?  Mean mom). 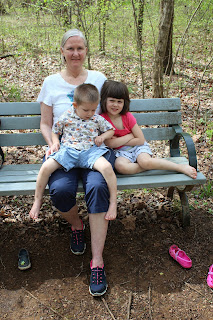 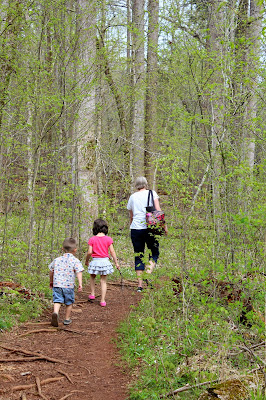 After soccer practice that afternoon (where we shared cupcakes with her soccer friends) and a sushi dinner out on the town per Gigi's request, we came home to presents!  That got an enthusiastic thumbs up. 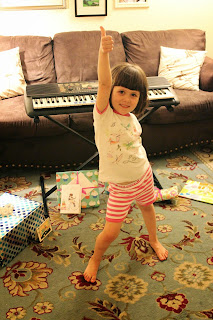 But the celebrations just kept on going.  The week after Gigi's birthday we celebrated at her school, and the tradition is for parents and siblings to come and bring a few photos and talk briefly about their little one's life.  Gigi was very proud to show her school friends the photos from her infancy.  The kids baked a birthday cake for snack, there was a sweet advancing-through-life ritual, we brought fruit to share, and Gigi got to pick flowers in the yard and decorate her beautiful cake. 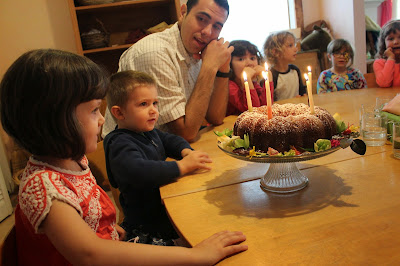 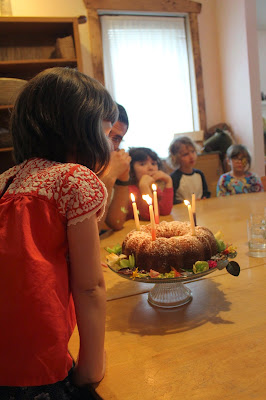 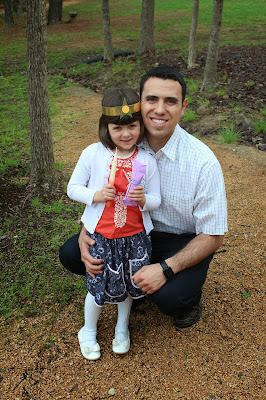 I am so glad that Marcos was able to join us for Gigi's birthday celebration!  Since he is working a 9-5 type of a job, the parental presence at Emerson Waldorf School this year has primarily been my own.  It was fun to be there together as a family on a school day. 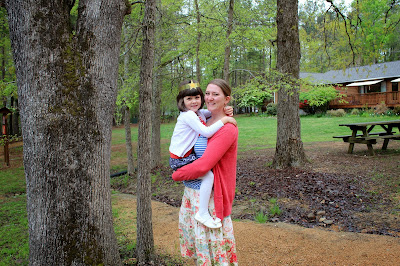 And then at the beginning of May we threw Gigi a birthday party!  It was in true Prieto form - cupcakes at Wilson park with a whole lot of people.  I tried offering her the "you can have a party... OR a really exciting, fabulous, super fun, amazing night as a family at a HOTEL!" trick, but she would not be swayed.  She wanted the party.  This was the first year that Gigi really wanted to do a themed party (some of her ideas were a blueberry party or a Marilyn Monroe/Pop Art party) but when I told her that we could either do a small party with a theme or a big party at the park without a theme, she quickly went for the big party.  Atta girl!

This was also the first year that we hosted not only neighbors and church friends and college friends, but the Waldorf crowd as well.  Only two of her classmates were not able to come, so we had a blast merging our worlds and the people we love! 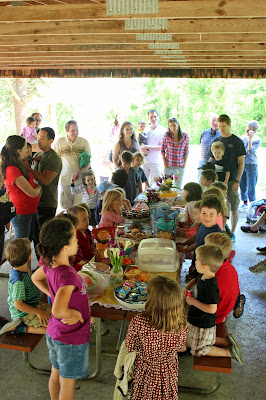 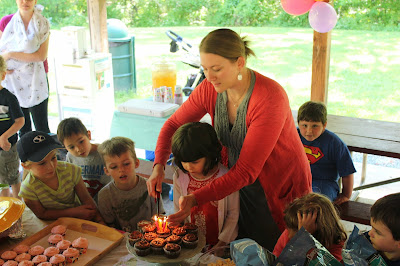 With over 80 people and 5 varieties of cupcakes, I received a lot of compliments and awe for the time I had spent baking in preparation for the party.  But if any compliments were deserved it was simply for my talent at delegating - my sweet friends were happy to help out and brought goodies for the spread - we had chocolate cupcakes, red velvet, strawberry with homemade strawberry frosting, carrot cupcakes with cream cheese frosting and banana muffins with chocolate chips.  It was a cupcake feast!  With a lot of other healthy snacks that friends had brought to share, of course. 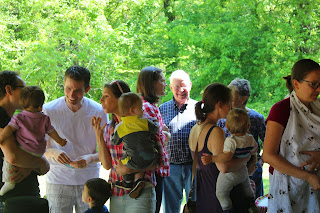 The main attraction after singing and cupcakes were the water balloons.  I delegated the water balloon games to Marcos, and he was awesome at rounding up the kiddos, as usual.  After some pairing up and fun back-and-forth toss games.... 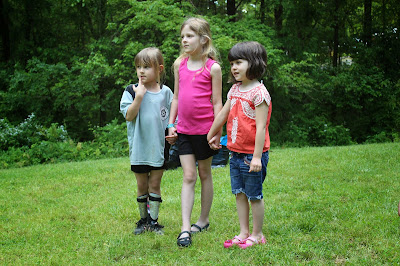 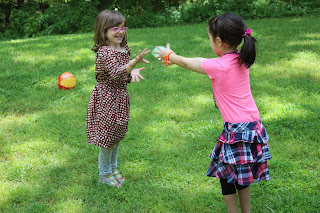 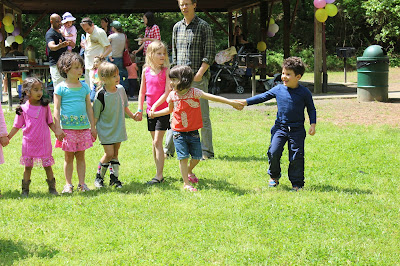 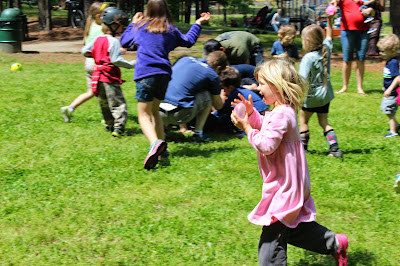 After all of the hundreds of water balloons had been popped, Marcos led the kids in a traditional Jedi ritual of scanning the territory for pieces of popped balloon. 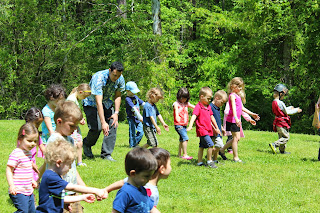 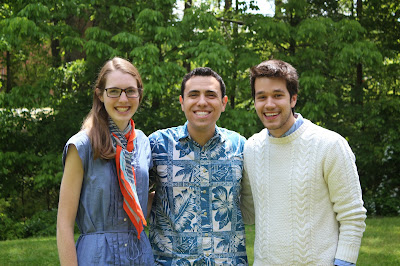 And finally, here is Marcos with a few of his best buds from college, who came to celebrate Gigi's birthday with us.  It was such a fun party.  Thanks Gigi for making us such happy parents.  We love every little inch of silly little you! 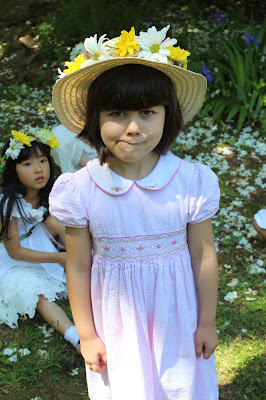 And lest you think you can get away with reading a post of my children that doesn't contain any quotes, here you are:

Tutu: Thank you for having a birthday, Gigi!
Gigi: Don't thank me!  Thank mom and dad because they made me at just the right time!

One night when Marcos was doing bedtime routine and asking Orion to comply with some orders...
Orion: Poppy you are not the boss!
Marcos: Oh, then who is the boss?
Orion: Mommy is the boss!
Gigi: And you are the assistant, right?

One night, after we left the home of some close friends, Gigi was having a particularly quiet moment in the car...
Gigi: I am sending a message with my heart. I am sending a message to Kate and Amber's hearts.
Metta: Oh. What is your heart telling their hearts?
Gigi: Well there were some things that I forgot to say. Like, thank you for having me over and thank you for the delicious lasagna...

One day, just because I wanted her to know...
Metta: I really love your father.
Gigi: Thank you for loving him.  I really love him too.  We should all love him.

While planning out her future...
Gigi: Some day I will be a famous artist.  And I will work with my husband.  I will be a worker and my kids will go to daycare!

One afternoon, zero went the way of Pluto...
Gigi: Zero is not a number.
Metta: Yeah, I think it is, honey.
Gigi: It's a dwarf number.  It's really little.