For the past two weekends, we've been at Jordan Lake enjoying the last warm summer days with our friends. For nostalgia's sake I was looking at my photos from our trip to Jordan Lake last year, and I had forgotten what a chubby little baby Gigi used to be! She sure has slimmed down since she has been walking and running and dancing.

Our trip to the lake two weeks ago was a birthday outing with our friends the Hills and their 5-year old birthday girl, Kinsey. We have been friends with the Hills for about three years now, and I'm so glad that their move to Raleigh last year hasn't slowed down our friendship. So many of our great memories here in North Carolina have included the Hill family! 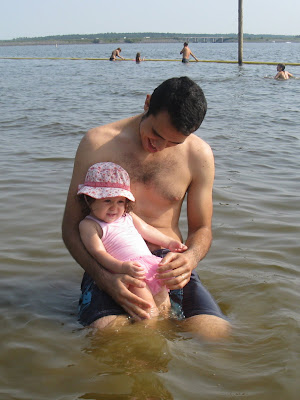 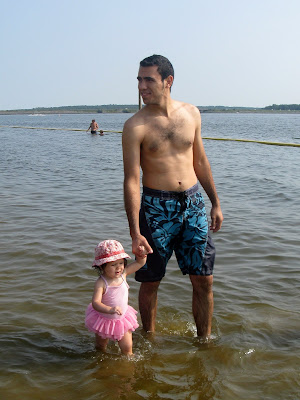 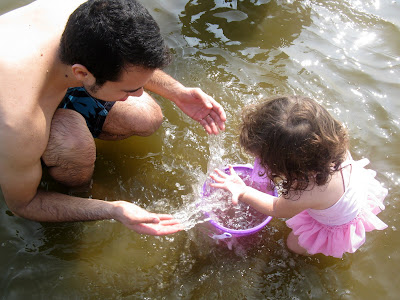 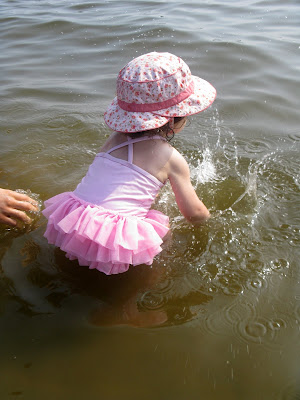 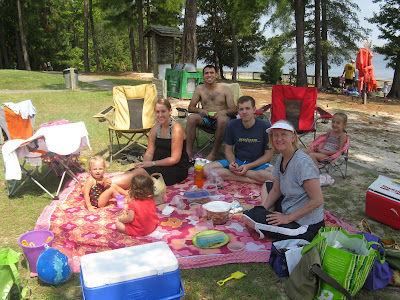 Here we are with our picnic spread. Kim had a brilliant suggestion this year, and requested that she and Jason bring wraps for everyone (grilled veggies with hummus sauce! YUM...), and we bring other sides to share, instead of each of us bringing our own sandwiches, and everyone having to do so much work. We made our favorite Mediterranean Pepper Salad and our new favorite oatmeal chocolate chip cookies, and my mom brought genoa salami slices with smoked gouda on super delish crackers with sliced apples. It was an amazing spread, and nobody had to work too hard!

However, I am so embarrassed that this photo is the only one I took of our group, or anyone besides Gigi, for that matter! She is such a quickly moving target nowadays that I no longer trust that my camera is really getting any clear shots, so I spend way too much time behind the lens taking just-in-case photos. We really need to invest in a better machine so that I can spend more time engaging instead of capturing... 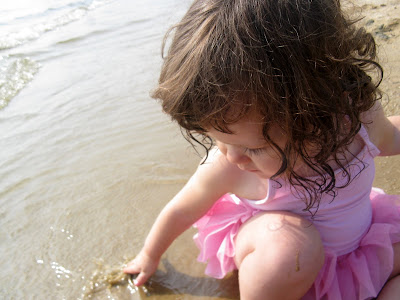 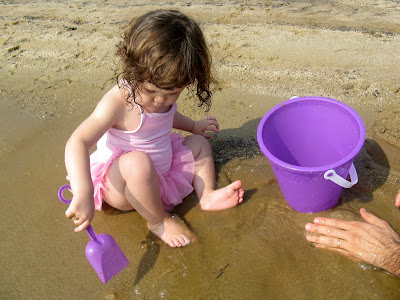 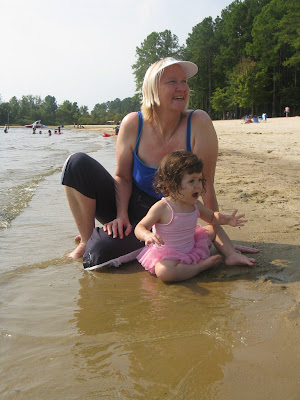 But then again, maybe I just like taking photos of her. 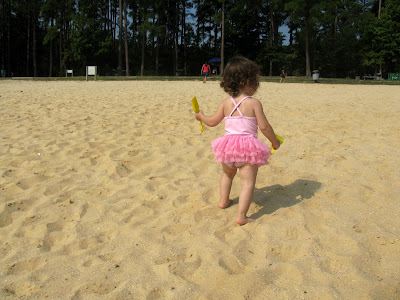 Our trip to Jordan lake this past weekend was for our annual Chapel Hill 1st Ward Campout - a overnighter for our church group, to welcome newcomers and friends, have a chance to see each other with unkempt hair and wearing pajamas, etc. before the school year really gets into full swing. This year, even as late as the night before the campout, we were still on the fence about camping out until my friend Becca said to me, "What are you, wussy? Of course you're staying". And suddenly I was decided: I wasn't wussy, and we were staying the night. Of course, at midnight the following night as we tried to keep Giovanna's wails from waking up the entire campsite I did have some misgivings about our decision, but it turned out that the following morning everyone who was brave enough to camp with little kiddos thought their kids were the ones keeping everyone else up, and apparently our noises didn't travel as far as we thought.

The group camping site where we stay each year is so beautiful. Early the next morning, after a warm snuggly night next to Marcos in the deluxe travel lodge, I woke up first and tip-toed out so that Gigi would sleep far into the morning. At the lake some of the kiddos had already gathered, and were catching frogs. I took photos of the visitors who had passed in the night: tracks imprinted in the sand by deer, dogs and racoons. 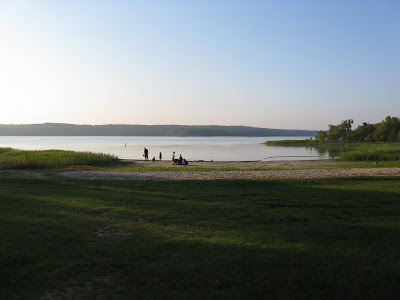 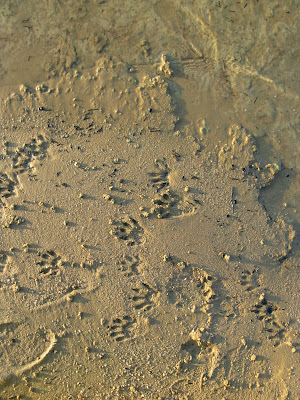 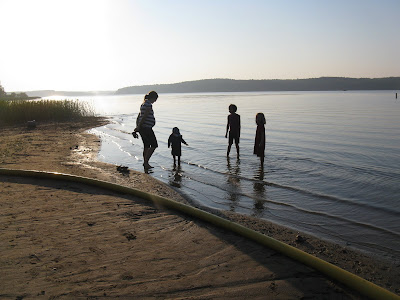 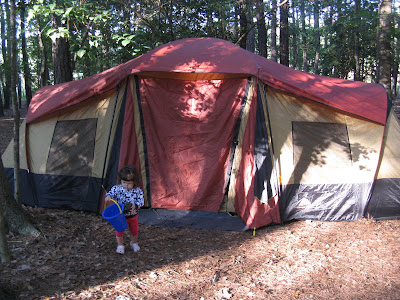 Gigi emerged wonderfully late in the morning from the 3 bedroom XL deluxe travel lodge. Our tent is so huge it really deserves a name. I'll get on that...

Below, the guys take on a plentiful breakfast of pancakes, eggs and bacon. Part of why camping was so nice this time around was because the Sunday School Presidency was in charge of the activity, and they provided and cooked up the breakfast. With a potluck dinner the night before and breakfast taken care of, we were able to bring just a few snacks and leave the coolers at home. It made for relatively simple packing, and breakfast was so good! 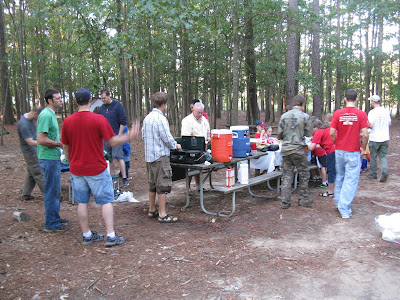 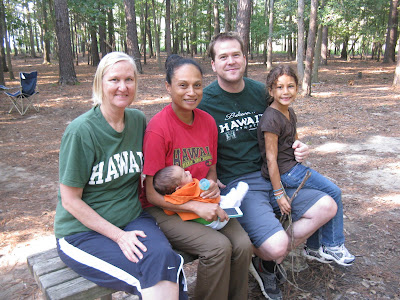 Our new friends the Vance family just moved to the area from Hawaii, and my mom and their crew all just happened to be wearing Hawaii shirts. Some states are just worth being excited about.

As most of the families were packing up and heading out on Saturday morning, my mom kindly took Gigi down to the lake with Becca and her crew so that Marcos and I could pack up the tent without our little one running around underfoot. As soon as they left I had a strong feeling this would happen: our little mermaid just can't look at the water without wanting to commit. On the upside, it was a good lesson in the ultimate absorption capacity of a pampers size 3 disposable diaper. (For the record, the end result of dunking the diaper in the water is a diaper roughly the size of a small fryer hen). 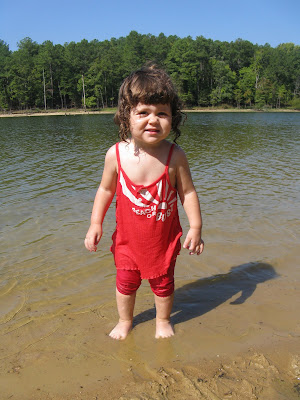 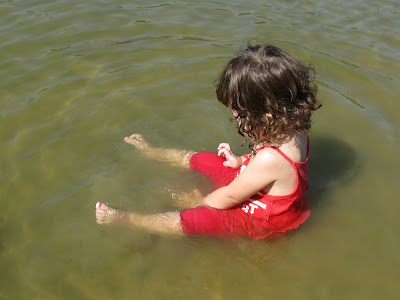 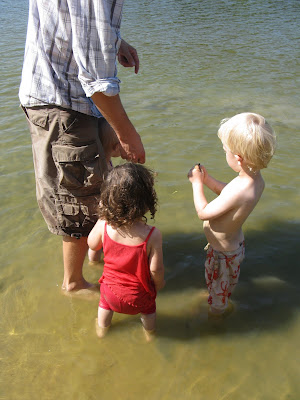 Becca and Stan are my idols of the outdoor world, and of course they had brought their fishing gear along. I think that their little Emerson (top right) could identify and correctly pronounce "bass" and "trout" before he said mommy and daddy. They are so great, and provide such a rich learning experience for their kiddos. 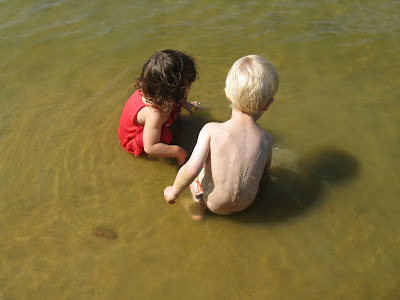 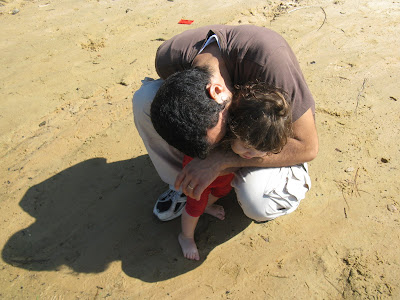 And if we're lucky we may get to camp one more time in the mountains this fall. What a beautiful place to call home!
Posted by Metta at 11:15 PM

metta, thanks so much for your cookie in put. the funny thing is i have gotten so many ideas on what and how to change, not sure where to start. ill post my progress. your family is so cute. i love camping.

What a fun outing (and a huge tent). Dad