In Utah, the grass really IS greener

Looking through these photos of what we did the rest of our summer Utah trip (the part that wasn't devoted entirely to the wedding), has really made me miss the feeling of having the most deliciously soft and cool grass in the world entirely enveloping my feet. Utah is known for being the Beehive State, and for its skiing, and for being the headquarters of the Mormon church, but did you know that Utah also has the greatest grass on earth? Who knew. 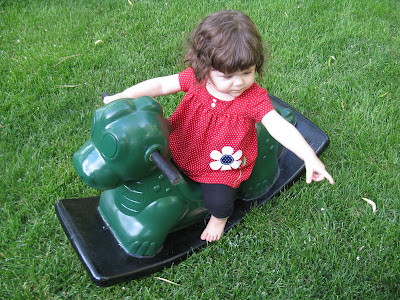 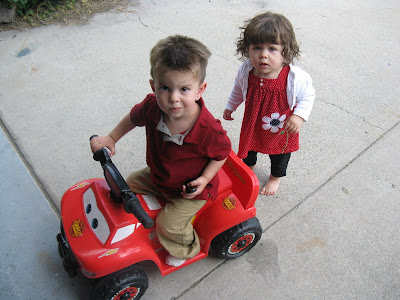 Amanda and Josh's wedding took place smack dab in the middle of our trip to Utah, so once the festivities were over, we still had a week left of hanging out with our friends and family. In these photos, Gigi gets chummy with Kai, my sister Lindsay's littlest boy. It was the first time Gigi had a chance to play with her cousins. 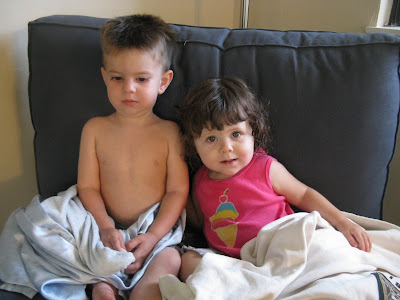 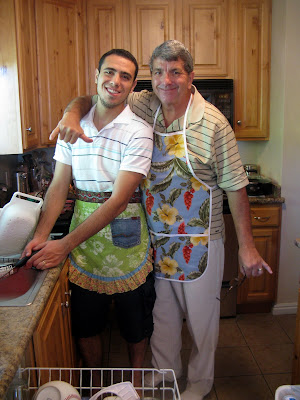 Lindsay and Amanda's dad Steven, other mom Jodi and other sisters Jack and Lilly were also out from Hawaii for the wedding, so Marcos rearranged his morning golfing plans with the groomsmen so that he could stick around and learn how to make the famous pioneer eggs from Steve. It was a great breakfast, thanks to the guys! 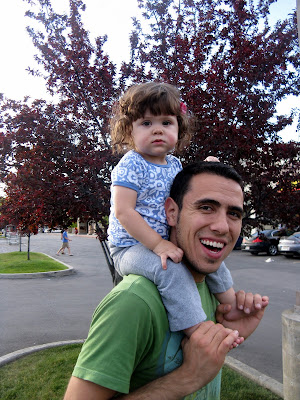 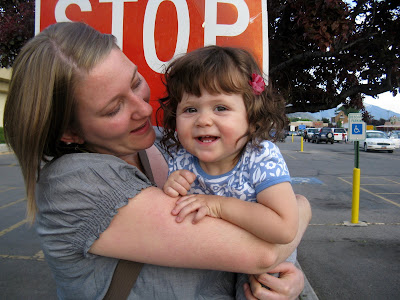 The Plan was for us to spend the better part of our final week with Marcos' brother Danny, our sister-in-law Marie and their little girl Kaitlyn (more cousin time!). Since they live north of Salt Lake City in a town called Roy, and we were in Provo, we stopped in Salt Lake on the way up and had dinner with some amazing friends from our mission. Mike Zeller and I both spent a few months in Shibuya in the center of Tokyo, and became good friends then. Mike and Marcos also knew each other from Tokyo, and we love the beautiful Rui, whom Mike met and married after he finished his mission and started studying at the University of Utah. They also have a little girl just a month or so older than Gigi named Adeline, and I've always wanted the girls to meet and play together. Rui made the most amazing dinner (homemade pita bread and hummus, roasted fish and zucchinis, etc.), and we were left with the impression again that even though we only have a chance to eat dinner together once every few years when our paths briefly cross, we really wish that we lived closer together. 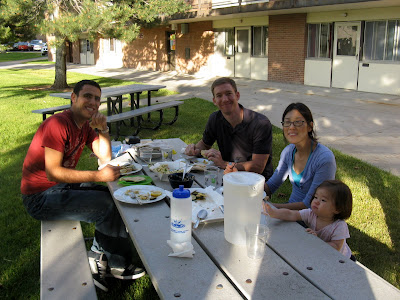 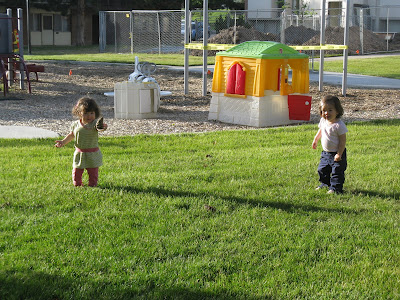 And then we finally made it up to Roy, UT for family time! On our first day with Marcos' brother Danny, his wife Marie (who is expecting a little girl!), and their 4-year old daughter Kaitlyn, we drove to the Gateway Mall in Salt Lake for their sidewalk chalk festival and fair. Marie had organized a great picnic lunch, which was the best way to start off a busy event. 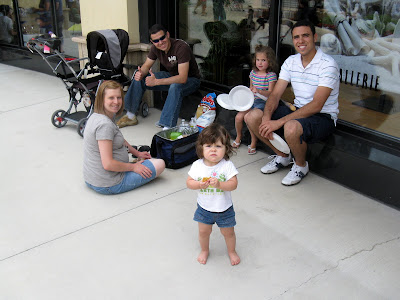 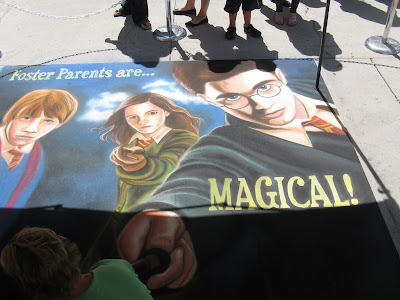 The chalk artists each had a spot of sidewalk to do their work, and the theme of the contest cracked me up: The Utah Department of Social Services was sponsoring some part of the fair, so there was an element of promoting Foster Parenting, and then because of the upcoming release of the final Harry Potter movie, Harry Potter was also thrown in. I love the above "Foster Parents are Magical" - mostly because it is true, of course. There was also a gigantic man walking around dressed as Hagrid, who was such a lookalike to the movie version that I wish I had snapped a photo. 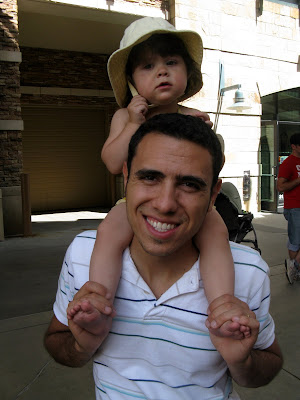 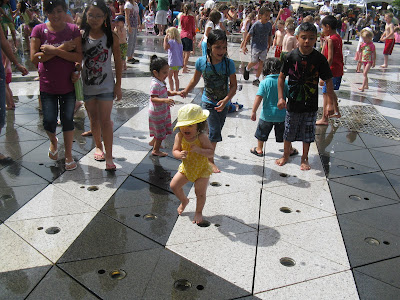 The highlight of the fair for the kids was the fountain in the middle of the outdoor Mall. Some kiddos were wearing swimming suits, and some were soaking wet in their play clothes, but it was a blast watching them run through the water spouts. There were patterns to the shooting water, but as it was a fairly intricate design, it was difficult to tell when the next blast would be. The biggest shock to us was just how enthralled and unafraid Gigi was to run through the water spouts among all of the bigger kiddos, to get shot directly in the face as she leaned over a spout, and to completely love it. She wouldn't let us take her out until we finally put our foot down after a half hour or so, when she was so cold from the water that she was shivering. 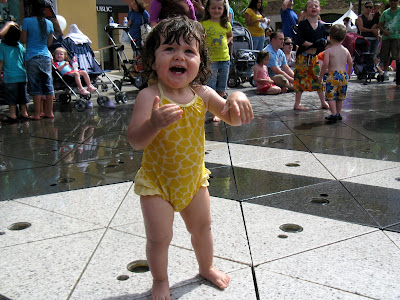 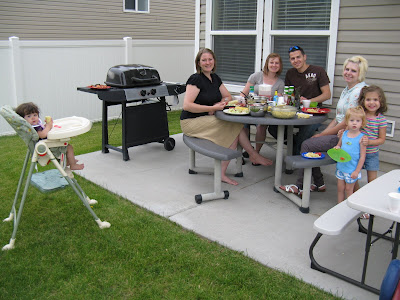 Bar-b-que-ing in the backyard at Danny and Marie's beautiful house. As you can tell, high-quality eating was a grand theme of our vacation. Below, this is us at the high ridge of the indentation in the mountains that surrounds Bear Lake, which is up North on the Idaho border. Marie's family owns a time share at Bear Lake, and they were kind enough to let us stay there for two days of the week that had been assigned to them this summer. It worked perfectly with our timing, and we have always wanted to go to Bear Lake. 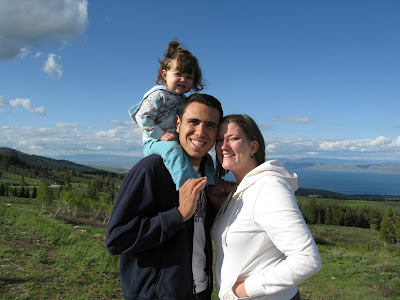 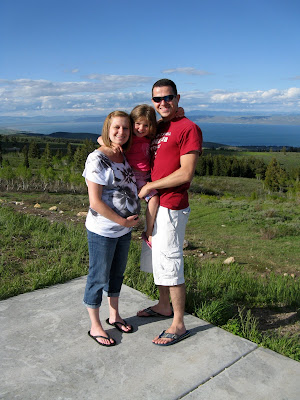 The time share was at a resort called "Ideal Beach" and it reminded me of a lot of the Hawaii Beach homes where I spent Thanksgivings with my family: old enough to have great personality, and perfectly useful in that there was a kitchen with dishes and a kitchenette, and all we needed to make good food and eat well. Danny even brought his portable fire pit, and for lunch one day we roasted hotdogs and marshmallows. 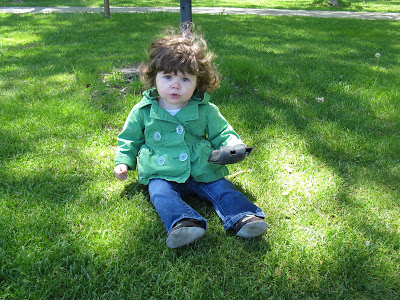 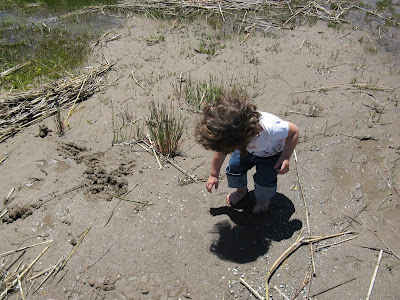 The Ideal Beach resort had a spot of ideal beach, which was a new experience for Gigi. We took her to the beach twice last year when she was a little baby, but we haven't been yet this year and her being a toddler made for a whole new experience. After sampling the sand, she wasn't very impressed, but in case she had made a mistake, she tried it at least two more times. 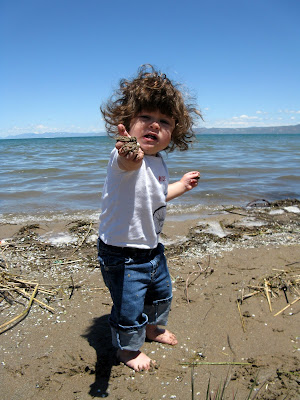 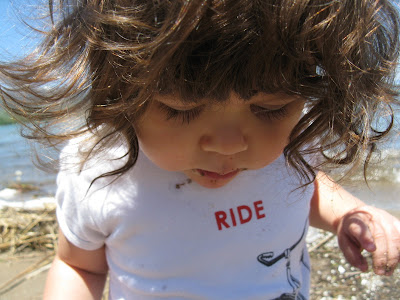 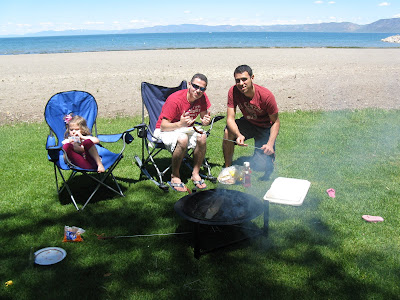 Isn't this beautiful? Family, the firepit, Bear Lake with the mountains in the background, and that grass... Below, Gigi finds the Oreos. Much better than sand! 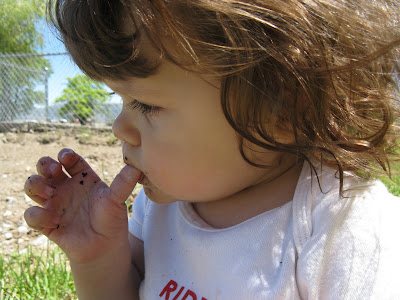 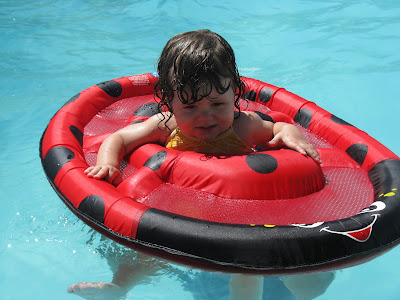 Ideal Beach also had two swimming pools, complete with slides and a kiddie pool. Gigi the mermaid loved the water, as always. 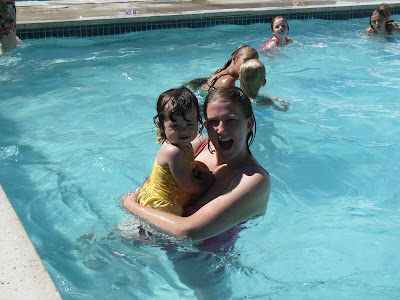 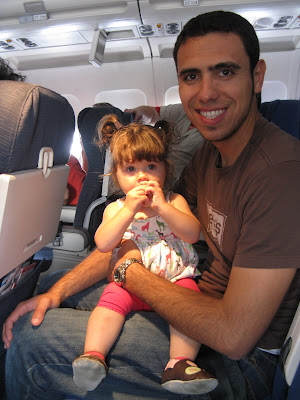 And before we knew it the time had come to pack up from Bear Lake, to pack up from our Utah trip, and to brave two more flights home with Gigi. How did that go, you ask? Relatively well. Things we have learned from traveling with her at this stage are that 1) if there is an empty row on the plane, it is very worth it to ask the stewardess to rearrange ours or our neighbors seating so that we have an extra seat for Gigi to sleep in, and 2) in the future we should not arrange for such early morning flights because waking her up five hours early from her usual nightly rest really put us at a disadvantage before we had even shown up at the airport! We had an entire bag of new small toys for her, and snacks, and yes the ice cubes in a cup trick worked great Jocelyn, so thank you all for your suggestions that you sent in a while back! They were greatly appreciated and made our travels so much more comfortable.

And here I am, at the end of this post, wondering how to summarize our two weeks in Utah, and thank all of you - our friends and family - who let us take up your space, fill your homes and eat your food. We did not step on a plane once last year because of our new addition to the family and because of our finances, and this was the perfect reminder for us of how important it is to keep our ties with our family and friends, and to sometimes splurge on vacations that seem to do little to advance us in the world of material possessions, but do everything to advance us in our relationships.

Because seriously, what better investment is there?
Posted by Metta at 10:21 PM

It looks like a great trip for all of you. Dad

I am glad that we got to see you guys. It was so much fun! I wished I had taken more pictures together!! Oh, I will definitely take your advice about flying with a little girl. We are going to Ohio soon and our flights go to SLC--> ATL and ATL --> Ohio. It's red-eye, too. We'll see how Addie will do... wish us luck!

I've been to bear lake and i like it there. funny how when things are so close to you, like a 3 hr drive you still don't have time to go see them. sounds like you guys had a nice long fun and great trip to utah.