A Big Phony with a Name Tag on

Every once in a while, I have a sudden urge to see a movie that I've already seen. The urges usually fall into one of the following options: About a Boy, Sliding Doors, The Holiday, Dan in Real Life, or the Bourne trilogy. 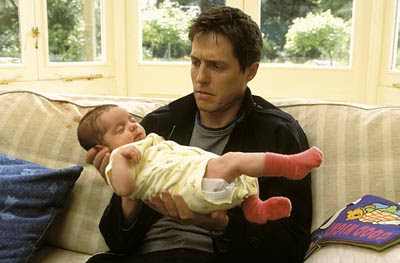 Today was an About A Boy kind of day. On the schedule for tonight was my first time checking out a meeting of the local La Leche League chapter, and so the entire day I kept having visions of the movie scene where Hugh Grant attends a SPAT ("Single Parents Alone Together") meeting for the first time. He invents a fictitious child, and introduces himself as a single father in order to connect with the single mothers and broaden the potential of his dating pool. A big phony with a name tag on.

And that's about how I thought I would feel tonight: like a big phony with a name tag on. But you know what? It went much better than I had imagined. The topic for tonight was babies and sleeping, and although as the childless one I don't think I added much to the conversation, I feel like I walked out with a whole tool kit of new information and ideas. Little by little, the information is sinking in.

Thanks Chapel Hill, for keeping me learning!
Posted by Metta at 9:43 PM

Ah, I love that movie. Actually all the movies on your list. Maybe I'll have to stop by the library tomorrow.

Based on the movies you listed, we will definitely become best friends. I LOVE Sliding Doors (mostly just the parts that involved James). So great.

That's so awesome you sought out the La Leche League! You are SO much more proactive than I ever was the first time around nursing! It will be a BIG help to have a built in support system as you get started! Way to go girl :)